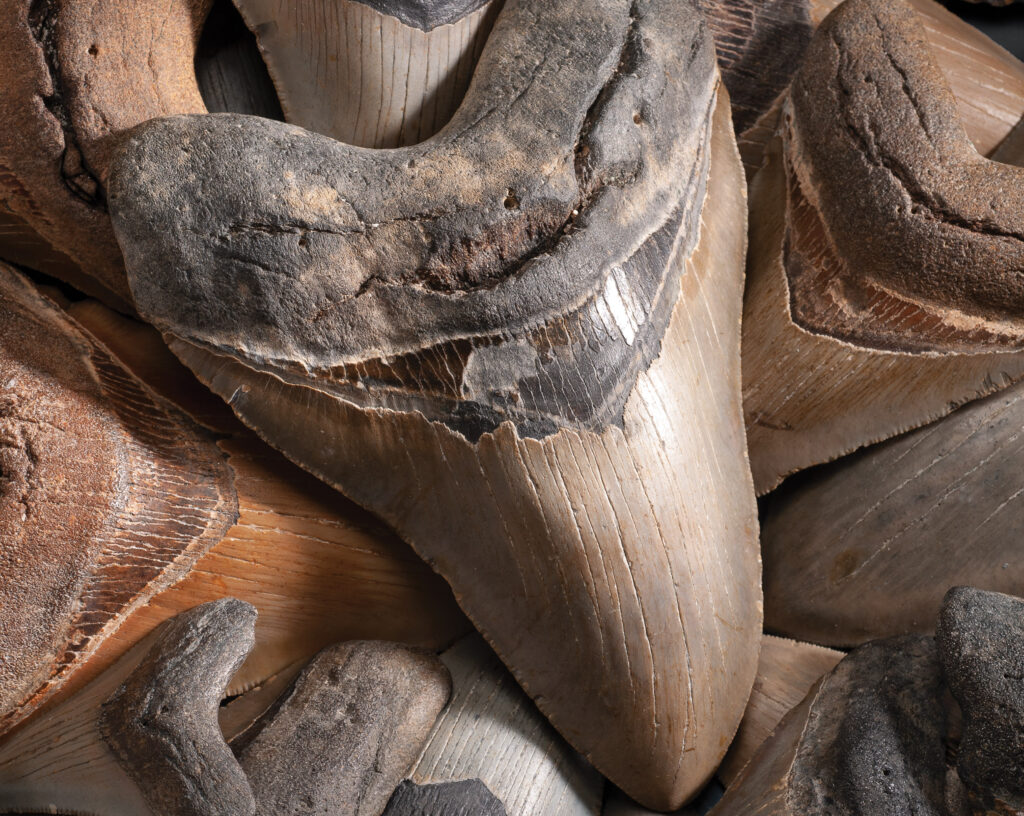 Forty miles out and 100 feet deep off Wrightsville Beach sits a gold mine. A gold mine to scuba divers, that is.

If one is advanced enough to dive the fossil ledges of offshore Wrightsville Beach and reach the bottom, there’s an under-the-sea treasure trove of prehistoric megalodon shark teeth. The teeth are relics from the massive megalodon sharks that existed more than 2 million years ago.

Luke Hammond, a lifeguard with Wrightsville Beach Ocean Rescue, has been a certified scuba diver since the age of 13 and currently holds a divemaster level rating. Hammond found a near perfect six-inch megalodon tooth along the fossil ledges on his second ever diving trip. The tooth is estimated to be worth $1,000.

“Finding your first big meg tooth, it’s exhilarating. I remember when I first saw it I was like, ‘holy…!’,” says Hammond. “It creates an addiction, once you do it, you’re hooked.”

Wrightsville Beach is known in the diving industry as having the largest supply of megalodon teeth in the world, and divers come from across the country. Local charter companies scout out high-volume locations, then transport divers anywhere from 26 to 43 miles offshore — a trip that takes up to 2.5 hours.

“They are in very specific locations where they have collected in large numbers and finding those spots is the hard part. It involves a lot of exploring and spot checking,” says Chris Slog who owns Wrightsville Beach Diving with Brett Garner.

A two-day charter trip in May resulted in finding some promising new areas with plenty of teeth.

“We’ve mapped out a lot of the bottom so we have a good idea where the teeth should be, but the only way to find out is get in the water and search the bottom,” says Slog.

“Disneyland” is what Aquatic Safaris Scuba Center owners Paul Gregory and Michael Winfield have named a fossil ledge spot 43 miles out and 105 feet deep where they scored big one charter trip.

“We just happened to find a spot that was loaded with big, huge teeth,” says Gregory. “We named it Disneyland because of the ledge itself, the amount of fish life, the lobster, the fish; it’s just a beautiful, beautiful place to dive.”

of safe bottom time to search the fossil layers of the seafloor and gather the teeth in a mesh bag.

“They always tell you, ‘Don’t look at it underwater’ because you don’t have much time depending how deep you are,” says Hammond recalling the day he found his 6-inch tooth. “When I got to the surface I knew exactly what tooth I wanted to look at first.”

If a megalodon tooth is 6 inches or more, has serrations, good enamel, a preserved bourlette (a V-shaped thinner enameled band where the crown meets the root) and an intact root, it can be worth anywhere from $1,000-4,000. This has created quite the business for many divers who list the teeth they find on eBay and other online stores.

“Years ago, people would just go out with us and find teeth for fun and now it’s kind of developed more into selling teeth commercial-wise,” says Winfield.

It’s estimated every inch of a megalodon tooth equals 10 feet in length of the shark it came from. Any tooth over 6 inches is considered a prize tooth that likely came from a 60-foot or bigger shark. To put in perspective, 63 feet is the length of a bowling lane.

“One thing we know for sure, if those megalodon sharks were still roaming our ocean there would be no such thing as scuba diving,” laughs Gregory.

Megalodons were the largest sharks to ever exist, three times the length of the largest recorded great white shark. According to the Natural History Museum in London, megalodons had 276 serrated teeth designed for ripping flesh. They ate things like whales with a bite force between 108,514 and 182,201 newtons. Humans have a bite force of around 1,317 newtons.

Megalodon teeth can be found in riverbeds of North and South Carolina, Georgia, and in the ocean waters off Florida and Indonesia to name a few, but not at the high concentrations found off Wrightsville Beach, says Slog. So, why does Wrightsville Beach have so many?

“The answer is actually very long, it involves a lot of science and geology,” says Slog. “But basically, offshore of Wrightsville Beach, the fossil layer has been exposed around ledges in the 100-feet deep range. Then, with the help of ocean currents, sea conditions and hurricanes, the teeth have slowly concentrated in certain spots. For divers it’s a memorable and sometimes unbelievable experience. They’ll say, ‘You tell us they are there and explain how to find them, but once I find it for myself, I just can’t believe it.’”

Every tooth found to be of value by Slog and Garner is sold through their other business, The Fossil Exchange. One 6.48-inch serrated megalodon tooth is listed for $3,600.

More can be found at Wrightsville Beach’s The Workshop (featured in Wrightsville Beach Magazine’s June issue). Owner Audrey Longtin dives with Slog and sells meg teeth at her shop along with the slogan, “coffee with a bite.”

As for Luke Hammond, he’s not selling his meg tooth any time soon.

“It’s just a very sentimental tooth. Maybe on my death bed and give the money to my grandchildren, but no plans to do that now,” laughs Hammond.