The Shadow of Time 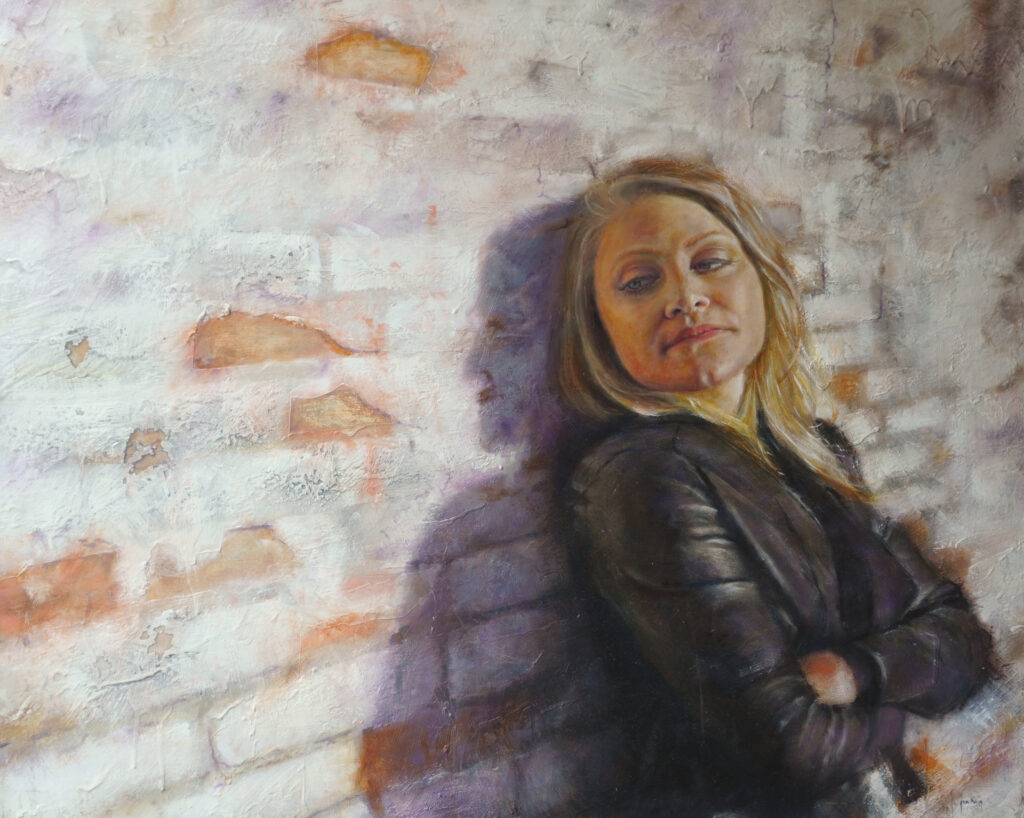 Jon Haug’s life has been a balance of doing and not doing. There were many summers spent working with his father, a skilled plasterer, that laid the groundwork for his full-time business and understanding of a trade-based skill. His love of art, honed from a young age, took a hiatus when he became a husband and father. When he started painting again at 50, the collective experiences shaped the brushstrokes.

From anniversary dinners to manipulating textures in paint with compounds more suitable for building work, it took him “not doing” for many years in order to finally do, again.

“As a teenager, I loved to draw,” he says. “I won a number of scholarships in high school and majored in art for two years. However, at the time in the early ’80s, representational art was seen by many as antiquated. I felt like I had no future in the type of art I loved. I dropped out of school and stopped art. It was painful to even try to paint or draw. I constantly had ideas come to mind, but I mostly stored them away. I always said, one day I will paint again.”

One of the portraits he did in high school foreshadowed what would later become a signature style in his body of work. Sepia-tones reminiscent of a film roll bleed off the subject; dark shades mingle with bursts of light reflecting pieces of hair, lips and cheeks. This representational style depicts tangible objects that can be seen, like someone sitting for a portrait, or of a building one might pass daily.

While all art is subjective to a degree, Haug has found a way to master his real-life subjects in an ethereal sense more akin to impressionism, using long brushstrokes and texture to shape the subject into different roles dependent on the distance of the viewer. His first attempt at reentering the art world mimicked his early high school portraiture depicting faces, emotions and a moment in time.

“When I hit 50, I walked into the Barnes & Noble at Mayfaire, picked up an art magazine and saw an article about Jeremy Lipking, an amazing representational painter. The style of art I loved was coming back into vogue,” Haug says. “I knew I had to start somewhere, so I started charcoal drawing. Next, I started painting and realized I had a lot to learn.”

Studying the work of Casey Baugh, he used the technique of placing charcoal in a bag to achieve softer lines, lending more freedom. A charcoal portrait of his daughter, Savannah, hangs in their family home. Provoking an airbrushed quality, the edges display a delicacy in movement while the subject both emerges and is centered from the use of light and dark contour.

While he employs charcoal to capture the softer moments of life, most of his oil paintings are based around the landscapes of Wilmington — the cobblestone streets of historic downtown, windswept marshes, and iconic beachside landmarks.

Using three skill sets, the mixed-media piece Shadow of Time features his niece leaning against the aged brick exterior of the Slice of Life pizzeria. The charcoal-based portrait was covered in rich oil tones. A crackle compound was then applied to the brick, achieving a realistic weathered look.

“I like to have layers of texture and color, that’s how Wilmington is,” Haug says. “The history — it has layer upon layer — there’s a beautiful complexity here.”

The Night Walk, an oil on panel piece, features Oceanic Restaurant in Wrightsville Beach (a place where he and his wife dine on their anniversary) as the center focus. A twilight atmosphere juxtaposes soft lacquered pastels, lending the feel of seagrass blowing in the wind or of white-tip waves rustling about the shore, barely visible beneath the sky.

While the subject matter is firm, the foreground is open to the viewer’s interpretation. Textures and patterns within the painting were achieved using heavy gesso alongside a grain roller that was then sanded.

“I start out with the texture, so I have something going on. When you do a wash, you pick up on that spontaneity and the richness in texture. I think our brains crave detail and excitement,” he says. “I like to work with washes and build up layers on top of the surface to get a really rich look and especially with dark colors, I start with transparent paint and build up.”

A looseness in both his landscape and portraiture enters a dreamscape of memory, like looking to the past with rose-tinted glasses. Soft subjects allow the brain to fill in the details, apparent in many of his depictions of downtown Wilmington including The Downtown Window, Morning Mooring and Evening Reflections. His portraiture puts a defined subject against breezy, flowing backgrounds of warm earth tones, like in Glowing, which received a ribbon at the 2016 Azalea Festival Art Show. He releases strict details by going over the painting with a spray bottle filled with mineral spirits.

“I heard an artist make an interesting observation once. He stated that portraiture was good for a landscape artist to do, to keep your drawing skills sharp,” he says. “It is true, you can get away with not rendering a tree exactly like it is in life, but the shapes that make up a person’s face must be captured very closely to capture a likeness. However, there is so much information in a landscape, one must edit out much of the unnecessary detail. Simplification is also important in portraiture.”

Most of his landscape work features an architectural detail here and there. Afternoon at the Salt Works started with a focus on the backlit live oak, as one would see during the golden hour. Using a panoramic panel captures the whole scene while giving various subjects space to shine. Marsh Mood utilizes composition and the rule of thirds as sprawling sound grass, tide pools, and a hazy sky draw the viewer into a lone white house off River Road along Island Bridge Way.

From painting to plaster, Haug’s skills can be viewed as old world, or as he says, antiquated. Famous works like Leonardo da Vinci’s Mona Lisa and Vincent van Gogh’s The Starry Night both fall under the category of representational art.

While Haug found himself graduating into an abstract art world, his depiction of solid subject matter interpreted through the lens of the artist will never go out of style. It just took a few decades for him to realize representational art had been there all along, beside a paintbrush waiting to be picked up again.