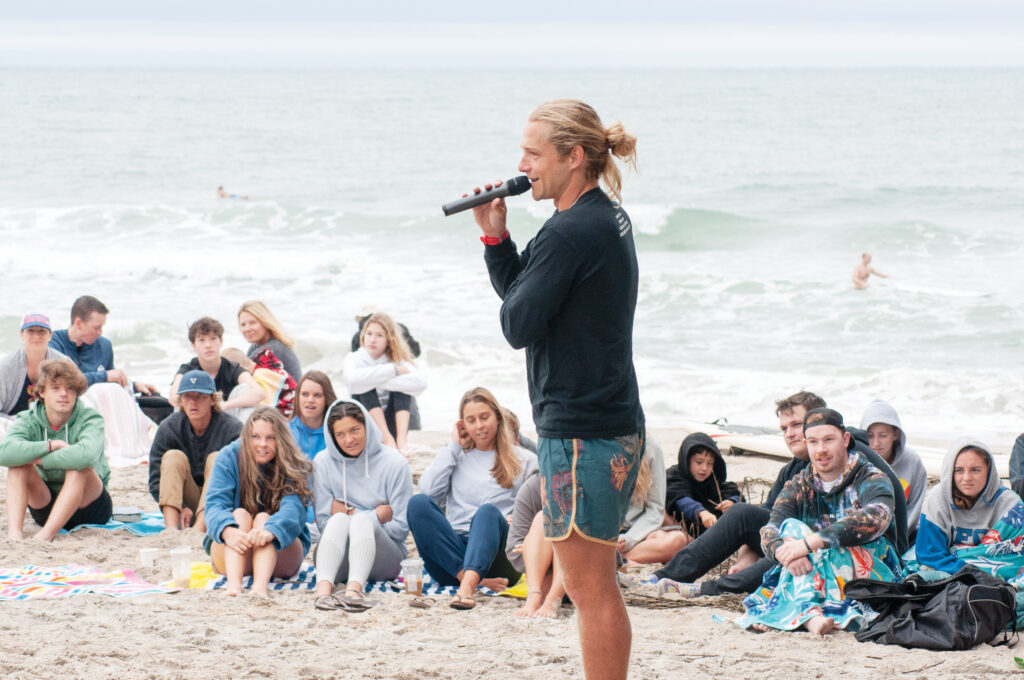 Mark Johnson (above) and Kyle Sullivan (opposite), both pastors and surfers, speak at Wrightsville Beach Surf Church, just north of Crystal Pier, on May 30. Photo by Allison Potter

The act of surfing can be a spiritual experience, a chance to be one with the nature God created. This holds true for Mark Johnson, a surfer and former Next Gen pastor at Wrightsville Beach Baptist Church.

Inspired by his draw to the ocean and his abiding love of Jesus, Johnson became convinced that his two passions would go great together. “God put it on my heart,” says Johnson, and he started asking around to see if there would be any appeal in a surf fellowship of sorts.

At about the same time, Matt Beacham, regional director of Christian Surfers and a University of North Carolina Wilmington graduate, held an interest meeting in the hopes of creating something along the same lines. The two eventually got together, and Wrightsville Beach Surf Church was born.

Run by volunteers made up of local ministry staff and Christians throughout the community, the non-denominational group meets early every Sunday morning at Crystal Pier for surfing and fellowship, with the sunrise as the backdrop.

James Connolley, Wrightsville Beach Baptist Church’s current Next Gen pastor, has been one of Surf Church’s informal leaders since its inception in the spring of 2020. Connolley explains that the original intent was to reach surfers with the gospel.

“Everywhere there’s a wave breaking on Wrightsville Beach, we want a surfer in the lineup who can be a light for Christ,” Connolley says.

The group also conducts a weekly Sunday Bible study and devotional time, which has grown well beyond surfers.

“It’s not just surfers, but people from all walks of life,” says Christian Rutherford, Youth and Family Ministries Director at Harbor United Methodist Church in Wilmington.

The word has spread that Surf Church is a welcoming, laid-back event; current weekly attendance averages around 110.

Wrightsville Beach resident Theresa Kramer loves surfing and looks forward to participating in the Surf Church fellowship afterward. She appreciates that the message is brief and often delivered by people just wanting to share their testimony. Her 21-year-old son, Gibbs Kramer, was a recent speaker.

“You just walk up in your wetsuit and you’re good to go,” says Kramer. “There’s a certain charm to that.”

Meeting outside at the height of the pandemic when many church services were canceled was also a plus.

Area businesses including Sweetwater Surf Shop and Donut Inn have stepped up to help by providing supplies or weekly coffee and doughnuts free or at discounted prices. The group met at Jerry Allen’s Sports Bar & Grill during the winter season for their “Inside Edition” Surf Church.

The message has resonated so well that a new Carolina Beach Surf Church began in May.

“It’s just a cool and easy environment to go into,” Rutherford says. “It’s real, authentic and relatable. And you don’t exactly have to pull someone by the leg when you say ‘Hey, come worship at the beach.’”