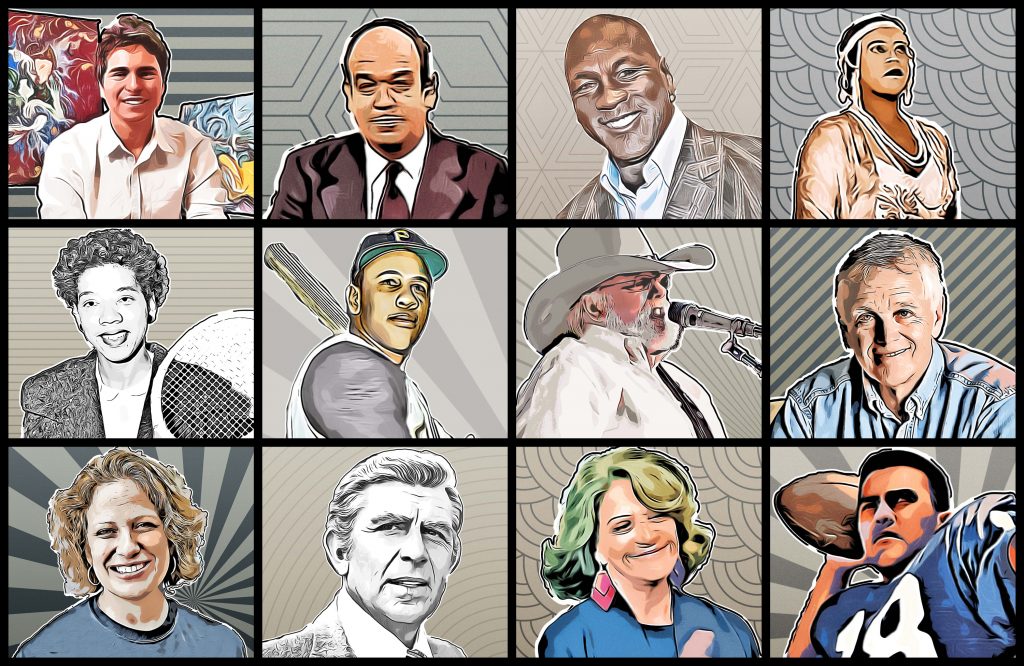 The Wilmington area has seen its share of VIPs, with stars filming movies or TV shows, politicians stumping for votes, and others of fame passing through. But the Cape Fear region doesn’t have to rely on transients to boast of its celebrity quotient. Plenty of famous people were born here, moved here, or spent a significant part of their lives in the area.

Wrightsville Beach Magazine’s top 25 features some of the famous folks who have lived or owned a home here, and whose name is – or should be – familiar to the average person on the street. The list will no doubt spark debate. Someone who is famous to the under-35ers might not be the same to the over-35ers.

Star basketball player for Laney High School, the University of North Carolina at Chapel Hill and the Chicago Bulls. He played 15 seasons in the NBA, starred in Space Jam, and is co-owner of the Charlotte Hornets. He earned numerous awards including six times NBA Finals MVP, and is considered the G.O.A.T. (greatest of all time) by many.

The 28th president of the United States lived in Wilmington from 1874 – 1882 (age 18–26) at the Presbyterian Manse when his father was the minister of the First Presbyterian Church. He was a teacher, president of Princeton, the 34th governor of New Jersey, and U.S. president from 1913-21. He won the Nobel Peace Prize in 1919 for his role as leading architect of the League of Nations after World War I.

An A-list TV and film star, gospel singer and producer best known for playing Mayberry sheriff Andy Taylor on The Andy Griffith Show for eight seasons. He lived on Figure Eight Island while filming Matlock in the area for three years. He has a star on the Hollywood Walk of Fame.

Wilver Dornell Stargell moved to Wilmington after a 21-season, Hall-of-Fame baseball career played entirely with the Pittsburgh Pirates, who retired his No. 8 jersey. Fatherly and caring, he was nicknamed “Pops” by his teammates. He was the 1979 World Series MVP. Stargell supported several Wilmington charities and a local kidney foundation bears his name.

Ray Charles Leonard, born in Wilmington in 1956, became one of the world’s best boxers. He was known as one of the Fabulous Four (along with Thomas Hearns, Roberto Durán and Marvin Hagler) boxing elite of the 1980s. He boxed from 1977-97, winning titles in five weight categories.

The Grammy Award winner and member of the Country Music Hall of Fame was born and played youth baseball in Wilmington. Daniels is best known for his No. 1 song, “The Devil Went Down to Georgia.” Daniels died on July 6, 2020.

Meadow Lemon III was born in Wilmington in 1932. He joined the Harlem Globetrotters in 1954 and delighted fans with his talent and comedic flair in more than 16,000 appearances with the touring basketball troupe. He was also an ordained minister and appeared in many commercials and TV cartoons.

Brinkley was a print and television journalist whose 50-plus year career began at the Wilmington Morning Star while a student at New Hanover High School. He anchored the NBC Nightly News for many years before moving to ABC and hosting This Week with David Brinkley. He won 10 Emmys and was awarded the Presidential Medal of Freedom.

Born in Wilmington, Christian Adolph Jurgensen III was an all-around athlete, performing well in a number of sports and playing multiple positions on his football teams. But he excelled at quarterback, starring at New Hanover High, Duke University, and in the NFL from 1957-74 with the Philadelphia Eagles and Washington Redskins. He led the league in passing three times and was inducted into the Pro Football Hall of Fame in 1983.

Born in 1927 in South Carolina, where her parents were sharecroppers, Gibson moved to Harlem, spent time in a children’s shelter, then moved to Wilmington, where she attended Williston Industrial High School and lived with sponsor Dr. Hubert Eaton. Gibson smashed color barriers, becoming the first black woman to capture a Grand Slam title when she won the French Championships in 1956. She went on to win five Grand Slam singles titles. In 1964 she became the first black woman to compete on the Ladies Professional Golf Association tour.

The famous print and TV journalist was born in Wilmington in 1934 and spent the first 11 years of his life in the Port City before the family moved to Charlotte. He was the first anchor of CBS News Sunday Morning, but is most famous for traveling the backroads of America in a camper to meet the people for his On the Road segments. Kuralt is buried in Old Chapel Hill Cemetery.

An Italian-American film producer who is credited with creating “Wilmywood.” He lived in Wrightsville Beach after opening a film and television studio, De Laurentiis Entertainment Group, in Wilmington in the 1980s. He produced over 500 films including Serpico, Death Wish, Conan the Barbarian, Hannibal, Red Dragon, Assassins, The Dead Zone, Silver Bullet, and participated in Halloween II and III.

Born in Wilmington and played football for New Hanover High. Gabriel is noted for being the first NFL quarterback of Filipino-American descent after becoming the No. 2 pick in the 1962 draft. He played 11 seasons for the Los Angeles Rams and five seasons for the Philadelphia Eagles. At NC State, he passed for 20 touchdowns and ran for 15.

An actor whose film career started in the 1950s and included roles in Giant and Rebel Without a Cause. He lived in Wilmington for several years after filming Blue Velvet at Screen Gems Studios. He directed and starred in the film Easy Rider with Peter Fonda in 1969. Other credits: Hoosiers and Speed.

A comedian, writer and actor, Jones moved to Wilmington after filming the television series Sleepy Hollow. He is known for the comedy series MadTV and his quirky 7 Up commercials. He had his own late-night talk show, the Orlando Jones Show, for a season, wrote for the TV shows A Different World and Roc, and co-produced The Sinbad Show.

The UNC basketball coach has a home at Wrightsville Beach. He is one of the most successful coaches ever, taking the Kansas Jayhawks to the Final Four three times and winning three NCAA championships with the Tar Heels. He has won numerous coach of the year awards and is inducted in the Basketball Hall of Fame.

Linda is a singer and actress best known for her title role as Alice, a TV sitcom that aired from 1976-85. She began acting at age 5 and appeared in several Broadway shows throughout her career. She and husband Steve Backus were very involved in Wilmington theater, founding the Red Barn Theater, and community projects from about 1996 to 2012, when they returned to New York. She has won six Tony Awards and three Golden Globes.

Christopher Trotman Nixon was a standout athlete at New Hanover High in both baseball and football. He surpassed the school passing records of both Gabriel and Jurgensen. Nixon had a scholarship to play both sports at NC State, but instead signed with the Boston Red Sox. He helped Boston break “The Curse of the Bambino” by winning the 2004 World Series. He and his family still live in Wilmington, where he contributes to football coverage on local TV.

Born in Wilmington in 1925, jazz bassist Heath grew up in Philadelphia where he learned to play several instruments.  He worked with jazz greats Miles Davis, Charlie “Bird” Parker, Thelonious Monk and Dizzy Gillespie, and was a member of the Modern Jazz Quartet.

Born in the U.S. to Ukrainian parents, he is a self-taught painting prodigy who attended Wrightsville Beach Elementary. He is said to have begun drawing at 17 months old. The press compares his abstract work to Picasso and Marc Chagall. He is a Harvard grad, a philanthropist, and has had his work commissioned by Michael Jordan, Colin Powell, Hillary Clinton and Celine Dion.

Born on Church Street in 1898 as Katherine Lee Yarborough, she hurdled racial barriers to become the first black female opera singer to perform a title role with a formerly all-white company. Opera Wilmington celebrates this pioneer with the annual Caterina Jarboro Memorial Recital.

Algernon Crumpler lettered in football and track at New Hanover High, winning state titles in discus and shot put. He was an All-ACC tight end at UNC, and taken by Atlanta in the second round of the 2001 NFL draft. He went on to play in the NFL for 10 seasons with the Falcons, Titans and Patriots. Crumpler now works as an analyst for the ACC Network.

Known for serving as Secretary of Education under Ronald Reagan, Director of the Office of National Drug Control Policy under George H.W. Bush, and for editing the anthology “The Book of Virtues.” The cable news commentator and former syndicated radio host has a home on Bald Head Island.

He is an author and creative writing professor at the University of North Carolina Wilmington. He was inducted into the North Carolina Literary Hall of Fame in 2016. Three of his 10 novels have been adapted to film, with Edgerton in a cameo role in Killer Diller.

Winner of 2017 CNN’s Hero of the Year Award for her advocacy of physically and mentally challenged people. She is owner of Bitty and Beau’s, a local coffee shop that employs disabled people. Her two youngest children, Bitty and Beau, have Down syndrome and are the inspiration for the business.

& others… including Anna McNeill Whistler

Time and space do not allow touting of all the noteworthy people to have called this area home. If your interest is piqued, be sure to learn more about the following people who brought a bit of themselves to the Wilmington area.