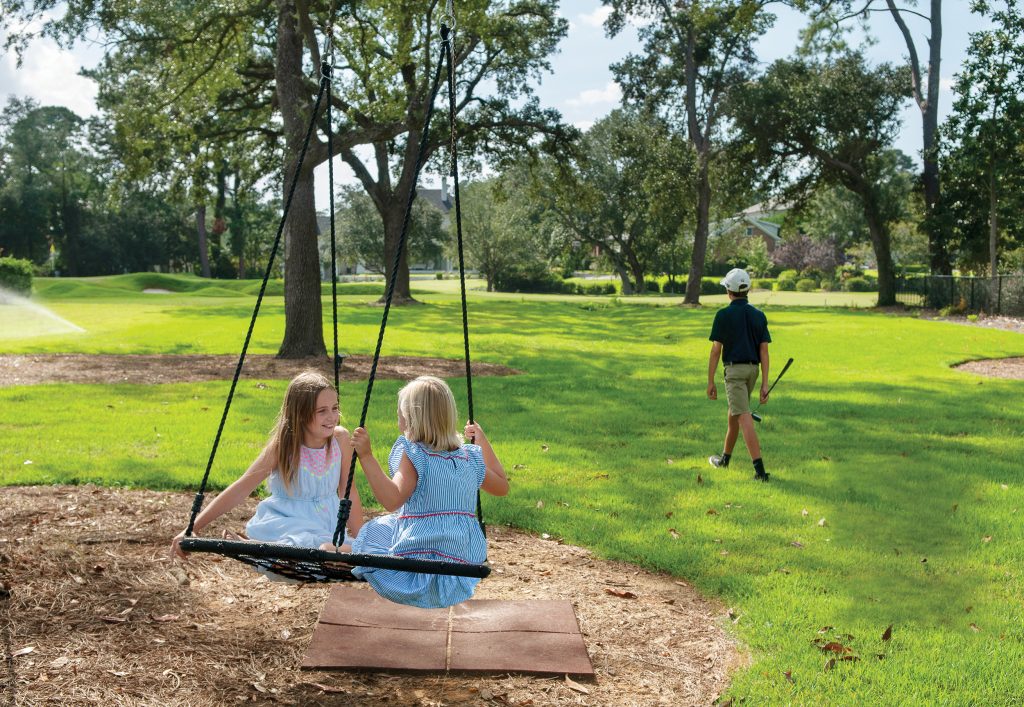 The Carroll girls, Harris and Drew, enjoy their time outdoors on a saucer tree swing in the backyard of their new home while their brother, Burton, heads out for putting practice. Photo by Allison Potter.

Rediscovering the simple pleasure of enjoying nature is one of those undeniable silver linings during this time when so many are feeling isolated. For Liz and Robby Carroll, having the opportunity and space for their three children to play outdoors was essential when buying a new home.

Downsizing was not the intention when the Carroll family began to seek new real estate. But when Robby stumbled upon a one-story, single-family home in Wilmington with the possibility for a vast outdoor space overlooking the 10th hole of Cape Fear Country Club golf course, they immediately saw the potential.

At first glance, it was the epitome of a fixer upper. The home was built in 1950 and had been abandoned since Hurricane Florence hit in 2018. The blue tarp on the roof and several desperately needed repairs were deterrents for average home buyers.

But the Carrolls are no average home buyers. Where others saw obstacles, they saw opportunities.

“My husband had already walked through once and wanted to take me to see the house,” says Liz Carroll, owner and lead designer of Liz Carroll Interiors. “I told him that I would walk through and I could tell him in two minutes if I could fix it or not.”

She walked in and immediately saw the charm and capability the house had to offer.

The couple decided to buy the home, unsure whether they were going to keep or rent it. But as they made the renovations they wanted, they decided to enjoy it themselves.

The importance of a large outdoor space was high on their list, so the Carroll family quickly learned to love having a one-story home.

“My whole family has loved it,” Liz says. “It’s just so much easier with three kids, especially now that we are all spending extra time at home due to the pandemic.”

The exterior of the ranch-style home needed repairs and a facelift to achieve its full potential.

The brick received a fresh coat of white paint and about half of the windows were replaced. Shrubberies line the gravel driveway, and the rest of the grounds were tastefully landscaped to accent the exterior.

Originally, a parallel lot stretched from the Carrolls’ yard to their neighbor’s yard. Shortly after they bought their house, an opportunity arose to jointly purchase the lot.

“Both of our yards now open up all the way to the golf course and it keeps both homes from having a house built in our backyards,” Liz says. “It’s a beautiful view for both families.”

Robby and Liz put in a trampoline, a slackline, a tree swing, and other fun activities for their children and their friends to enjoy. Views are enjoyed through large floor-to-ceiling windows, and French doors open onto an updated deck where the Carrolls can watch their children play in the yard.

This golf course getaway with a big yard for the kids doubles as a serene, relaxing environment. The interior is a place for Robby and Liz to unwind and recharge at the end of a long day.

The Carrolls began the interior renovation by gutting the house down to its studs. Every bathroom was redone, walls were removed, and the exterior was revamped.

One aspect that was significantly important was keeping the period charm of the 1950s home.

“We kept the original floors,” Liz says. “We found that when we sanded the hardwoods down they were actually really pretty. And we used a clear coat instead of a stain.”

Liz was originally outnumbered on the decision to keep the floors light but eventually her husband and the contractors saw her vision.

A home should be an oasis for families in the middle of a hectic world. That was the guiding principle Liz worked under.

“There wasn’t necessarily a color palette I was after when designing the house, it was more of a feeling I was after,” she reflects. “I wanted it to feel really relaxed, calm and open.”

The Carrolls wanted to surround themselves with objects they loved and colors that made them feel blissfully at peace. To achieve this harmonious aesthetic, Liz used a variety of neutral colors. She also used layers of textures and textiles to ground the space and give it a sense of depth and complexity. She opted for minimalist furniture with clean lines and open legs.

Living room furnishings include beautiful woven bar stools, geometric coffee tables and nubby ivory couch cushions. Every item seems to have a weightless quality. The space is filled with natural light and green plants to keep the calming feeling constant throughout.

“With three kids and two businesses, I wanted it to be easy,” Liz says. “When I come home, it feels good to have a space that is easy to maintain.”

Liz used an array of illuminating lamps, sconces and light fixtures to provide a modern feel. This room also showcases a scenic wallpaper on grass cloth made by Liz’s own fabric and wallpaper line, House of Harris.

In the spacious and light-filled kitchen, charcoal base cabinets are topped with a white quartz countertop. Walls covered in white shiplap keep this space light and airy, offsetting the dark cabinetry. Sealing the deal on the calming vibe are the accents of gold hardware and sconces.

She also explains the importance of planning ahead with regard to lighting: “A variety of lighting makes a space interesting and beautiful, and planning it while the Sheetrock is down is better than tearing into the wall after the fact.”

One of Liz’s favorite touches is the caned cabinet doors in the laundry room and pantry.

“I have never done that before and I wanted to try it out on myself before I tried it with a client,” she says. “I am in love with how it turned out.”

With an unplanned downsize came a need for smart space-saving ideas. Liz included wall-mounted desks in the kids’ rooms and hidden storage in the laundry room.

“It is smaller than what we had before but it was honestly refreshing to purge the things we didn’t use anymore,” she says.

The home reflects Liz’s philosophy that a beautifully decorated interior should not only be functional but should evoke a mood or a feeling that shows off the personality of the family that lives there.

“If you love something you can make it work, and that’s part of what makes a person’s home uniquely theirs — a home filled with special pieces they love,” she says.