A lighthouse stands tall in the darkness, bringing light to those who need it. Perhaps that is what Lighthouse Films has done for the Richter Building. 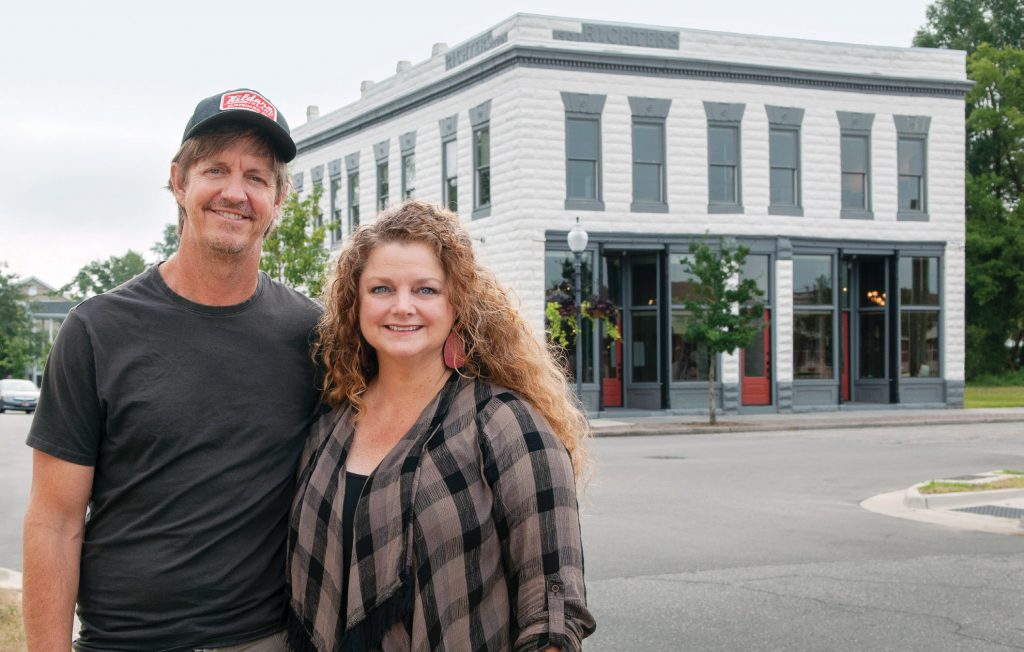 Brad and Andrea Walker, owners of Lighthouse Films, renovated the Richter Building, circa 1903, located on North Fourth and Harnett streets in Wilmington’s Brooklyn Arts District, for their offices. Photo by Allison Potter.

As the helicopter rounded the Statue of Liberty, filmmaker Brad Walker braced himself for the perfect shot. His door had been removed so he could strap his camera to the hinge with a bungee cord. From behind the lens, Brad felt something hitting his leg.

“We had this beautiful sunset as the backdrop,” Brad says. “I yelled to the pilot, ‘Bank!’ As my side of the helicopter leaned over the water, I finally looked down and saw it was my seatbelt that was hitting my leg!”

Brad and Andrea Walker, married owners of Lighthouse Films, tell the story from the second floor of their newly renovated offices. It was just one of many epic adventures over the years that have earned the production company international acclaim and quite the following. Clients include JPMorgan Chase, HGTV, Ford, Michelin and Chrysler, to name a few, plus a lengthy list of films and TV shows. More recently, they worked with Chase Stokes and Madelyn Cline, co-stars of the Netflix show, Outer Banks, for a music video released in September.

“Once you have had the opportunity to work in this hyper-creative state,” Andrea says about Brad, “you cannot imagine telling stories in any other way. He steps into a room and immediately notices the light, the shadows, the emotion, the story.”

The building, constructed in 1903, is a story in itself, one the Walkers thought was worth unfolding. It is the tale of a diamond in the rough, a project that took nearly two years to complete and culminated with a 2020 Preservation Award from the Historic Wilmington Foundation in the Rehabilitation category.

“I went to their building right before they opened and was completely blown away by what they had done. Such a comfortable, cool vibe,” says filmmaker Andrew Martin, who has worked with Brad on several commercial shoots for IBM.

“Walking up the stairs is like entering an old study, kept in the attic for creative discovery,” editor Zach Davenport says. “Even the tables and some of the desks are used with reclaimed wood from the property. The whole place invites you to dream.”

On this day in early February 2020, a crew from CW’s Lost Boys pilot is testing lenses in the building’s downstairs rental suite.

The lens rental part of the business is a unique niche that began with Brad collecting film equipment in college.

“I wanted to have all of the finest gear available to shoot with at any time without having to call up rental companies only to find out they didn’t have a particular camera or a particular lens,” he says.

Today, Lighthouse offers multiple ARRI Alexa cameras, a Sony Venice, and the most advanced lens packages in the industry.

“I did one of the largest lens tests of my career, 10 different sets of lenses,” Spera says. “Lighthouse brought them in from all over the world. It was really amazing.”

Although based in Wilmington, the Walkers got their start filming promotional videos for summer camps in Maine. They ran everything from the basement of their home for more than a decade.

“We got to work in our PJs and invite co-workers to eat dinner with our family,” Andrea says. “But when it became difficult to fit five cars in our driveway each day, we knew it was time to move out of the house.”

They moved their production company into a rented space inside a coffee shop in 2014.

“There was a building he wanted us to see,” Andrea says.

It was the venerable Richter Building on North Fourth.

We have always dreamed of having an office downtown, but our company depends on easy deliveries, loading and unloading of equipment, so we had almost given up on the dream,” Andrea says.

The building had been on the market for several years. Despite being in downtown’s trendy up-and-coming Brooklyn Arts District, it remained neglected and passed over. Potential buyers only saw a project too big to tackle.

The Walkers saw close to 6,000 square feet and an adjacent lot, perfect for loading and unloading film equipment. They said, “We’ll take it.”

“I immediately fell in love with the open space and the natural light it provided,” Brad says.

The renovation began in the fall of 2018. Andrea met with architects, contractors and historic preservation offices. The Walkers’ kids, Alex and Annie, pitched in after school and on the weekends.

One day, as the Walkers were smashing in some Sheetrock, a woman by the name of Iris Baker drove up.

“I said, ‘Ooh, someone has bought the building! Let me pull over and go visit,’” Iris says.

Iris Baker is the great, great granddaughter of Charles Richter, the man who built the structure back in 1903. Richter was a businessman who emigrated from Germany. He ran a grocery store and soda fountain on the first floor and had an apartment up top.

Iris had photos that showed the history of the building.

“The pictures show both sides of the downstairs; there are people in a number of the pictures,” Iris says.

When she showed the photos to the new owners, the Walkers gained a new appreciation for the building.

“I don’t think I realized how big of a responsibility we had taken on until I looked at the photos of what she once looked like,” Andrea says. “She has lived through the depression, the Civil Rights movement, so many hurricanes, and now the rebirth of the Brooklyn Arts District.”

New Beginnings for a Historic Space

Using the pictures, the Walkers were able to identify original features and bring them back to life.

“We discovered that the storefront is standing on cast iron,” Andrea says.

Cast iron on buildings, she learned, became obsolete when the Atlantic Coast Line Railroad left in 1955.

“We emphasized this feature by painting the cast iron black, and love to show our visitors the fun party trick that you can stick magnets to our cast iron storefront,” Andrea says.

A new story was revealed each day as walls and ceilings were torn down.

“We found vertical wood-slat walls with shelf lines that tell the story of when the Hall’s Pharmacy was once housed in the first-floor south unit,” Andrea says. “There are mathematical accounting scripts on the walls. We found beautiful bead board and hidden doors that go nowhere.”

A floor restoration specialist was hired to scale the floors and stair treads instead of sanding them.

“Sanding would have been the easy route,” Andrea says. “Instead they worked into the wee hours of the night, on their hands and knees, scaling the floors. That floor was Brad’s baby.”

Scaling restored the wood without removing its history. The Walkers made sure historic imperfections were left in place.

“Our family spent most of our time removing the nails from the ceiling boards,” Andrea says. “Our contractor then had carpenters put the ceiling wood back up on the ceiling. It is my favorite feature of the building.”

Reconstructing the balcony on the side of the building was the only project that remained when Lighthouse Films moved into its new offices in late 2019. The Walkers used Iris’s photos to prove to the historic preservation offices that it did once exist, gaining permission to build it back.

The photos from Iris have been reproduced and are framed and hanging in the hallways for visitors to see.

Iris, who had driven by the building for years, was one of the first people invited in to see the renovation.

“I love it,” she says. “I really appreciate the film industry, that’s why I really love that they have the building.”

“It feels good to be taking care of a building that has seen Wilmington go through so much,” Andrea says. “What would she say if she could speak? What wisdom could she give us all? My hope is that she would say thank you, that she feels beautiful and strong and is happy to welcome all that walk through her doors to her family, her new Lighthouse family.”

James McQueen cited the following information in his application for a plaque from the Historic Wilmington Foundation in 1988. The documents referenced include property deeds, newspaper articles,