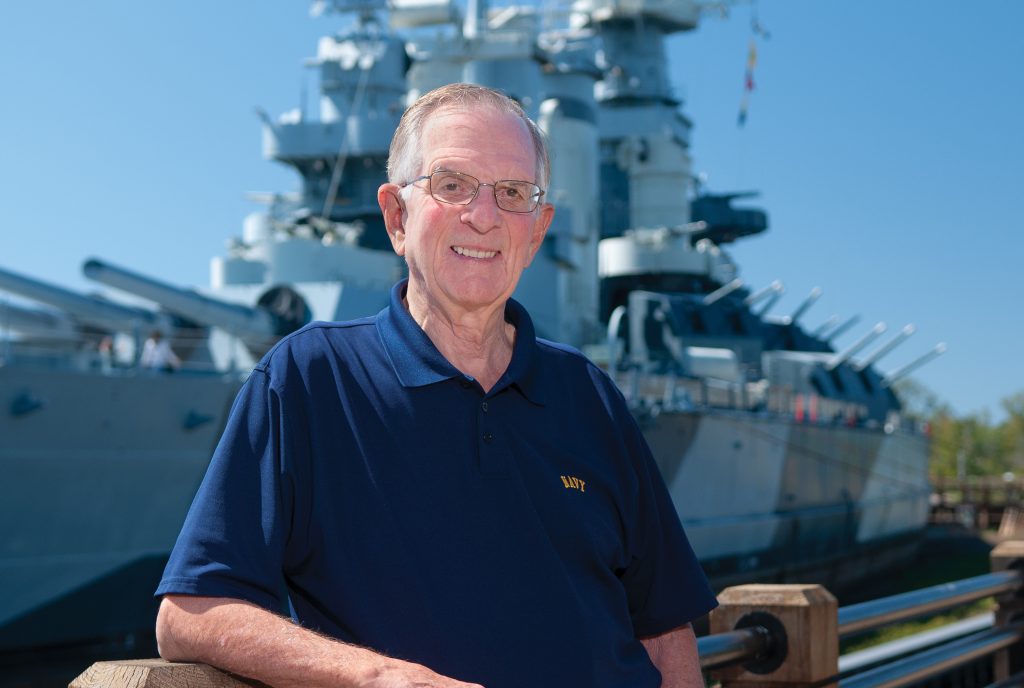 Wilbur Jones sat among the politicians and glitterati gathered at the Battleship North Carolina on Sept. 2, brought together for a historic occasion. The town — his hometown — was being recognized as America’s first World War II Heritage City.

The keynote speaker called out a couple of dignitaries by name — Rep. David Rouzer and U.S. Sen. Thom Tillis — and asked them to stand, acknowledging their role in the distinction. Then Jones heard his name.

“I want to thank Wilbur,” the speaker said.

Jones served in the U.S. Navy for 28 years. The speaker was Donald Trump, the president of the United States. He responded instinctively.

“My first reaction was to stand immediately. He had asked Tillis and Rouzer to stand,” Jones says. “You have to remember, I’m a retired Navy man. And he’s the Commander in Chief. So I popped a salute. And he returned my salute.”

A lot of thoughts flew through his mind during the brief moment. Pride in being recognized, sure. Pride in the city, definitely. A touch of disbelief that a dream — which often seemed like an impossible dream — was finally realized. And maybe just a little relief that the process was over at last.

“My hopes and dreams came true,” he says. “I consider that my proudest day of honor.  I’m just as proud as I can be for my hometown, where I was born and raised. I’m so happy for Wilmington, and I’m so happy for North Carolina. We’ve created a national program. As the president said, at the same time so many people want to tear down monuments, Wilmington is building one up.”

This moment, this day, this recognition happened because Jones conceived the idea nearly 13 years ago.

Jones is a military historian, specializing in World War II. He has authored 18 books, including two on wartime Wilmington.

“I was born and raised in Wilmington,” he says. “I was raised as a boy during World War II. That’s all we knew growing up. We played war; we followed the war news. I’ve always been interested in history and our armed forces.”

That love of history, specifically the history of his hometown during the Second World War, still burned brightly when he returned home after a four-decade career spent in service to his country.

“When I moved back to Wilmington, I got interested in preserving history,” he says.

In 2000, he founded the WWII Wilmington Home Front Heritage Coalition. The nonprofit’s mission was to preserve and promote the area’s involvement in and contribution to the war.

“Wilmington had a story to tell, but it was about to die out,” Jones says. “People would have forgotten that Charles Murray and Billy Halyburton from New Hanover High received the Medal of Honor. It would have been forgotten.”

The story had many chapters.

Every branch of the armed forces was present in the area. Camp Davis in Holly Ridge and Fort Fisher were Army training bases; anti-submarine warfare (ASW) Navy vessels operated out of Southport and along the Cape Fear River; ASW planes flew out of Bluethenthal Army Air Base, which was later a training field for P-47 fighters; the Marine Corps operated out of Camp Lejeune in Jacksonville and the Air Station at Cherry Point; and Coast Guard patrol boats were stationed at Wrightsville Beach, Wilmington and Southport.

Wilmington was also home to the North Carolina Shipbuilding Company, which built 243 Liberty and C-2 hulls, three prisoner-of-war camps, and was strategically important as a port city and headquarters of the Atlantic Coast Railroad.

German U-boats patrolled off the coast, forcing Wrightsville Beach and Wilmington residents to adhere to black-out restrictions. Some believe a German submarine fired on the Ethyl-Dow chemical plant at Kure Beach in July 1943, possibly the only German attack on the U.S. mainland.

Civilian industries converted to a war footing. The Block Shirt Factory in Wilmington made uniforms for the military. Fertilizer plants, farms, dairies, and other small businesses contributed to defense industries.

Much of the history was preserved in a museum established at the Hannah Block USO Building in downtown Wilmington, which itself was an important part of the war effort. From 1941 to 1945, about 35,000 uniformed personnel a week came to town for dancing, recreation and entertainment.

As Jones considered the area’s vast involvement, the germ of an idea began to grow. Wilmington should be recognized for its World War II legacy.

“I came up with the idea in late 2007,” he says. “When 2008 began, I began contacting the city council and county commissioners about proclaiming Wilmington as a heritage city.”

It was a good start, but Jones wanted national recognition. To accomplish that, he had to wade into the murky waters of the legislative process.

“It was a classic case study of how to get things done through Congress,” Jones says. “It was an amazing cooperative effort from volunteers, elected officials, government staff, the media, and our congressional delegation.”

Jones, a former assistant to Republican President Gerald Ford, began by working with U.S. Rep. Mike McIntyre, a Democrat. They established the criteria — what did your city do to support the war effort, and what are your efforts to preserve that history — and created the first draft of what would become the legislation.

In the beginning Jones also worked with Gov. Bev Perdue, Sen. Kay Hagan and N.C. Rep. Susi Hamilton, all Democrats, and Sen. Richard Burr, a Republican. Burr helped for several years, then turned it over to Tillis, a Republican. Rouzer, a Republican, took the torch when he was elected in 2014 following McIntyre’s retirement.

The effort started when George W. Bush was president, continued during Barack Obama’s tenure, and finally happened during the Trump administration.

“It was totally bipartisan,” Jones says. “It was never intended to be political or partisan. I didn’t give a hoot or holler who was in the White House. I just wanted the president to come to Wilmington and sign the declaration on the Battleship North Carolina.”

It took so long because it had never been done. When Jones first approached McIntyre with the idea, he was hoping for something as simple as a congressional declaration. He learned it had to be done through the legislative process, which entailed creating the criteria for a municipality to seek recognition as a WWII Heritage City.

“This entire project has taken an enormous amount of patience,” he says. “I’m a volunteer. I never had a position of authority. I had no pull, no leverage. In my later years — I’m now 86 — I’ve acquired at least the ability to realize when one should keep one’s mouth shut and look for the right opportunity. I had to be extremely diplomatic and patient.”

The bill establishing the World War II Heritage City program, to be administered by the Secretary of the Interior through the National Park Service, passed in Feb. 2019, and was signed by Trump the following month. Wilmington applied to be the first city recognized. It easily met and exceeded the criteria — in no small part because Jones and the North Carolina congressional delegation established the criteria.

“It was our idea,” Jones said. “We took the lead, we did all the work. There would be no national heritage program had it not been for Wilmington.”

“My lifelong credo has been never give up,” he says. “That’s what guided me. Along with constant prayers. The Lord got so tired of me with all these prayers.”

Secretary of the Interior David Bernhardt attended the ceremony, and presented Jones, Rouzer, Tillis and Wilmington Mayor Bill Saffo with copies of the proclamation.

“I went into orbit, and frankly I haven’t come down,” Jones says. “I intend to have a duplicate copy made of mine and put in the Hannah Block USO, because that’s the hub of our World War II activities.”

The ceremony at the battleship was the culmination of a quest that took more than a dozen years. But it didn’t mark the end of Jones’s work.

“I’m really relieved that it’s over,” he says. “I’ve moved on to other projects.”

They include the publication of his memoir, which was scheduled for the spring but was delayed by the pandemic. And naturally, the World War II historian and proud Wilmingtonian isn’t finished promoting his hometown’s role in the conflict.

“Now that we have the designation, we need to have the right players, the Chamber of Commerce, the Convention and Visitors’ Bureau, to tell the world that we’re here. The world will be interested. There’s a huge global interest in World War II history. We need now to blow our horn.”