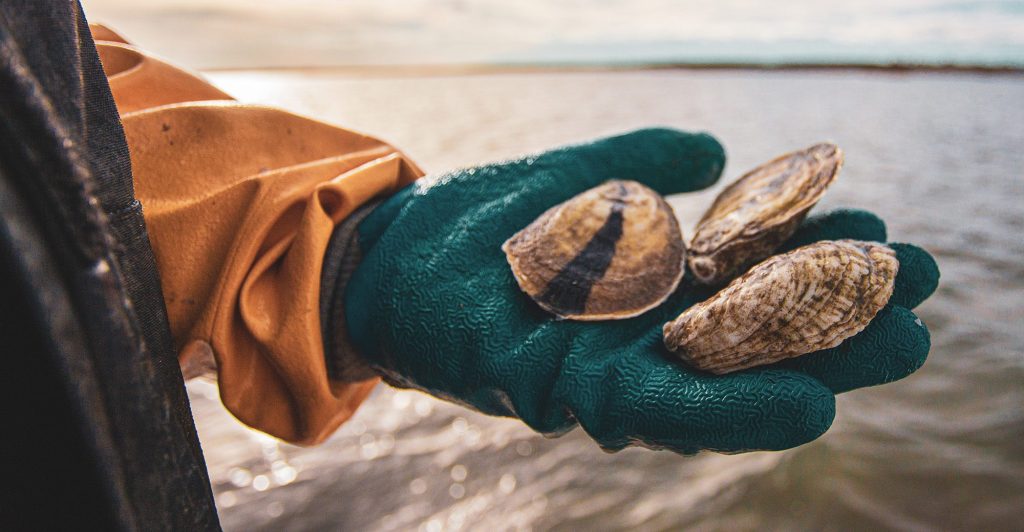 The North Carolina Oyster Trail is a grassroots effort to support oyster tourism throughout the coastal regions of the state. Initially focused on the Outer Banks when it was launched two years ago, eight companies in the Wilmington to Topsail area now are among the 30 participants.

The idea is to drive visitors to area shellfish farms, restaurants, markets, and educational centers. Oyster-related businesses must meet a list of criteria to become a member.

“The Oyster Trail is putting a lot of bigger farms on the site,” says Evan Gadow of Three Little Spats Oyster Company, an oyster farm operating on a 60-plus acre lease near Topsail off Permuda Island. “You can book and go on tours, buy oysters up and down the coast. The hope is it will be kind of like how Napa Valley has their wine tours; we have an oyster tour.”

The group mirrors the Virginia Oyster Trail, which began in 2015. The North Carolina version, administered by the state Coastal Federation, Sea Grant and the Shellfish Growers Association, is slowly rolling out the program, and there have been a few snags in the net.

New Hanover County is in a bit of a hard spot. While wanting to encourage blue economy, sustainable fishing, and a healthy ocean environment, new leases have been halted by a shellfish farm moratorium.

“Getting a lease is a long process. Trying to find an area that is not around a lot of buildings, and development, it is hard to do,” says Mandy Uticone, co-owner of Carolina Beach Oyster Company. “New Hanover County is so developed, there’s a lot of user conflict. That’s why they have stopped right now.”

Uticone already had her company name with plans of farming near Carolina Beach. Instead, she subleases a small plot in Topsail.

Other oyster farmers echo the difficulty of getting leases. One described the lengthy process as a nightmare that lasted three years. Another pointed out the lack of help or incentives from the state, whereas Virginia subsidizes aquafarms.

“I can understand it. It is everybody’s water,” oyster farmer Conor MacNair says. “When you put something out there in the ocean, it should be for all our good. We did start off trying to farm in New Hanover, but we had a lot of pushback. So, we found ourselves up here in Pender County. We love it here. The best part of Pender is it feels like the oyster farms were here first and then the houses came.”

New Hanover County is currently home to eight shellfish farms. The temporary ban, which came out of a state law in July 2019, is from the Wrightsville Beach bridge to an area around Snow’s Cut. It is set to expire July 1, 2021.

“In 2011, we had a total of two applications for shellfish leases, in 2019 we had 106. That is a 5200 percent increase,” says Jacob Boyd, Section Chief of Habitat and Enhancement for the North Carolina Division of Marine Fisheries. “We really saw that huge jump around 2015 and 2016. And that is also when we saw a large shift in the type of lease requests. You have cages on the bottom, or cultch [material laid on oyster grounds to furnish points of attachment], that can’t be seen much except for the corner markers. Whereas, with water columns, using the floating bags or cages, you can see all those floating on the water.”

Boyd says that population growth in southern regions and the narrowness of some water bodies brought about a lot of NIMBY issues.

One tool his department launched to help all stakeholders is a GIS map that shows existing shellfish leases and any applications throughout the state.

MacNair, who sells oysters from his N. SEA. Company farm seven days a week, is working on his oyster trail goal.

“My uncle got me into oyster farming,” MacNair says. “He started a farm in Tomales Bay, north of San Francisco, called Hog Island Oyster Company. It is something of an oyster mecca. They have a really awesome retail site with a picnic area. You can sit right there on the water and see the crew bringing in oysters in the background, you can shuck your own or get some on the half shell. That’s what I’m trying to do for the tourist aspect.”

MacNair, a University of North Carolina Wilmington graduate, farms a unique Australian technique to produce his branded oysters, the Dukes of Topsail Sound and the green-gilled Divine Pine. The green-gills feature a bright teal gill, which is a product of the algae consumed by the oysters. It’s fairly rare and can be quite sought after.

Restaurants and seafood markets must offer at least one type of North Carolina oyster year-round to be featured on the Oyster Trail website.

“All our oysters are local. In fact, they are either Stump Sound, Topsail Sound, Masonboro Sound or Sneads Ferry,” says Tidewater Oyster Bar chef Chris Vergili.

“We have been filling up and having a wait list on Friday and Saturday night. It’s a great problem to have in these times,” Vergili says.

The most popular item is oysters on the half shell. But if they want a sampling, diners can taste oysters from all four local farm areas.

“We’ve had great support from the local community, oyster farmers, and we use a lot of local farm produce too,” he says. “Supporting local business is very important to us.”

Another marker on the NC Oyster Trail is the Wrightsville Beach Brewery, owned by Wilmington native Jud Watkins.

“We have four different locals we usually get oysters from, two that harvest wild oysters and two that are farmers,” general manager Keith Sincavage says. “We can give customers descriptive details, if they want something salt forward, or something more moderately salty, we will try to help pair their taste with the beverages they like.”