A historic home lures a couple to downtown Wilmington 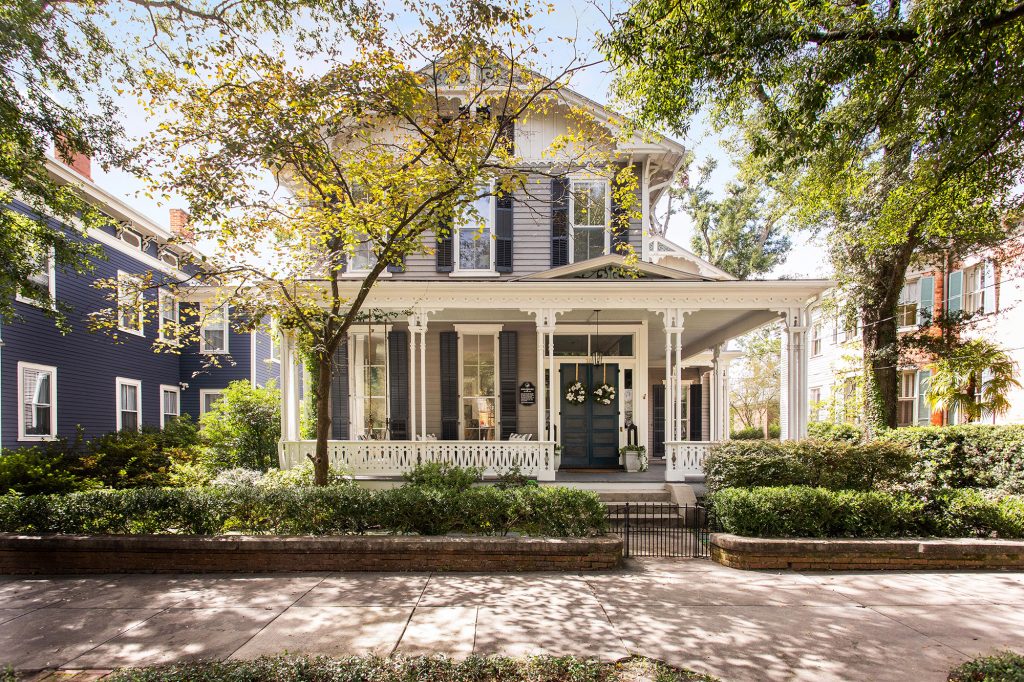 What began as an Internet search for a new home evolved into a tour of the Southeast coastal region. Pensacola, Florida, and Savannah, Georgia, were a couple of the stops during Megan and Chad’s journey.

“Wilmington was where we landed last,” Megan says.

Driving east across the Cape Fear River Bridge, the view from the rise took her breath away. Her eyes were riveted to the amazingly adorable riverside cityscape — the view that endears many newcomers to the charming city.

Their GPS led them to 318 S. 3rd Street where they met listing agent Jennifer Ford of RE/MAX.

“We definitely felt something as we drove up to the house,” Megan recounts. “The rest is history.”

They had arrived at the 1883 Burruss-Poisson house in the heart of the historic downtown area. By December 2017, it was all theirs.

“Is there anything we didn’t fall in love with?” Megan asks.

The authentic and exquisitely detailed Queen Anne architecture, 12-foot ceilings with full length windows, plus the 3,500-square foot interior were not typical of other Victorian homes they had toured.

“This felt like the most modern style inside a really historic home. The bones are phenomenal,” Megan says.

Claiming a formal sitting room for her home office, she adds: “I’m really big on sunshine and warmth.”

At first, she was somewhat apprehensive about 3rd Street’s noisy rush hour traffic patterns. But no more. Now the front porch — furnished with an old-timey bed swing, wicker armchairs and porcelain garden tables — is enlivened by the couple’s presence.

“It’s very therapeutic to see the world go by,” she says.

The porch is completed by the rear sunroom, also furnished with wicker and woven throw rugs. The fenced backyard of the home nestled into the neighborhood between Ann and Nun streets is paved in brick surrounding a koi pond. The koi, Megan says, were “rescued” during Hurricane Florence when the couple got a real taste of “warmer weather” courtesy of the Cape Fear region.

“We met a lot of transplants like ourselves,” Chad says. “The people here have been a real highlight.”

Megan agrees. “We made faster friends here than we did in our old neighborhood in Denver.”

Shortly after they settled in, that warm welcome included an invitation from the Historic Wilmington Foundation to open their doors to thousands of visitors during the 2019 Azalea Festival Home Tour.

Before opening their doors to total strangers, the couple wished to style their new old house. Working remotely, the tech industry leaders began the search for someone to bring them down off their cloud and interpret their aesthetic.

Megan was the one to land on the website showcasing the work of Big Sky Design.

“The website spoke to me right away and was really well done. That made me feel comfortable,” she says.

She submitted an online query and Big Sky Design’s lead residential designer, Jo Howell, replied. On the first meeting, Megan and Chad knew Jo was a perfect fit for them.

“Jo really got to know us,” Megan says. “We are the last people to spend time picking out a design or fabric. We relied on her — never more than three choices — she really just adapted to our personalities.”

The clock was ticking when the project began.“It was going to be a big push to have the interior ready for tour goers; yet, we could do it,” Jo says.

Jo envisioned a palette inspired by the feathers of peacocks, the exotic bird species that dominated popular culture during the Victorian era. Not afraid of color, she married the iridescence of pastel teal with lavender in a living area. She honored interior architectural details with fresh coats of glossy paint tints.

Chris Clow of Pinnacle Finishes followed her lead by refurbishing coal burning fireboxes with coats of black lacquer. Each of the fireboxes was reinterpreted — stocked with white birch wood in the library, stacks of gold leaf books in Chad’s office, and creamy white pillared candles in the master bed chamber.

One hundred days later, after sourcing all new chandeliers and lamps, custom silk and hide rugs, upholstered sectionals, ottomans and leather sofas, and the interiors draped and hung with original artwork, Jo placed long-stemmed white flowers in a clear glass vase and took a look around the rooms brimming with luxurious, rich textures. When the doors opened on tour day, whispers spread throughout the alleyways, and soon the home quickly became one of the crowd’s favorites.

While the ground floor parlor was transformed into Megan’s elegantly appointed light, airy eclectic-styled space, the library transitioned into a tasting room. The formal dining area? A lounge.

Chad claimed one of four second-floor bedrooms for his work space. It’s not farfetched to capture lofty thoughts in the room that’s tree-top high. Furnished in blue velvet and tobacco-brown leather, you can almost smell the musk.

“We struggle with which room is our favorite,” Chad says. “Megan’s is definitely the library. Mine would have to be the kitchen.”

The kitchen was a poorly defined space when the couple purchased the property. A rear wall that separated the meal preparation area from a breakfast nook also blocked the views overlooking a quarter-acre of gardens behind the home.

It was begging for a major renovation. The idea was back-burnered during phase one but implemented in 2020, with the expertise provided by Travis Braxton of RMB Building and Design. The interior wall was removed; now more daylight floods the space, especially during the golden hour before sunset.

Chad, who shopped the inventory at Atlantic Appliance and chose an all-new array of Thermador products, is in his element behind the central island equipped with a six-eye gas range and double gas ovens. In addition to his career, he is also a chef trained in the classical French tradition who relishes a global palate inspired by worldly travels.

“We really enjoy cuisines of all influences,” Chad says, citing a recent trip to Japan. “As soon as I got back home, I started thinking about how to recreate those dishes in the kitchen.”

Chad’s culinary style hasn’t gone coastal or full Southern just yet, but he may explore more seafood dishes and expects to cook more meals with his cast iron skillet. One noticeable improvement to a household favorite, notes Megan: his pizza crust is, well, crustier.

For Chad, it’s not so much about what he cooks, or when, it’s about the all new view. In a word: “Breathtaking.”

The vibe inside the second-floor master bedroom epitomizes the theme of the extreme reinterpretation that streams throughout every room in the home. Interior designer Jo Howell calls it: “old age meets new soul.” The marriage of original 19th century qualities to a very 21st century lifestyle is simultaneously romantic and contemporary. “I didn’t want it to be too new,” Jo says. “I want it to tell a story.”

Architect John Ottaway designed the Queen Anne style residence, which was completed in 1883 for Edwin E. Burruss, the founder and president of First National Bank of Wilmington. Burruss, born in 1829, was also the organizer of the Clarendon Water Works Company. He was married to Elizabeth Northrop, born in 1855. Ownership of the house passed to their heirs when they both died in 1887.

A porch was added to the north elevation in 1912. The property was sold in 1922 to Louis Poisson, an attorney and North Carolina legislator, and his wife, Gethyn Rugan. The home remained in the Poisson family until 1995 when it was purchased by Doug and Margi Erickson, who operated a bed and breakfast.

In 1999, the Ericksons sold the house to the Bankson family. Chad and Megan are the fifth owners in the 137-year history of ownership. The neighborhood is a designated National Register district.