The Love of Fishing 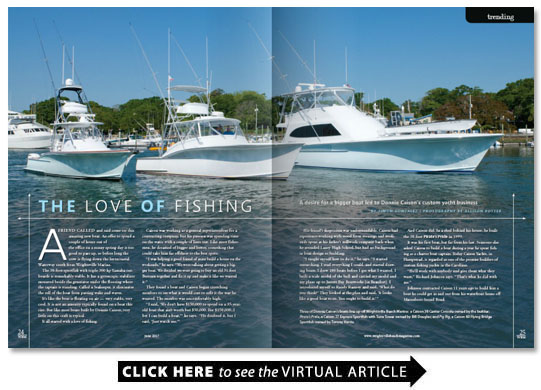 A friend called and said come see this amazing new boat. An offer to spend a couple of hours out of the office on a sunny spring day is too good to pass up so before long the crew is flying down the Intracoastal Waterway south from Wrightsville Marina.

The 38-foot sportfish with triple 300 hp Yamaha outboards is remarkably stable. It has a gyroscopic stabilizer mounted beside the generator under the flooring where the captain is standing. Called a Seakeeper it eliminates the roll of the boat from passing wake and waves.

It’s like the boat is floating on air — very stable very cool. It is not an amenity typically found on a boat this size. But like most boats built by Donnie Caison very little on this craft is typical.

It all started with a love of fishing.

Caison was working as a general superintendent for a contracting company but his passion was spending time on the water with a couple of lines out. Like most fishermen he dreamed of bigger and better something that could take him far offshore to the best spots.

“I was helping a good friend of mine build a house on the weekends ” he says. “We were talking about getting a bigger boat. We decided we were going to buy an old 31-foot Bertram together and fix it up and make it like we wanted it.”

They found a boat and Caison began crunching numbers to see what it would cost to refit it the way he wanted. The number was uncomfortably high.

His friend’s skepticism was understandable. Caison had experience working with wood from evenings and weekends spent at his father’s millwork company back when he attended Laney High School but had no background in boat design or building.

“I taught myself how to do it ” he says. “I started researching. I read everything I could and started drawing boats. I drew 100 boats before I got what I wanted. I built a scale model of the hull and carried my model and my plans up to Jarrett Bay Boatworks [in Beaufort]. I introduced myself to Randy Ramsey and said ‘What do you think?’ They looked at the plan and said ‘It looks like a good boat to us. You ought to build it.'”

And Caison did. In a shed behind his house he built the 38-foot Pirate’s Pride in 1999.

It was his first boat but far from his last. Someone else asked Caison to build a boat during a year he spent fishing as a charter boat captain. Today Caison Yachts in Hampstead is regarded as one of the premier builders of custom fishing yachts in the Carolinas.

“He’ll work with anybody and give them what they want ” Richard Johnson says. “That’s what he did with me.”

Johnson contracted Caison 11 years ago to build him a boat he could get in and out from his waterfront home off Masonboro Sound Road.

“I only have 3 feet of water and limited space ” Johnson says. “I was determined to have a boat that would fit but I wanted to get the biggest boat I could. I kept hearing about this guy Donnie Caison and seeing these big beautiful boats that he was building. Finally I gave him a call one day. He looked and said ‘You can easily get a 38-foot boat with a super shallow draft.’ He has this whole CAD/CAM system so we sat down and designed a boat together with tunnel hulls. The tunnels allow you to get into shallow water.”

The process with Johnson is the same one Caison takes with all his clients.

“I’ve never built the same boat twice ” Caison says. “Every one is different. You get somebody like Richard who comes in his vision of what he wants and what he needs is completely different from what someone else wants and needs.”

There are similarities. Caison builds classically flared Carolina hulls. His hulls are made of cold-molded wood sealed with high-strength marine epoxy and covered with a protective skin of fiberglass. Yet each is unique based on the owner’s choice of size power style and amenities like icemakers freezers for bait live wells touch-screen electronics and even refrigerated cup holders on the bridge.

“Even if you know Carolina boats the flare shape there’s minute differences ” Caison says. “My uniqueness is I not only build them but I design them. I model in 3D CAD. I can build the hull I can paint the hull I can wire the boat. I don’t count on anybody else. I have great people working for me and I don’t have to do much more than design them now but at some stage of my career I’ve done every aspect of this process. I don’t know that there’s a lot of boat builders around that can say that.”

Even after building the first boat Caison didn’t really intend to make a living at it. All he wanted to do was fish. Running charters out of Dockside would have been enough. But people began to notice his boat was something special. It would pass bigger vessels on the way out and would be the first one back after a day of fishing.

“I’d be all cleaned up and fueled up before they got back ” he says.

He picked up a couple of jobs subcontracting to make hulls then built a 64-footer. He moved out of the shed and into the old Bennett Brothers building in Porters Neck then farther north to the current boatyard in Hampstead.

Although he’s never taken a boat design course and doesn’t have an engineering background Caison has an analytical mind. That’s the secret to combining craftsmanship with physics and creating precise balanced craft that slice through the water.

“It’s all by math ” he says. “You know where you’re going to float based on the volume and weight of the hull. You don’t have to do super advanced calculus equations. It’s very simple formulas and they are all readily available. You can find a design manual at the library downtown and it’ll give you the displacement formula that they’ve been using since the 1700s to design sailing boats. It’s the same thing. It’s not new science.”

At first the calculations were done by hand. Now they are done with software.

“If you know how to input it the computer does the hard math ” he says.

Caison hasn’t forgotten his roots or his motivation. No matter how big no matter how many luxury appointments no matter the amenities each of his boats has something in common with that first one he built for himself.

See “Sea State” in the May 2015 Wrightsville Beach Magazine for a comprehensive look at the North Carolina boat-building industry.