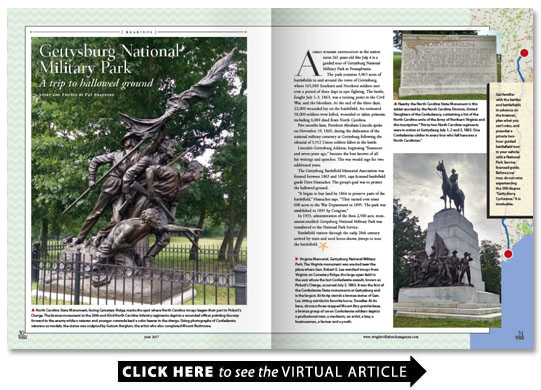 A great summer destination as the nation turns 241 years old this July 4 is a guided tour of Gettysburg National Military Park in Pennsylvania.

The park contains 3 965 acres of battlefields in and around the town of Gettysburg where 165 000 Southern and Northern soldiers met over a period of three days in epic fighting. The battle fought July 1-3 1863 was a turning point in the Civil War and the bloodiest. At the end of the three days 22 000 wounded lay on the battlefield. An estimated 50 000 soldiers were killed wounded or taken prisoner including 6 000 dead from North Carolina.

Five months later President Abraham Lincoln spoke on November 19 1863 during the dedication of the national military cemetery at Gettysburg following the reburial of 3 512 Union soldiers fallen in the battle.

Lincoln’s Gettysburg Address beginning “fourscore and seven years ago ” became the best known of all his writings and speeches. The war would rage for two additional years.

The Gettysburg Battlefield Memorial Association was formed between 1863 and 1895 says licensed battlefield guide Dave Hamacher. The group’s goal was to protect the hallowed ground.

“It began to buy land by 1864 to preserve parts of the battlefield ” Hamacher says. “They turned over some 600 acres to the War Department in 1895. The park was established in 1895 by Congress.”

In 1933 administration of the then-2 500 acre monument-studded Gettysburg National Military Park was transferred to the National Park Service.

Battlefield visitors through the early 20th century arrived by train and used horse-drawn jitneys to tour the battlefield.