Pickleball Whiffs its Way Into Wilmington 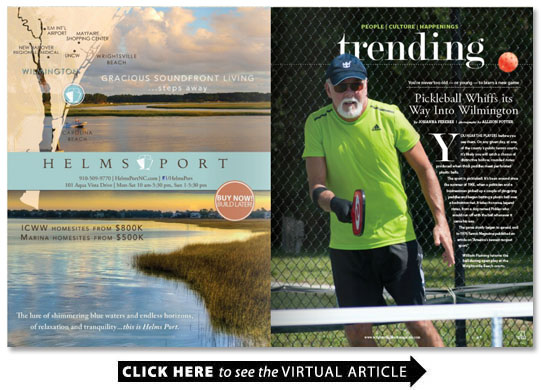 You hear the players before you see them. On any given day at one of the county’s public tennis courts it’s likely you will catch a chorus of distinctive hollow rounded notes produced when thick paddles meet perforated plastic balls.

The sport is pickleball. It’s been around since the summer of 1965 when a politician and a businessman picked up a couple of pingpong paddles and began batting a plastic ball over a badminton net. It takes its name legend states from a dog named Pickles who would run off with the ball whenever it came his way.

The game slowly began to spread and in 1976 Tennis Magazine published an article on “America’s newest racquet sport.”

Today pickleball has become America’s fastest growing racquet sport with an estimated 2 million players nationally. It’s arguably the most user-friendly sport around and frequently enjoyed by the country’s eldest inhabitants.

“It’s the only sport at our ages that we can play as a team sport and get exercise ” says 66-year-old Jim Chaffins who plays three days a week at the Wrightsville Beach tennis courts. “Basketball’s probably out because of knees and so forth. Skills have eroded. A lot of us can’t play tennis anymore but we can play pickleball.”

Picture a thicker oversized pingpong paddle a tennis court cut in half and a ball with holes through it like a whiffle ball. Most of the action is at the net so there’s not a lot of ground to cover. Exchanges can be rapid fire so hand-eye coordination helps.

“It isn’t such a large court so you can cover the area ” says Dick Gurley 70 one of the regulars at the Wrightsville Beach courts. “You do get a lot of exercise. It’s not a slow sport. You can hit the ball hard.”

The sport’s initial surge in Southeastern North Carolina can be traced back to 2011 in Brunswick County where a tribe of players discovered a new accessible activity.

“I got here in 2011 and there were six to 10 people playing in Brunswick Forest ” says Marty Smith a USA Pickleball Association ambassador. The job of an ambassador for the USAPA is to grow the sport.

Brunswick Forest is now home to an estimated 500 players with nearly 800 in the town of Leland and 1 300 in Brunswick County as a whole.

This hodgepodge of a sport has bled over county lines into the Wilmington area.

The club now has more than 200 local members and continues to grow.

The sport came across the Heide Trask Drawbridge in 2015 when the Wrightsville Beach Foundation donated pickleball nets for residents to use and visitors to rent. Tennis courts were lined and lessons were added under Jackie Jenkins tennis professional and instructor for the town’s parks and recreation department.

“If you are familiar with tennis or if you have enjoyed tennis in the past and have enjoyed playing at the net in doubles it’s very similar to that ” says Katie Ryan recreation program supervisor of Wrightsville Beach Parks and Recreation. “Even if you’ve never played tennis it’s an enjoyable game.”

“About a year ago several of us took lessons ” he says. “We liked it so much we started checking out the nets on Tuesdays and Thursdays.”

The group began to grow through others taking lessons people becoming intrigued when walking past the courts and word of mouth. Now there are usually about 16 players who show up for open play on Tuesday Thursday and Saturday mornings.

“I took lessons out here and then we evolved from the lessons ” says Donna Forsythe 64 who drives from Ogden. “This group is very friendly. We want to win but we want to be friends. It’s a friendly game friendly competition.”

The ages vary. On a beautiful warm Thursday morning in April the youngest was 37 and the oldest 80. Like Chaffins a former basketball player most are retirees who want to remain active.

“I used to play tennis and I walk now ” says Mary Sneeden who’s 69. “I dislocated both knees. This is a great sport for not getting hurt especially when you get older. Because of the small court we can reach the balls. It’s a great senior game. It’s quick and it keeps your mind quick. The volleying is so much fun. It feels great.”

A proximity to the net restricted flight of the hollowed ball and relative size of the court all aid in allowing players to stay simultaneously safe and mobile.

“It’s really gravitated toward the seniors because the athletic people could no longer participate in their sport but they can participate in pickleball ” says Jane Klippel a pickleball instructor at the YMCA.

Klippel witnesses firsthand the satisfaction new players experience as they realize pickleball can fill the void in their still-athletic hearts.

“A lot of people take it up because tennis and racquetball are just too hard on their body ” Klippel says. “It’s a little bit slower but it has the same competitiveness that those sports have. Most of the people that play would say that they’re addicted to it. It’s so fun.”

Chaffins is an evangelist for the group at Wrightsville Beach always trying to recruit new players. He keeps extra racquets in his bag in case someone wants to drop in and try it.

“It doesn’t take a great deal of expertise. You don’t even have to have played a sport before and we’ll teach you how to play ” he says. “Pickleball as a culture is friendliness and openness. It’s the camaraderie and the ability to play a team sport competitively at an advanced age. There’s no other sport that can say that. I watch these tennis players come out here some of these older tennis players and they spend more time running after the ball than they do hitting it.”

Mike McGrath the director of training for the Cape Fear Pickleball Club hosts free sessions each Saturday at 10:30 a.m. at the Greenfield Lake Park courts that are open to the public.

“Anybody who shows up we’ll teach them how to play ” he says.

Easy to learn yet difficult to master this habit is hard to break.