Through the eyes of his Wilmington caddie 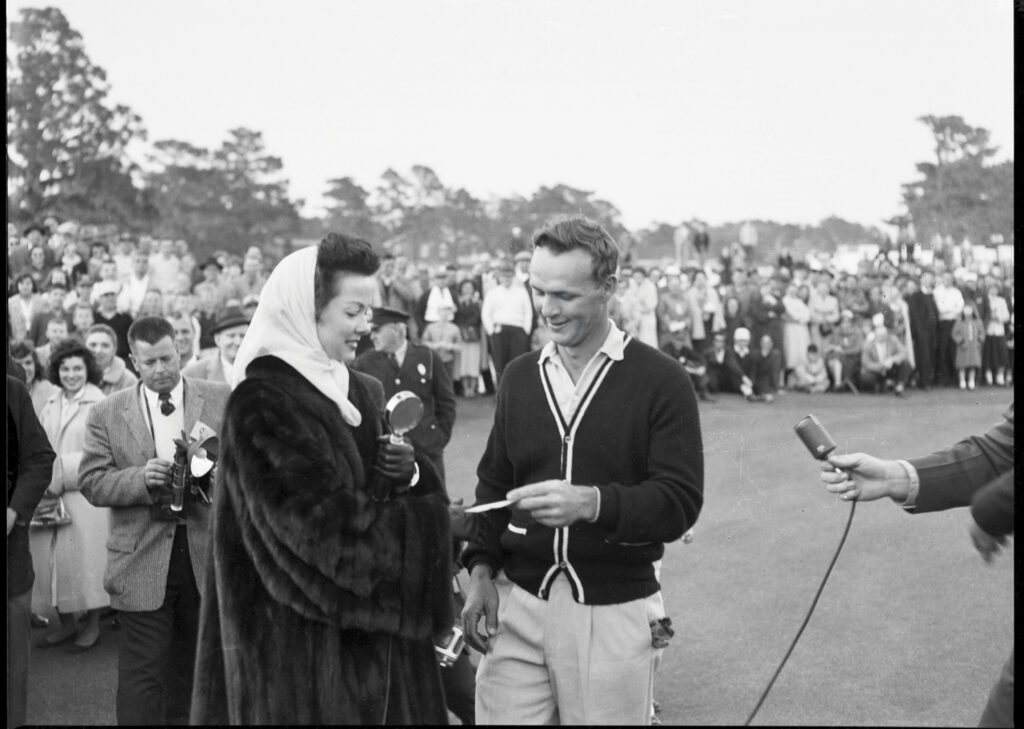 In the spring of 1957, before he became The King, before there was an Arnie’s Army, and before he was golf’s greatest ambassador, Arnold Palmer had only four PGA Tour victories.

Number five came at the 1957 Azalea Open. Palmer shot an aggregate 6-under 282 to win the tournament by one stroke over Dow Finsterwald. With that win, he earned $1,700 and the love of Wilmingtonians. That victory helped set the stage for a life filled with fame, fortune and honor.

The next year he went on to win his first major, the Masters, an achievement that helped usher in golf’s modern era, the birth of Arnie’s Army, and Palmer’s legendary career.

The Azalea Open Invitational, an official PGA event in Wilmington from 1949 to 1970, was the centerpiece of Wilmington’s annual Azalea Festival. Held at the venerable Donald Ross-designed Cape Fear Country Club, the 1956 tournament featured the tour’s best golfers. Among them wasa lean, scrappy, chain-smoking, virtually unknown professional named Arnold Palmer. His caddie was John Gemmell Jr., a New Hanover High School golf standout who recalled his three tournaments with The King from his hospital bed on June 17, 2022, and then by telephone on June 21, 23 and 28, 2022.

During the 1956-58 PGA Azalea Open Invitational Tournaments in Wilmington

Arnold’s first appearance at the Azalea Open was in 1954 as an amateur. He placed seventh and then went on that same year to win the U.S. Amateur. In 1956, he returned to Wilmington as a professional and played here for three consecutive years: 1956, ’57 and ’58, and I caddied for him each of those years. He did not return after those three years. Young club members at the Cape Fear Country Club got first choice as caddies for the tournament because we played there and knew the course well. In the 1956 event, I was slated to caddie for Sam Snead, but he withdrew, so I was assigned to Palmer, whom I had never met.

I was a sophomore at New Hanover High School that first year in 1956. I knew that Arnold had won the 1954 U.S. Amateur and that his only PGA victory was the Canadian Open the previous year. Other than that, neither I nor anyone else knew much about Arnold. He didn’t really start making headlines until his victory at the Masters in 1958.

Each of his three years here, both Arnold and his wife, Winnie, were guests at the home of Dr. and Mrs. Graham Barefoot on Forest Hills Drive. I would meet Arnold at the course each morning to hit range balls and practice his putting before tee time. He was always happy, in a good mood and enthusiastic but very focused, and he expected me to be the same.

During that first year in 1956, I caddied for him on Tuesday and Wednesday’s practice rounds before the start of the four-day tournament on Thursday. I will never forget the intensity and force with which he hit the ball. He didn’t have a classic swing, like tour professionals Ben Hogan or Gene Littler. I would describe his swing as more of a journeyman’s approach with immense strength especially with his woods. His drives were lightning fast, low off the tee like a bullet and barely rising. He had developed his own style, and he hit it straight and pure, right in the screws. It was something to see. To go with that hard driving, unique swing, he had a relentless winner’s instinct, and I knew he would soon be a major champion.

The driver and fairway woods in that era were made of persimmon, and the shafts were steel. Always looking for perfection, each evening after his round, he would go to the club shop and tinker with his clubs, making small adjustments with files, screwdrivers and other tools — a trait he maintained throughout his career.

Back then, the ball covers were soft and less durable compared to those today, so he would change balls often during every round. He hit them so hard they simply couldn’t retain their shape. He could easily go through a dozen balls in one round. A genius with wedge and putter, he was also remarkable at reading the greens. In 1956, not having played here, however, it was difficult for him on the approach shots, and so he asked me to help him with distance and club selection every hole, which I did. On hole number 15, a five par, he consistently hit driver and 1 iron to the green each day. His 1 iron shot was like a missile, rising only to about 10 feet and so straight it was scary.

He placed fourth that first year in 1956, and then came back the next year to win. Each year, he paid me $100, win or lose, for the five days plus some gloves, balls and a putter. It was a lot of money for a high school kid, and a fabulous opportunity for me to learn from a man who would become a national treasure.

Even when he was young and unknown, Arnold was very personable, always greeting the crowd and signing autographs. He treated me with kindness and respect, and I knew even then that he was a man who would love his fans, and they would return that love. It was a remarkable and fortunate time for me and a very precious memory.

In his career, Arnold Palmer (1929-2016) won 55 regular PGA events and seven majors, including four Masters, two British Open Championships, and one U.S. Open. Always the competitor, he was runner-up in 10 majors, losing the U.S. Open three times in 18-hole playoffs. Active and engaged in his later years, he won multiple events on the PGA Senior Tour. He won two events later in ’56 and one in ’57 before coming to Wilmington. He became highly successful in business, designing over 300 golf courses worldwide. Perhaps the most revered of all his qualities was the engaging personality that made him The King in the eyes of millions of adoring fans.

John Gemmell Jr. played on the New Hanover High School golf team during the three years he caddied for Palmer. In his senior year, he was ranked second in the state only behind the great Raymond Floyd, who played for Fayetteville High School before turning professional.

Palmer asked Gemmell to go on tour with him, but Gemmell respectfully declined. He went instead to Hampden-Sydney College where he played on the golf team for four years. Known for his friendly, congenial personality and his mastery at chipping and putting, Gemmell was the 1976 Wilmington City Open Champion and the 1976 Cape Fear Country Club Champion, where for many years he held the low amateur record score of 64.

Ever the fierce competitor, he lost his final match with lung cancer on July 5, 2022.  John Gemmell Jr. was 81.