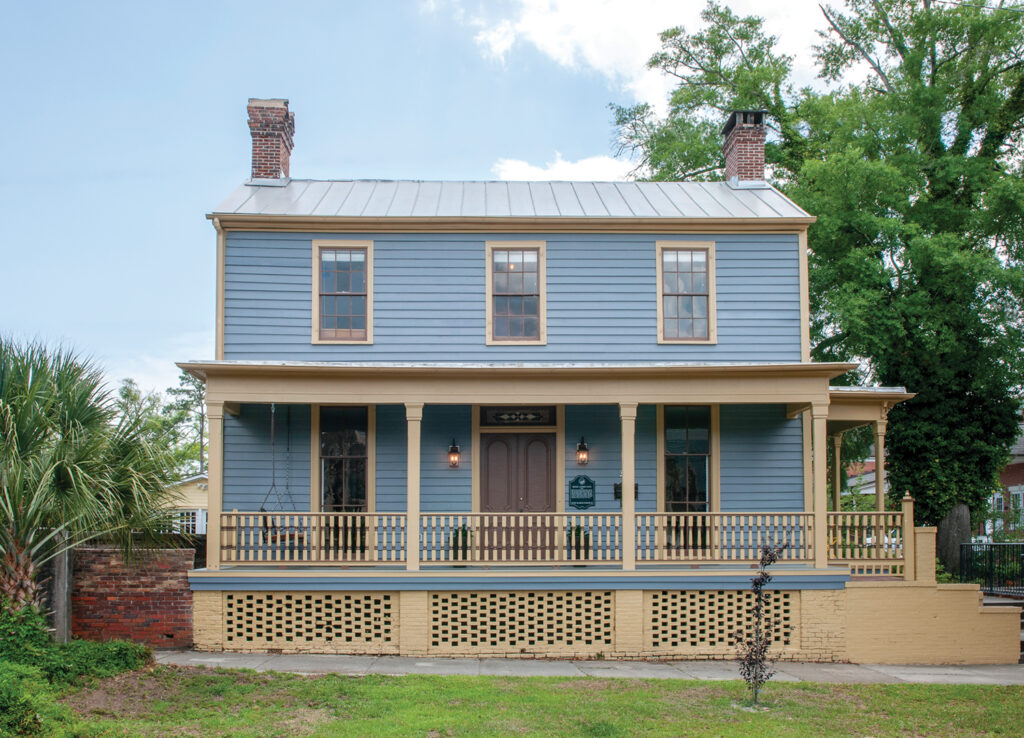 Built in 1808, the Langdon home restored by Jim and Laura Luddy is the eightholdest surviving home in Wilmington and one of the last remaining Federal-style homes, also referred to as Adam style for the British brothers who created the design. The Federal style reigned in residential design from 1789 to 1820. Photo by Allison Potter

Members of the Historic Wilmington Foundation stood on the steps of City Hall in 2019 and announced the list of the year’s most threatened historic places. Topping the list was the Richard Langdon home on Orange Street, adjacent to First Presbyterian Church.

“A property like that, that’s a special one, there aren’t many like it left in town and once it’s gone, it’s gone and a lot of history goes with it,” says Ashley Garner of Ashley B. Garner & Associates, who listed the home in 2019.

Built in 1808, the Langdon home is recorded as Wilmington’s eighth-oldest. By 2019, it was in utter disrepair. The ceilings were caving in, and its walls were crumbling. It needed someone to rescue it from being torn down — someone willing to invest time, energy and money in a full-scale restoration.

“I said there’s absolutely no way,” says Laura Luddy, smiling at husband Jim Luddy while sitting in the living room of the newly restored home three years later. A framed Rehabilitation Award from the Historic Wilmington Foundation is perched on an easel in the kitchen.

“I couldn’t see what Jim was seeing, all I saw was an old house that needed a lot of work,” says Laura, remembering when they first toured the house.

“My wife was looking at me, it was dangerous to walk through,” says Jim. “But I really liked the structure of the house and the layout.”

The couple, who are from Pennsylvania, had vacationed in Wrightsville Beach with their three children and six grandchildren and especially enjoyed visiting historic downtown Wilmington. They had been casually looking for a historic home when the Langdon home came on the market.

“One of our plans for retirement was to get a historic home that needed some work,” Jim says. “We weren’t looking for something this extensive, but not a lot of historic homes come available in certain locations, and this is a great location.”

The Luddys closed on the 214-year-old home in the summer of 2019 and embarked on quite the restoration journey.

“There were several times we said, ‘Maybe this is too big of a project,’” laughs Jim.

Today, the Langdon home has been completely restored. It boasts a spectacular view of the 185-foot-tall First Presbyterian Church steeple from the front and a view of the Basilica of Saint Mary from the back.

“They brought back to life a house that had been on our most threatened places list so it’s a success all around and we are very proud to call the Luddys neighbors and friends and preservationists,” says Travis Gilbert, the Historic Wilmington Foundation executive director.

Because of its location on a bluff, the Langdon home survived the fires that ravaged Wilmington during the 18th and 19th centuries sparked by flying embers from steam vessels traveling up the Cape Fear River. Intricate mortise and tenon joints, considered to be stronger than nails, helped the house survive every major hurricane to hit the area since 1808.

The home got lucky again when the Luddys came to its rescue, restoring the Federal-style home to its former glory.

The Federal style dominated American residential architecture from roughly 1789 to 1820. It is also referred to as Adam style, named for the Adam brothers, British architects who developed the design that borrows heavily from its predecessor, the Georgian style, using a center hallway to separate the floor plan equally on either side.

“It has a lot of symmetry and paneled front doors and often a transom light above the door. Inside there would have been starbursts above the mantels,” Gilbert says. “It’s a very light style and you see all of those elements with the Langdon house.”

It is believed the iconic Southern front porch originated from Federal-style architecture. The Langdon home features first floor front and side porches and double-decker porches in the back.

“We love our front porch culture here in Wilmington and that has been passed down from generation through generation,” Gilbert says. “One of my favorite parts of the Langdon house is those triple sash windows on the front and the side. They can collapse and act as doorways or passages onto the porch.”

The owners changed the exterior color from turquoise green to cobalt blue. All exterior changes to historic homes must be approved by the Wilmington Preservation Commission.

“We had seven COAs (Certificate of Appropriateness) issued by the Wilmington Preservation Commission and planners for all exterior work in accordance with the Wilmington Design Standards for Historic Districts and Landmarks,” says Jim.

As windows served to bring fresh air into the home before the invention of air conditioning, fireplaces heated the home. The home has three chimneys running through all three levels with a total of 10 fireplace fronts. The living room mantel is made of soapstone.

“It has the capacity to store twice the heat of steel so that’s why they would build them out of soapstone,” says Jim who did much of the restoring to the chimney fronts himself.

Pocket doors of heart pine leading from the living room to the kitchen, discovered in the basement, were restored and reinstalled in their original location. A kitchen fireplace front was moved upstairs to make room for the oven and hood.

When the home was built it was common for the kitchen and dining to be in the basement.

“If you go to the Bellamy Mansion or Latimer House you’ll notice the kitchens and the dining rooms were in the English half basement,” says Gilbert. “When I explored with Jim during the rehabilitation of the home we noticed there was a mantel in the basement. That was a great visual clue in the architecture that the dining would have been in the basement along with the areas for kitchen and prep work.”

The original heart pine flooring was kept and restored.

“You can see the older heart pine wood in the hallway, we had them all refinished,” says Jim. “We saved all the trim, and all the windows are the original windows.”

On the second level, each bedroom has its own fireplace front. A curly heart pine mantel was brought from the kitchen to an upstairs bedroom that looks out to the First Presbyterian steeple. Another bedroom uses a church pew for a window seat. An addition made to the back of the house sometime in the early 1900s added square footage to the upstairs master suite. A built-in cabinet in the master suite features detailed woodwork and glass doors.

The home originally was built for Richard Langdon and wife Jane Dunbibin Ward. Langdon passed away shortly after occupying the home in 1810. It was purchased in 1829 by Captain Samuel Russel and his wife, Anne Elizabeth Corby, and remained in that family for more than 30 years.

In 2000, First Presbyterian Church purchased the house. It was divided into apartments and used for the Wilmington Interfaith Hospitality Network to help struggling families get back on their feet.

The Luddys became part of the home’s history in July of 2019.

“We have been thrilled with it, we hope to have the home in the family for years to come,” says Jim.