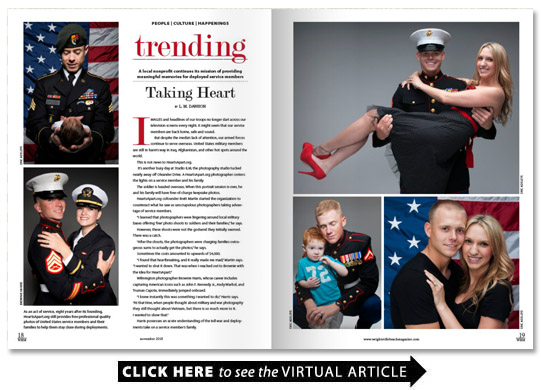 Images and headlines of our troops no longer dart across our television screens every night. It might seem that our service members are back home safe and sound.

But despite the media’s lack of attention our armed forces continue to serve overseas. United States military members are still in harm’s way in Iraq Afghanistan and other hot spots around the world.

This is not news to HeartsApart.org.

It’s another busy day at Studio ILM the photography studio tucked neatly away off Oleander Drive. A HeartsApart.org photographer centers the lights on a service member and his family.

The soldier is headed overseas. When this portrait session is over he and his family will have free-of-charge keepsake photos.

HeartsApart.org cofounder Brett Martin started the organization to counteract what he saw as unscrupulous photographers taking advantage of service members.

“I learned that photographers were lingering around local military bases offering ‘free’ photo shoots to soldiers and their families ” he says.

However these shoots were not the godsend they initially seemed. There was a catch.

“After the shoots the photographers were charging families outrageous sums to actually get the photos ” he says.

Sometimes the costs amounted to upwards of $4 000.

“I found that heartbreaking and it really made me mad ” Martin says. “I wanted to shut it down. That was when I reached out to Brownie with the idea for HeartsApart.”

“I knew instantly this was something I wanted to do ” Harris says. “At that time when people thought about military and war photography they still thought about Vietnam but there is so much more to it. I wanted to show that.”

Harris possesses an acute understanding of the toll war and deployments take on a service member’s family.

“It’s not just the service member who makes the sacrifice ” he says. “It’s also the spouse who takes over at home and the children who go long stretches without a parent.”

Eight years after its inception the organization’s photographers are still bringing these sacrifices to light.

“Showing a service member with their family makes it personal ” Harris explains. “The photographs have really helped humanize war.”

These are not your typical stuffy photo shoots. Families are encouraged to get creative and bring props.

“I always ask families what they like to do together and use it as a starting point ” says Eric Adeleye a HeartsApart.org photographer from Wilmington. “One family liked to read together. So for part of the shoot they all wore pajamas and gathered around the service member while he read a book to everyone. Every shoot is different. We get to know each family throughout the course of the shoot and they make each one unique.”

Moving toward the rear of the studio you come upon the reverse side of a photo backdrop. Once blank it’s now almost entirely covered with handwritten notes and drawings from families thanking HeartsApart.org for positively impacting their lives.

“It’s astounding how truly appreciative the families are ” Harris says. “At my first shoot the wife started crying. She was so grateful. She didn’t think anyone cared about the military anymore.”

Harris photographed Suzy Bucierka and her husband in 2011. Like many others Bucierka is profoundly thankful for the work HeartsApart.org is doing.

“It’s one of my most memorable photography experiences ever ” she remembers. “We still have the photos framed all around our house. They are as special as our wedding photos. They have gone above and beyond to share their time and talents with us. It means so much to realize there are people out there who care about the military and their families regardless of politics.”

Bucierka’s husband has taken his card on multiple deployments.

“My husband keeps that card on him at all times. It means so much to him ” she says. “Even when he’s home he always carries it in his wallet.”

The organization focused on North Carolina — home to Camp Lejeune Fort Bragg Pope Air Force Base Seymour Johnson AFB Marine Corps Air Station Cherry Point and MCAS New River — when it was founded in 2010. It now works with more than 450 photographers in 46 states with hopes of further expansion.

Mary Heath who came aboard as project director in March 2011 was instrumental to the organization’s foundation. Her favorite part of her role was interacting with the families.

“I was there for many of the sessions ” she says. “I saw what these families go through and how appreciative they are.”

Heath continued to keep in touch with many of the families after the shoots concluded.

“One wife told me that she blew up one of the photos of her husband and hung it in her 18-month-old daughter’s room ” she says. “She wanted to keep her daughter’s memory of her father fresh while he was away. It worked. When the service member returned home their daughter ran right up to him at the airport calling out ‘Daddy daddy!'”

Although she no longer works with the organization Heath continues to cherish her time there.

“It has been one of the best and most worthwhile decisions I’ve ever made ” she says.

As HeartsApart.org looks to the future its mission is to stay the course.

“The goal is always for more photographers and more shoots ” Martin says. “We are committed to this and want to help as many service members and families as we can. So long as our forces continue to be sent overseas and put in harm’s way we will be here to support them.”

In recent years HeartsApart.org has expanded to offer sessions for babies born while a parent is away on deployment.

“It’s profound how much a photograph can mean ” Martin says. “It’s something that’s difficult to put into words.”

Both founders share an unwavering dedication in their continued support of the organization.

“Working with HeartsApart is my way to give back ” Harris says. “This is something that will be here and continue after we are gone.”