The Flotilla will Float 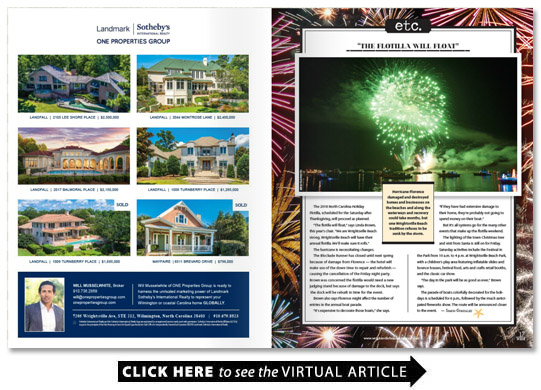 The 2018 North Carolina Holiday Flotilla scheduled for the Saturday after Thanksgiving will proceed as planned.

The hurricane is necessitating changes.

The Blockade Runner has closed until next spring because of damage from Florence — the hotel will make use of the down time to repair and refurbish — causing the cancellation of the Friday night party. Brown was concerned the flotilla would need a new judging stand because of damage to the dock but says the dock will be rebuilt in time for the event.

Brown also says Florence might affect the number of entries in the annual boat parade.

“It’s expensive to decorate those boats ” she says. “If they have had extensive damage to their home they’re probably not going to spend money on their boat.”

But it’s all systems go for the many other events that make up the flotilla weekend.

The lighting of the town Christmas tree and visit from Santa is still on for Friday. Saturday activities include the Festival in the Park from 10 a.m. to 4 p.m. at Wrightsville Beach Park with a children’s play area featuring inflatable slides and bounce houses festival food arts and crafts retail booths and the classic car show.

“The day in the park will be as good as ever ” Brown says.

The parade of boats colorfully decorated for the holidays is scheduled for 6 p.m. followed by the much anticipated fireworks show. The route will be announced closer to the event.