Man! You should have been here last week! 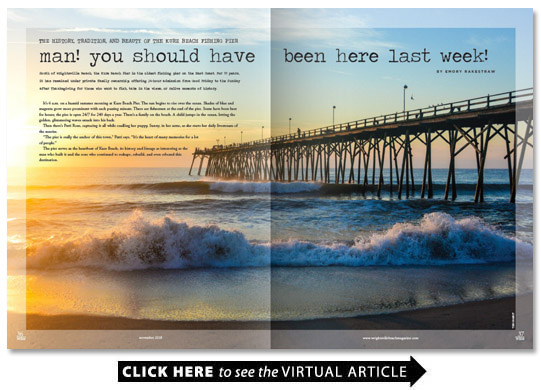 It’s 6 a.m. on a humid summer morning at Kure Beach Pier. The sun begins to rise over the ocean. Shades of blue and magenta grow more prominent with each passing minute. There are fishermen at the end of the pier. Some have been here for hours; the pier is open 24/7 for 240 days a year. There’s a family on the beach. A child jumps in the ocean letting the golden glimmering waves smack into his back.

Then there’s Patti Rose capturing it all while cradling her puppy Sunny in her arms as she starts her daily livestream of the sunrise.

“The pier is really the anchor of this town ” Patti says. “It’s the heart of many memories for a lot of people.”

The pier serves as the heartbeat of Kure Beach its history and lineage as interesting as the man who built it and the sons who continued to reshape rebuild and even rebrand this destination.

The Origins of a Town and Pier

Born in Denmark in 1851 Hans Andersen Kure first went to sea as a cabin boy and later became a captain. A fateful shipwreck off the North Carolina coast left him hospitalized in Beaufort. He was smitten with the area and after returning to Denmark he and his wife Ellen Mueller Kure — who served as a lady-in-waiting at the Danish court of Christian IX speaking up to seven languages — immigrated to America.

Hans opened a ship chandler and stevedore business at Carolina Beach in 1879. In the early 1900s he sold some of his holdings and purchased 900 acres of land south of Carolina Beach spanning to Fort Fisher eventually establishing the Kure Land and Development Center.

In 1913 a year before his death he produced a map of Fort Fisher Sea Beach later known as Kure’s Beach and eventually Kure Beach.

In 1923 Lawrence Christian (L.C.) Kure third-born to Hans and Ellen built the first wooden fishing pier on the Atlantic coast. The structure was 120 feet long and 22 feet wide. But within a year shipworms had eaten away at the supports causing it to collapse.

L.C. tried again developing reinforced concrete pilings and posts that were 15 inches square and 35 feet long. The rebuilt pier was 240 feet long and 32 feet wide. The elements and storms continued to erode wear down and even destroy the structure but L.C. was not deterred. He spent most of his adult life rebuilding the pier sometimes from scratch determined to revive the heartbeat of Kure Beach.

Although L.C. built the first pier it took another sort of thinker to rebrand it. In 1952 Bill Robertson purchased the pier from his father-in-law. With a $20 typewriter and used camera he spent the next nine years marketing it with stories and photos later captured in his book “Man! You Should Have Been Here Last Week! … about fish and the people who catch them.”

“This has been my happy lot in life since I bought the Kure Pier in 1952 ? The ocean was full of fish and the public was ready to take its first real vacation since the war ” Robertson wrote in the introduction to his book. “In the first year we doubled the largest attendance the pier had had since 1923 ? I once took a survey did some figuring and determined that 80 000 fish had been caught from the pier that day. I knew no one would believe it so I cut the figure in half and wrote a story saying we caught 40 000 fish. Know what? No one believed that figure either!”

Since its last complete rebuild after Hurricane Bertha in 1996 the pier has remained standing. Hurricane Florence knocked down some of the railing in September but otherwise the structure withstood the storm.

That story is a favorite for Mike Robertson who purchased the pier from his father in 1984. Mike hasn’t counted the number of fish but he and his son Paul have begun estimating the number of visitors annually — a challenging task since the pier is open 24 hours a day from Good Friday to the Sunday after Thanksgiving.

“Realistically I’d say we get over a million visitors ” Mike says.

One factor in the popularity is that it’s free to stroll out on the pier and take in the sights.

“I’ve never understood why fishing piers charge to walk on them. It’s just too Yankee taxing everything ” Mike says with a laugh. “People come here for that reason just to be able to walk out here. A lot of people can just sit and look at the ocean enjoy the sun talk socialize.”

Mike estimates the pier has suffered total and partial destruction 33 times during its existence. Its heartbeat might be interrupted but it always starts again. Even after complete destruction in 1954 from Hurricane Hazel the original pierhouse was moved to the road and used as an eatery for relief workers. Today it’s still open and operating as the Kure Beach Diner just a stone’s throw away from the pier.

Since its last complete rebuild after Hurricane Bertha in 1996 the pier has remained standing. Hurricane Florence knocked down some of the railing when it roared through in September but otherwise the structure stood strong in the storm.

Under Bill’s ownership the pier saw the establishment of an arcade tackle shop and gift shop. Today Mike and faithful employees like Russ Kirtright who has been working the night shift here for 31 years keep Bill’s original vision intact. Paul representing the younger generation hopes to add and adapt to modern-day developments including social media and a live 24/7 webcam.

As modern methods such as sharing on social media become the new norm for marketing one thing remains. The oldest fishing pier on the East Coast is still entirely classic.

It’s the middle of the day hot and the pier is overflowing with fishermen tourists barefoot beachgoers taking a break from the sand and a few photographers.

The water is a crystal-clear turquoise and the sky is entirely void of passing clouds. There’s a man scaling a freshly caught fish. A teenage boy tosses bait to an eager pelican. There are waves crashing distant conversations and a smell of sunscreen salt sand and the occasional fish guts.

“I love working here and living here ” Mike says. “I’ve gone other places but I always come back here. When it gets bad I get in my truck and ride out on the beach and sit there watch the birds and the waves then come back in peace.”

The sun continues to rise in all its glory painting the ocean in shades of crimson gold and purple. Another morning begins at the iconic Kure Beach Pier.