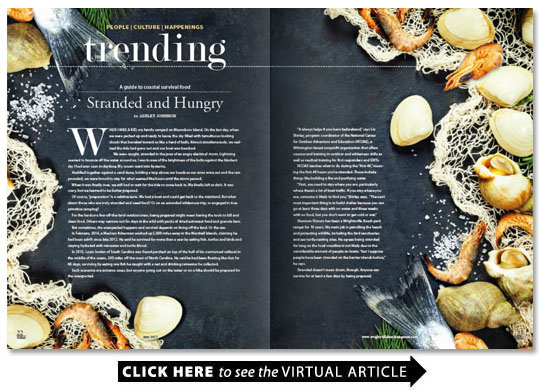 When I was a kid my family camped on Masonboro Island. On the last day when we were packed up and ready to leave the sky filled with tumultuous-looking clouds that barreled toward us like a herd of bulls. Almost simultaneously we realized the tide had gone out and our boat was beached.

We were caught stranded in the jaws of an angry electrical storm. Lightning seemed to bounce off the water around us. I was in awe of the brightness of the bolts against the blackest sky I had ever seen in daytime. My cousin went into hysterics.

Huddled together against a sand dune holding a tarp above our heads as our arms wore out and the rain pounded we were forced to stay for what seemed like hours until the storm passed.

When it was finally over we still had to wait for the tide to come back in. We finally left at dark. It was scary but we learned to be better prepared.

Of course “preparation” is a relative term. We had a boat and could get back to the mainland. But what about those who are truly stranded and need food? Or on an extended wilderness trip or engaged in true primitive camping?

For the hardcore live-off-the-land outdoorsman being prepared might mean having the tools to kill and clean food. Others may venture out for days in the wild with packs of dried astronaut food and granola bars.

But sometimes the unexpected happens and survival depends on living off the land. Or the sea.

In February 2014 a Mexican fisherman washed up 5 000 miles away in the Marshall Islands claiming he had been adrift since late 2012. He said he survived for more than a year by eating fish turtles and birds and staying hydrated with rainwater and turtle blood.

In 2015 Louis Jordan of South Carolina was found perched on top of the hull of his overturned sailboat in the middle of the ocean 200 miles off the coast of North Carolina. He said he had been floating like that for 66 days surviving by eating raw fish he caught with a net and drinking rainwater he collected.

Such scenarios are extreme cases but anyone going out on the water or on a hike should be prepared for the unexpected.

“It always helps if you learn beforehand ” says Liz Shirley program coordinator of the National Center for Outdoor Adventure and Education (NCOAE) a Wilmington-based nonprofit organization that offers courses and training in outdoor and wilderness skills as well as medical training for first responders and EMTs.

NCOAE teaches what to do during the “first 48 ” meaning the first 48 hours you’re stranded. These include things like building a fire and purifying water.

“First you need to stay where you are particularly where there’s a lot of boat traffic. If you stay where you are someone is likely to find you ” Shirley says. “The next most important thing is to build shelter because you can go at least three days with no water and three weeks with no food but you don’t want to get cold or wet.”

Shannon Slocum has been a Wrightsville Beach park ranger for 16 years. His main job is patrolling the beach and protecting wildlife including the bird sanctuaries and sea turtle nesting sites. He agrees being stranded for long on the local coastline is not likely due to the considerable amount of people on boats “but I suppose people have been stranded on the barrier islands before ” he says.

Stranded doesn’t mean doom though. Anyone can survive for at least a few days by being prepared.

The most important thing for someone who is indeed stranded Slocum says is to find a water source. With the right equipment water can be purified by boiling it or using store-bought products like iodine pills. But in this hypothetical you’re completely caught off guard.

“If you’re on a larger island it’s likely there is a freshwater source but if not put out anything like seashells that could catch rainwater ” Slocum says.

Plan B is a solar water still which is an evaporation trap that uses the sun to separate water from dissolved minerals such as salt.

Dig a hole put vegetation at the bottom to add extra moisture place a container on the bottom and a covering like a plastic tarp over the top. Wait 24 to 48 hours and the container will collect some fresh water.

Slocum says a container and plastic should be available by beach combing. As a guy who has spent countless hours patrolling the beach he knows what sorts of treasures can be found. Crab pots nets and even fishing poles are things he has seen abandoned in the sand.

These things would also come in handy with the next issue of survival: food.

Plants are murky territory when it comes to eating for survival for a couple of reasons. One is that it can be a challenge to find something that has enough nutrition to make a difference. Another is the matter of toxicity — consuming poisonous plants.

“You’d think everything is poisonous from what you hear ” he says “but if you have to eat for example 350 000 pounds of azalea which they say is poisonous to make you sick it’s not really harmful.”

He did say he has seen a goat graze on doghobble a common shrub with leathery green leaves and fall over dead.

It might seem a good rule of thumb to watch what animals eat to determine if it’s safe but Shirley says that’s an unreliable method because for example squirrels can eat nuts that humans can’t and rabbits can eat mushrooms that are toxic to humans.

“If you don’t know about plants or what something is I wouldn’t go around testing it ” she says.

Another issue for foraging food is regional scarcity.

Still there are a few things that could be beneficial.

The prickly pear cactus has multiple consumable parts. The pads can be eaten raw or cooked like a vegetable. Its fruit the red round bulbs that grow on the cactus’ leaves can also be digested for nutrients and as a source of water. Pluck and peel the fruits with caution using a stick or a protective layer of leaves as their outer skin is covered with tiny hair-like thorns.

The fruit of a Asimina triloba tree known as the pawpaw or the “poor-man’s banana ” can be eaten as the fruit conveniently drops to the ground when it is ripe. But stay away from oleander and lantana. Their pods can be toxic.

Cattails which thrive in wetlands could be a jackpot. They’re a good source of starch vitamins and minerals. An old Boy Scout motto declares “You name it and we’ll make it from cattails ” as the plant provides materials for food water shelter and fuel for a fire.

To consume cattails raw pull on a stalk. The lower white part of the stalk can be eaten as is as can any thin spaghetti-like roots that extend off the main root. To reach the root however requires some digging as they are often deeply entrenched in mud. To harvest starch from the main root which appears as a white hooked alligator tooth clean it crush it in fresh water or salt and let it sit. The starch settles to the bottom. This starch can be consumed or dried and used as flour. Avoid consuming the fiber of the root as this can cause a stomach ache. A bonus is that the cattail is home to a beetle grub that fish like so they’re a source for bait as well.

The grub might be the most beneficial part of the cattail because Slocum Hight and Shirley all agree that for anyone forced to survive in a wilderness setting in coastal Carolina the best bet is to go fishing.

On the sound-side of most Carolina barrier islands shellfish are plentiful.

Clams mussels oysters and even the occasional scallop can be found and eaten raw.

Mussels are easiest to forage as they embed in big mud banks and do not require a tool to crack them open and eat them.

With a little mucking around in the marsh sandbars it’s not too difficult to dig a few clams. A small pocket knife or flat-nose screwdriver would be the ideal way to open them but in a pinch another oblong shell could serve as a tool. Seagulls crack them by dropping them from the air onto hardened surfaces so it can be done.

A few tools would be necessary to pry (or tap) oysters off the clusters. Always remember you can slice yourself wide open on a single innocuous-looking oyster shell.

Bottom-dwelling blue crabs can be pulled right out of the marsh using bait tied to the end of a stalk of marsh grass or salvaged fishing line. It is also possible to catch a slow-moving fiddler crab along the water’s edge or a lazy fish stuck in a tidal pool with your bare hands. No pools? Then create a retention pond. Dig out a hole and create a barricade with a cluster of rocks on the ocean side. When the tide comes in and goes out again there might be some fish in the pond.

Beach combing could very well procure the materials to fish the traditional way.

“You could make a hook out of fishbone or found metal and string out of vine ” Slocum says.

Though it may seem like a gift from Neptune himself if you’re stranded and hungry he recommends avoiding fish that have washed up on the beach.

“There’s a reason it died and washed up there ” he says.

Almost anything that comes from the open ocean can be eaten raw. True survivalists can run a couple of sticks together to create a fire but in terms of survival cooking is optional.

Slocum’s primary tip for finding food is to do everything in the daytime.

“Trying to move around and do things in the dark is when you get hurt ” he says.

In addition to knowing how to collect water forage for plants or catch fish a final important element of being prepared for a survival situation is to always at least take matches and a pocket knife on any outdoor excursion.

In addition to providing heat for warmth and cooking Slocum says a fire has other benefits.

“It keeps bugs and other things away will alert anyone nearby that you’re there and it will keep you company ” he says. “Mentally it’s good to know you’re not by yourself.”