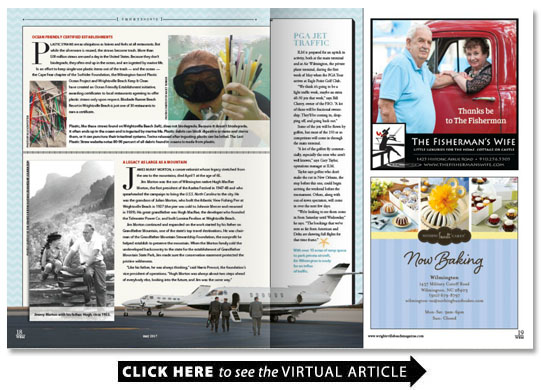 Plastic straws are as ubiquitous as knives and forks at all restaurants. But while the silverware is reused the straws become trash. More than 500 million straws are used a day in the United States. Because they don’t biodegrade they often end up in the ocean and are ingested by marine life.

In an effort to keep single-use plastic items out of the trash — and the ocean — the Cape Fear chapter of the Surfrider Foundation the Wilmington-based Plastic Ocean Project and Wrightsville Beach Keep It Clean have created an Ocean Friendly Establishment initiative awarding certificates to local restaurants agreeing to offer plastic straws only upon request. Blockade Runner Beach Resort in Wrightsville Beach is just one of 30 restaurants to earn a certificate.

A Legacy as Large as a Mountain

James McKay Morton a conservationist whose legacy stretched from the sea to the mountains died April 1 at the age of 65.

Jim Morton was the son of Wilmington native Hugh MacRae Morton the first president of the Azalea Festival in 1947-48 and who spearheaded the campaign to bring the U.S.S. North Carolina to the city. He was the grandson of Julian Morton who built the Atlantic View Fishing Pier at Wrightsville Beach in 1937 (the pier was sold to Johnnie Mercer and renamed in 1939). His great grandfather was Hugh MacRae the developer who founded the Tidewater Power Co. and built Lumina Pavilion at Wrightsville Beach.

“Like his father he was always thinking ” said Harris Prevost the foundation’s vice president of operations. “Hugh Morton was always about two steps ahead of everybody else looking into the future and Jim was the same way.”

ILM is prepared for an uptick in activity both at the main terminal and at Air Wilmington the private plane terminal during the first week of May when the PGA Tour arrives at Eagle Point Golf Club.

“We think it’s going to be a light traffic week maybe an extra 40-50 jets that week ” says Bill Cherry owner of the FBO. “A lot of those will be fractional ownership. They’ll be coming in dropping off and going back out.”

Some of the jets will be flown by golfers but most of the 150 or so competitors will come in through the main terminal.

“A lot of the golfers fly commercially especially the ones who aren’t well known ” says Gary Taylor operations manager at ILM.

Taylor says golfers who don’t make the cut in New Orleans the stop before this one could begin arriving the weekend before the tournament. Others along with out-of-town spectators will come in over the next few days.

“We’re looking to see them come in from Saturday until Wednesday ” he says. “The bookings that we’ve seen so far from American and Delta are showing full flights for that time frame.”