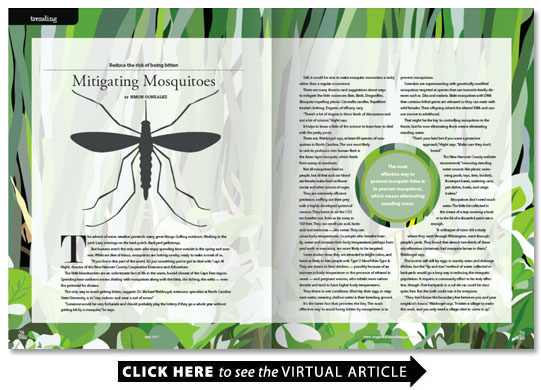 The advent of warm weather portends many great things: Grilling outdoors. Working in the yard. Lazy evenings on the back porch. Backyard gatherings.

But humans aren’t the only ones who enjoy spending time outside in the spring and summer. While we dine al fresco mosquitoes are lurking nearby ready to make a meal of us.

“If you live in this part of the world it’s just something you’ve got to deal with ” says Al Hight director of the New Hanover County Cooperative Extension and Arboretum.

The little bloodsuckers are an unfortunate fact of life in the warm humid climate of the Cape Fear region. Spending time outdoors means dealing with mosquitoes along with the bites the itching the welts — even the potential for disease.

The only way to avoid getting bitten suggests Dr. Michael Waldvogel extension specialist at North Carolina State University is to “stay indoors and wear a suit of armor.”

“Someone would be very fortunate and should probably play the lottery if they go a whole year without getting bit by a mosquito ” he says.

Still it would be nice to make mosquito encounters a rarity rather than a regular occurrence.

There are many theories and suggestions about ways to mitigate the little nuisances: Bats. Birds. Dragonflies. Mosquito-repelling plants. Citronella candles. Repellent-treated clothing. Degrees of efficacy vary.

“There’s a lot of dogma in these kinds of discussions and not a lot of science ” Hight says.

It helps to know a little of the science to learn how to deal with the pesky pests.

There are Waldvogel says at least 60 species of mosquitoes in North Carolina. The one most likely to sink its proboscis into human flesh is the Asian tiger mosquito which feeds from sunup to sundown.

Not all mosquitoes feed on people but all that suck our blood are female; males feed on flower nectar and other sources of sugar.

They are extremely efficient predators sniffing out their prey with a highly developed system of sensors. They home in on the CO2 we breathe out from as far away as 150 feet. They can smell uric acid lactic acid and ammonia — aka sweat. They can sense body temperatures. So people who breathe heavily sweat and increase their body temperature perhaps from yard work or exercising are more likely to be targeted.

Some studies show they are attracted to bright colors and twice as likely to bite people with Type O blood than Type A. They are drawn to beer drinkers — possibly because of an increase in body temperature or the presence of ethanol in sweat — and pregnant women who exhale more carbon dioxide and tend to have higher body temperatures.

They thrive in wet conditions. Most lay their eggs in stagnant water meaning shallow water is their breeding ground.

It’s the latter fact that provides the key. The most effective way to avoid being bitten by mosquitoes is to prevent mosquitoes.

Scientists are experimenting with genetically modified mosquitoes targeted at species that can transmit deadly diseases such as Zika and malaria. Male mosquitoes with DNA that contains lethal genes are released so they can mate with wild females. Their offspring inherit the altered DNA and cannot survive to adulthood.

That might be the key to controlling mosquitoes in the future but for now eliminating them means eliminating standing water.

“That’s your best bet if you want a proactive approach ” Hight says. “Make sure they don’t breed.”

Mosquitoes don’t need much water. The little bit collected in the crease of a tarp covering a boat or in the lid of a discarded paint can is enough.

“A colleague of mine did a study where they went through Wilmington went through people’s yards. They found that almost two-thirds of these miscellaneous containers had mosquito larvae in them ” Waldvogel says.

The insects will still lay eggs in marshy areas and drainage ditches but the “tip and toss” method of water collected in backyards would go a long way in reducing the mosquito population. It requires a community effort to be truly effective though. Five backyards in a cul-de-sac could be mosquito free. But the sixth could ruin it for everyone.

“They don’t know the boundary line between you and your neighbor’s house ” Waldvogel says. “It takes a village to make this work and you only need a village idiot to screw it up.”

If removing their ideal breeding grounds doesn’t work the next thing to try is destroying the larvae or killing the adults.

Mosquito fish eat larvae from the top of the water in backyard ponds. A dragonfly-friendly pond — with vegetation growing out of the water and flat rocks around it — is even better. Dragonfly larvae feed on mosquito larvae and adult dragonflies eat adult mosquitoes.

Hight recommends using Mosquito Dunks floating insecticides that contain bacteria proven toxic to the little bugs but safe for other wildlife and pets.

Bats are touted as a solution after the insects hatch.

“Bats will eat a lot of mosquitoes ” says Dave Weesner a former park ranger working at Wild Bird and Garden in Wilmington which sells houses designed to attract the nocturnal bug eaters.

While bats can be part of the solution Waldvogel says they aren’t likely to significantly reduce the skeeter population.

“Bats can be helpful but they are generalist feeders ” Waldvogel says. “If there’s something flying around a light pole they are probably going to eat it. Plus bats fly at night. If you’re getting bit during the day when Asian tiger mosquitoes are out bats don’t help.”

Purple martins eat insects during the day but they generally fly high while mosquitoes stay low. Mosquitoes are estimated to be about 3 percent of their diet.

If the mosquitoes have survived the attempts to eliminate their breeding grounds dodged the dragonflies bats and birds and are out looking for a meal the best bet to avoid being bitten is to confuse their receptors. That’s where bug-repelling plants can come in.

Sage thyme lavender lemon balm catnip basil peppermint and rosemary are among the herbs hyped for their confusing or repelling abilities. They can be planted around the deck in the backyard. The leaves can be crushed and the harvested oil rubbed on skin as a repellent. But while there are studies that show mosquitoes will avoid such plants don’t expect too much.

Citronella candles are another method of confusing the insects’ sensors. They generally work — providing the smoke is between predator and prey.

“Meanwhile mosquitoes upwind are sizing you up as a meal ” Waldvogel says.

Another option is clothing treated with repellent. Insect Shield a Greensboro-based company sells fabrics treated with permethrin that it says are effective against mosquitoes and no-see-ums and lasts through multiple washings.

While no single method is foolproof efforts to stop mosquitoes from breeding to kill the larvae and adults and to confuse their receptors can reduce the risk of being bitten when used in combination.

And when all else fails Hight strongly suggests going to an old-fashioned remedy — insect repellent. When applied to the skin properly it confuses mosquitoes by jamming their odor receptors.

“DEET almost always works ” he says. “There are people who think DEET is the worst thing possible but I’ve covered myself in it for 40 years and haven’t had any problems. You get back to risk and reward. Do you want to get chewed on by mosquitoes and get a virus or do you want to take the .0001 percent risk of having a reaction?”