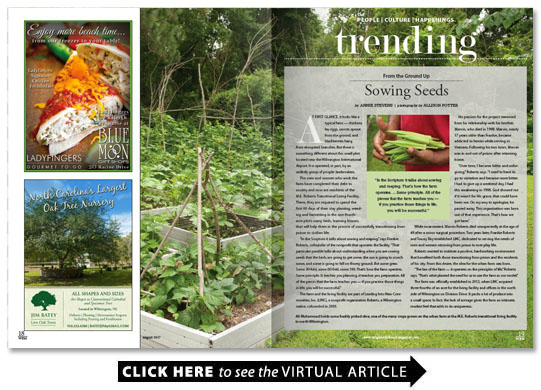 At first glance it looks like a typical farm — chickens lay eggs carrots sprout from the ground and blackberries hang from elongated branches. But there is something different about this small plot located near the Wilmington International Airport. It is operated in part by an unlikely group of people: lawbreakers.

The men and women who work the farm have completed their debt to society and now are residents of the M.E. Roberts Transitional Living Facility. There they are required to spend the first 60 days of their stay planting weeding and harvesting in the one-fourth-acre plot’s many beds learning lessons that will help them in the process of successfully transitioning from prison to civilian life.

“In the Scripture it talks about sowing and reaping ” says Frankie Roberts cofounder of the nonprofit that operates the facility. “That particular parable talks about understanding when you are sowing seeds that the birds are going to get some the sun is going to scorch some and some is going to fall on thorny ground. But some grew. Some 30-fold some 60-fold some 100. That’s how the farm operates. Same principle. It teaches you planning it teaches you preparation. All of the pieces that the farm teaches you — if you practice those things in life you will be successful.”

The farm and the living facility are part of Leading Into New Communities Inc. (LINC) a nonprofit organization Roberts a Wilmington native cofounded in 2000.

His passion for the project stemmed from his relationship with his brother Marvin who died in 1998. Marvin nearly 17 years older than Frankie became addicted to heroin while serving in Vietnam. Following his two tours Marvin was in and out of prison after returning home.

“Over time I became bitter and unforgiving ” Roberts says. “I used to have to go to visitation and became more bitter. I had to give up a weekend day. I had this awakening in 1998. God showed me if it wasn’t for His grace that could have been me. On my way to apologize he passed away. This organization was born out of that experience. That’s how we got here.”

While incarcerated Marvin Roberts died unexpectedly at the age of 49 after a minor surgical procedure. Two years later Frankie Roberts and Tracey Ray established LINC dedicated to serving the needs of men and women returning from prison to everyday life.

Roberts wanted to institute a positive hardworking environment that benefited both those transitioning from prison and the residents of his city. From this desire the idea for the urban farm was born.

“The law of the farm — it operates on the principles of life ” Roberts says. “That’s what planted the seed for us to use the farm as our model.”

The farm was officially established in 2012 when LINC acquired three-fourths of an acre for the living facility and offices in the north side of Wilmington on Division Drive. It packs a lot of produce into a small space. In fact the lack of acreage gives the farm an intimate modest feel that adds to its uniqueness.

“I’ve been an artist for 40 years ” he says. “I have my artist self and my garden self. I get to be here four hours a day. I love it. It’s pretty amazing.”

Although Van Hout did not have any previous farm experience he enthusiastically embraced his managerial role. Most days he gets in the dirt himself planting weeding and aiding the residents in their own work.

“I’m learning ” he says. “It’s been two years this July. I learn something new every year.”

One thing he learned was how to make compost which is needed to enrich the sandy soil. The primary ingredient is manure shoveled from the farm’s chicken coop. It’s used to grow an array of fruit and vegetables including blackberries watermelon cantaloupes carrots kale beets tomatoes and cucumbers.

Van Hout also learned how to tap into the farm-to-table movement. Roberts credits him with getting food from the urban farm onto the plates in some of the best restaurants in town including Pembroke’s Rx and Spoonfed Kitchen and Bake Shop.

“I can go to almost any restaurant and they’re excited to take it ” Van Hout says. “They place an order and I bring it. It has been picked that day and it’s on their menu that night.”

It is possible for individuals to buy eggs or honey from the farm’s chickens and bees as well. Michelle Gunn operations director of LINC Inc. says fresh food is just a phone call away. Customers can call or e-mail LINC and pick up their order within a few days.

And there is always something available for individuals who just show up at the farm Roberts says “even if it is nothing but a good story.”

The facility can accommodate up to 40 residents at a time and Roberts says about 100 men and women come through every year. The average length of stay is six months.

“The farm has taken the edge off our sometimes-unattractive mission ” Roberts says. “That has been our struggle to not be viewed as an organization that helps so-called criminals. Since we’ve been farming people don’t necessarily say that as much. They look at us more like farmers. It’s also helped our residents eat healthier because this is a food desert. And it allows us to bring in program income.”

For many of the residents the LINC Urban Farm represents a second chance — a way to begin anew. John Blackwelder a current resident says the farm has been successful in its goal of helping former prisoners.

“We have internet cable food ” he says. “I mean it’s just a comfortable place to stay. And when you get out of prison it’s somewhere to go where you don’t have to immediately try to jump back into all of the responsibilities that you would normally have. So it kind of gives you a chance to work on the things that you need to get done.”

LINC has helped reintegrate 1 200 people into the community since 2002. Roberts says 92 percent have remained out of prison. The farm is a big part of that success.