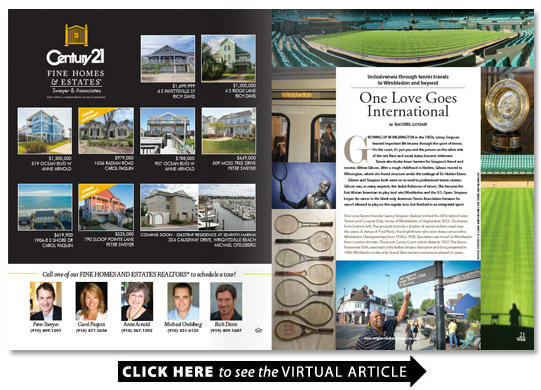 Growing up in Wilmington in the 1950s Lenny Simpson learned important life lessons through the sport of tennis. On the court it’s just you and the person on the other side of the net. Race and social status become irrelevant.

Tennis also broke down barriers for Simpson’s friend and mentor Althea Gibson. After a rough childhood in Harlem Gibson moved to Wilmington where she found structure under the tutelage of Dr. Hubert Eaton.

Gibson and Simpson both went on to excel in professional tennis careers. Gibson was in many respects the Jackie Robinson of tennis. She became the first African American to play (and win) Wimbledon and the U.S. Open. Simpson began his career in the black-only American Tennis Association because he wasn’t allowed to play on the regular tour but finished in an integrated sport.

Simpson’s experiences led him to found One Love Tennis when he returned to Wilmington in 2013. He wanted kids — especially at-risk kids — to learn the same lessons from the sport that he did to know they can overcome obstacles.

“The ages that we like to work with are from 5 years to 15 ” he says. “We want to give them hope just like someone told me at 5 6 7 that you can succeed and do something with your life. We have kids from Landfall and kids from the projects on the same court. All they know is they are both trying to hit a tennis ball and they’re getting to know each other and become friends. They’re learning they’re not different than each other.”

Simpson is taking his message overseas to England and to Israel.

“We now have global partnerships ” he says.

It started last year when Simpson showed the 2015 documentary “Althea” at the All England Lawn Tennis and Croquet Club home of Wimbledon.

It was an uphill battle to show the documentary that details the life of the tennis great — including the discrimination she faced at the All England Club — even with the help of Hampstead resident and One Love backer Jenny Trewby Spruill a native of England who is a former Wimbledon competitor and member of the club. Simpson was persistent believing all things are possible with God.

His persistence paid off and in September 2016 Simpson and a group from Wilmington travelled to England to show the touching documentary to 350 people at the facility where the world-famous tennis tournament is played annually.

“All you could hear was sniffling ” Simpson says describing the atmosphere after showing the documentary. “It was the most moving thing that I have ever seen happen to an audience. It was just an incredible experience.”

Simpson is going back to Wimbledon the first week in July while the tournament is being played to discuss logistics for an October trip when he will show the documentary to schools across the United Kingdom as the first partnership event between the All England Club and One Love.

“I really hope they’re enlightened. I hope they’re inspired that no matter where you are in the world you can be successful no matter what your situation is if you do the right thing and make the right choices ” Simpson says. “I also want them to understand the adversities this black woman went through to get where she was and the realities of what it is to hate. To judge people. To be a sheep. They need to be a leader not a follower.”

The partnership in Israel came about after Simpson and his wife JoAnn took a trip to the Holy Land earlier this year. While there they visited one of the nation’s 15 tennis centers and discovered they shared One Love’s goal of improving children’s lives by breaking barriers with the sport.

“Those tennis centers have Christians Muslims Arabs Polish Jews Russian Jews Ethiopian Jews all living together trying to get better at hitting a tennis ball and succeeding in life ” Simpson says. “Those kids are at-risk kids doing the same thing that we’re doing. The common bond is hitting a daggum tennis ball. And helping those young boys and girls succeed in life together! Christians Muslims Jews Arabs in all these cities. That to me is everything. And that’s the same thing we’re doing right here in ‘lil Wilmington North Carolina.”

One Love’s plans include enacting an exchange program with the kids of the All England Club and One Love and maybe with the Israeli tennis centers.

“[It’s] definitely one of our immediate goals ” Simpson says. “Do this cultural exchange of our kids going to England playing against kids over there and sharing. Kids from England coming here experiencing Wrightsville Beach and Wilmington playing against each other learning about each other finding out what they have in common. That’s what One Love is all about so it fits like a glove.”