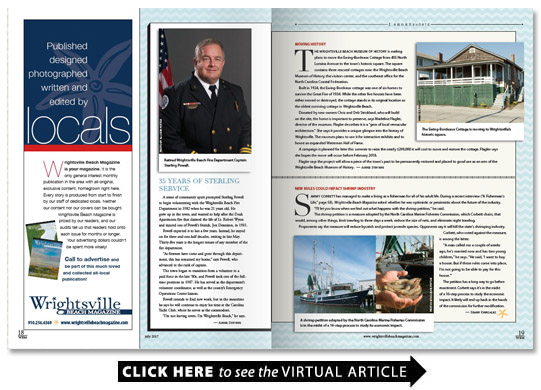 A sense of community spirit prompted Sterling Powell to begin volunteering with the Wrightsville Beach Fire Department in 1982 when he was 21 years old. He grew up in the town and wanted to help after the Doak Apartments fire that claimed the life of Lt. Robert Wynn and injured one of Powell’s friends Jon Dennison in 1981.

Powell expected it to last a few years. Instead he stayed on for three and one-half decades retiring in late May. Thirty-five years is the longest tenure of any member of the fire department.

“As firemen have come and gone through this department this has remained my home ” says Powell who advanced to the rank of captain.

The town began to transition from a volunteer to a paid force in the late ’80s and Powell took one of the full-time positions in 1987. He has served as the department’s volunteer coordinator as well as the county’s Emergency Operations Center liaison.

Powell intends to find new work but in the meantime he says he will continue to enjoy his time at the Carolina Yacht Club where he serves as the commodore.

Built in 1924 the Ewing-Bordeaux cottage was one of six homes to survive the Great Fire of 1934. While the other five houses have been either moved or destroyed the cottage stands in its original location as the oldest surviving cottage in Wrightsville Beach.

Donated by new owners Chris and Deb Strickland who will build on the site the home is important to preserve says Madeline Flagler director of the museum. Flagler describes it is a “gem of local vernacular architecture.” She says it provides a unique glimpse into the history of Wrightsville. The museum plans to use it for interactive exhibits and to house an expanded Waterman Hall of Fame.

A campaign is planned for later this summer to raise the nearly $200 000 it will cost to move and restore the cottage. Flagler says she hopes the move will occur before February 2018.

Flagler says the project will allow a piece of the town’s past to be permanently restored and placed to good use as an arm of the Wrightsville Beach Museum of History.

Sammy Corbett has managed to make a living as a fisherman for all of his adult life. During a recent interview (“A Fisherman’s Life ” page 58) Wrightsville Beach Magazine asked whether he was optimistic or pessimistic about the future of the industry.

“I’ll let you know when we find out what happens with the shrimp petition ” he said.

The shrimp petition is a measure adopted by the North Carolina Marine Fisheries Commission which Corbett chairs that would among other things limit trawling to three days a week reduce the size of nets and eliminate night trawling.

Proponents say the measure will reduce bycatch and protect juvenile species. Opponents say it will kill the state’s shrimping industry.

Corbett who voted against the measure is among the latter.

“A man called me a couple of weeks ago he’s married now and has two young children ” he says. “He said ‘I want to buy a house. But if these rules come into place I’m not going to be able to pay for this house.'”

The petition has a long way to go before enactment. Corbett says it’s in the midst of a 16-step process to study the economic impact. It likely will end up back in the hands of the commission for further modification.