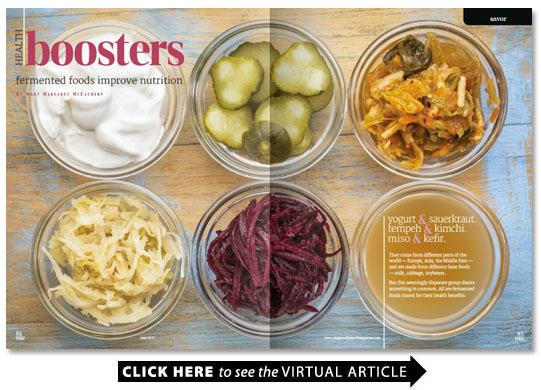 But this seemingly disparate group shares something in common. All are fermented foods touted for their health benefits.

Fermented foods including apple cider vinegar (with “mother”) are created when microorganisms are introduced a process originally intended to preserve and extend the life of food but one that also introduces many nutritional and protective benefits.

Jane A. Steigerwald registered dietician and licensed dietician/nutritionist with the University of North Carolina Wilmington believes in the power of fermented foods.

“As a dietitian I strongly support the inclusion of fermented foods in a balanced diet ” she says. “They are a great source of beneficial enzymes B-vitamins omega-3 acids and probiotics. Depending on your tolerance and preferences non-dairy and dairy are equally beneficial.”

Probiotics are gut-friendly bacteria that help ensure a balanced gastrointestinal tract the importance of which is bearing out in continued research. Regular consumption of fermented foods combats the negative effects of non-steroidal anti-inflammatory medications antibiotics stress and even sports drinks all of which can harm beneficial bacteria and weaken the body’s immune system.

“I personally feel better when I eat fermented foods ” says Amanda Jacobs a Wrightsville Beach endurance athlete who has become a nutrition expert through researching the type of fuel she puts in her body. “It kick-starts your digestive system and it’s clean-eating.”

Fermented dairy products like yogurt are unique in that they contain both prebiotics and probiotics. Prebiotics provide special carbohydrates that are not digestible by the human body but provide nourishment to probiotics gut-friendly bacteria.

Yogurt an ancient food that has leapt in popularity in the United States is far more familiar to Americans than some of its more exotic relatives. It’s produced by the bacterial fermentation of milk via yogurt cultures. Strained yogurt sold as Greek yogurt has grown in popularity over the last several years. The straining process removes the whey giving the yogurt a creamier thicker consistency than unstrained varieties. Plain non-fat Greek yogurt makes an excellent substitute for sour cream on a baked potato.

Fermentation endows yogurt with a sourness that is often combatted commercially by the introduction of sweeteners. While most popular commercial yogurt brands are sold as nonfat they typically include sugar and artificial ingredients. Nutrition experts advise consumers to remain vigilant and check labels. Seek products with fewer than 10 grams of sugar and recognizable ingredients even if they contain fat.

Skyr (pronounced “skeer”) is a cultured dairy product consumed in Iceland for more than 1 000 years. It has the consistency of strainedyogurtbut a much milder flavor and is becoming increasingly available in higher-end supermarkets. It has fewer ingredients and far less sugar than mainstream yogurts. In addition to its prebiotic and probiotic content it contains as much calcium and protein as Greek yogurt.

Kefir is a yogurt-like fermented milk drink originating in the North Caucasus region of Russia. Fermentation occurs from introducing yeast-containing kefir grains into cow goat or sheep milk. It has been dubbed a “drinkable” yogurt and provides many of the same nutrients amino acids and probiotics found in other fermented foods. Available at specialty natural foods stores frozen kefir makes an excellent nutritious ice cream substitute.

Endurance athlete Tom Clifford founder and head coach of Without Limits Coaching and founder and director of the Wrightsville Beach Marathon makes his own kefir.

“The fermentation process takes only about 24 hours ” he says. “The finished product tastes like plain Greek yogurt. When my family even my toddler daughter eat kefir we just don’t get sick.”

Kefir requires only two ingredients: kefir grains and about four cups of milk. Clifford recommends adding about one teaspoon of kefir grains to the milk. Once it has fermented simply strain and it’s ready to eat.

Kefir grains are available online and locally and like yeast they can be cultivated and grown after initial acquisition.

Jacobs is a vegetarian and doesn’t consume dairy. She introduces kefir grains to water creating a fizzy beverage.

“Everyone can make their own water kefir ” she says. “It’s super simple and you get a fresh batch every two days. You can flavor it with natural fruits and it is essentially club soda-like but with so many benefits to our gut.”

Other fermented foods include tempeh miso kimchi sauerkraut and kombucha. These foods have rich histories in various cultures around the world.

Tempeh a product originating from Indonesia is made by fermenting soybeans into cake form. While made from soybeans fermentation creates a nutritional profile that differs markedly from tofu. High in protein fiber and vitamins tempeh serves as an effective meat substitute and fermentation allows the body to more easily digest and absorb the beneficial carbohydrates and minerals found in soy.

Miso a traditional Japanese seasoning is produced by fermenting soybeans with salt and a fungus called koji. It is high in protein vitamins and minerals. Miso is often incorporated in soups and like other fermented products is high in beneficial probiotic bacteria.

During World War II millions of Japanese civilians in Nagasaki were said to be protected from radiation poisoning from an atomic bomb dropped by the United States because miso was a regular part of their diet. A 2013 study published in Toxicologic Pathology found that miso gains its radioprotective qualities from the bacteria produced during the fermentation stage.

Jacobs and her family enjoy miso at least two to three times a week.

“You can buy a tub of miso for almost nothing ” she says. “One pot of miso when combined with vegetables can last a whole week.”

Popular in Eastern European and Germany throughout history sauerkraut is simple. It is finely cut cabbage fermented with lactic acid bacteria. Fermentation imbues it with a distinctive tangy flavor and long shelf life. It is popular in the United States as a side dish and is often used to garnish hot dogs.

Sauerkraut is low in calories and nutrient-dense; the cabbage alone is full of nutrients that are made bioavailable — the ease with which a nutrient can make its way from the food you eat into your system — through fermentation.

Kimchi made from fermented cabbage originates from Korea. It’s low in calories high in fiber and loaded with beneficial probiotic bacteria.

Wilmington native Napier Fuller learned about kimchi in his travels and now he loves it.

“I’ve traveled to South Korea several times developing a love of kimchi ” he says. “Traditionally eaten as an appetizer kimchi helps one to better digest rice a staple of any Asian meal.”

Kombucha a traditional oriental beverage dating back 300 years is made from fermenting black tea. Fermentation occurs by introducing a symbiotic culture of bacteria and yeast.

Some controversy surrounds the drink because of the risk for unhealthy bacteria from unpasteurized kombucha prepared in non-sterile conditions. But proponents tout its antioxidants amino acids organic acids enzymes B-vitamins gluconic acid and glucuronic acid.

Drinking around 12 to 24 ounces per week (modern consumers should note that one bottle from the grocery store is typically 16 ounces enough for multiple servings) encourages a balanced gut biome that can aid runners and other exercisers prone to GI problems during workouts. Its light effervescence can effectively calm an upset stomach.

Local runner and triathlete Lesly Jurado rewards herself with kombucha after her tough workouts.

“Kombucha is just a refreshing healthy treat ” she says.

“I love skyr and kefir ” she says. “I have one or the other before my early-morning workouts. I can consume more protein and calories quickly and feel great during my training.”

“I indulge in pickles and pickle juice during my long bike rides ” she says. “This really helps relieve and prevent cramping and it quenches thirst too!”

“Variety is key as all the fermented foods carry different strains of probiotics that seem to each elicit a different benefit ” she says. “My personal favorite is implementing kefir as a smoothie base. It’s a great option for athletes looking to optimize recovery post-workout with its carbohydrate and protein combo alongside potential immune bolstering probiotics.”

Because fermented foods improve the body’s ability to nourish itself they form a good part of a healthy regime.

Randee Nolan Bulla of Wilmington has experienced a transformation since she began eating fermented foods.

“I started eating fermented foods taking probiotics and eating prebiotics in December and it’s made a major positive difference in how I feel ” she says.

Mueller cautions that while they are a great addition to a healthy balanced diet fermented foods are not a cure-all.

“Fermented foods are quite trendy right now so I think as with anything trendy be mindful that while there may be some positives in incorporating some into a daily diet consuming too much may backfire ” she says. “Everyone is likely to respond a little differently. Some especially those not accustomed to eating foods naturally containing probiotics may experience gas bloating and other GI discomfort with consumption of fermented foods early on.”

Still Jacobs is a believer.

“I have not come across any undesirable effects of fermented foods ” she says. “They work really well with my body. As with anything new I would recommend adding them slowly into one’s diet but I feel like these types of food are clean simple and packed full of nutrients.”