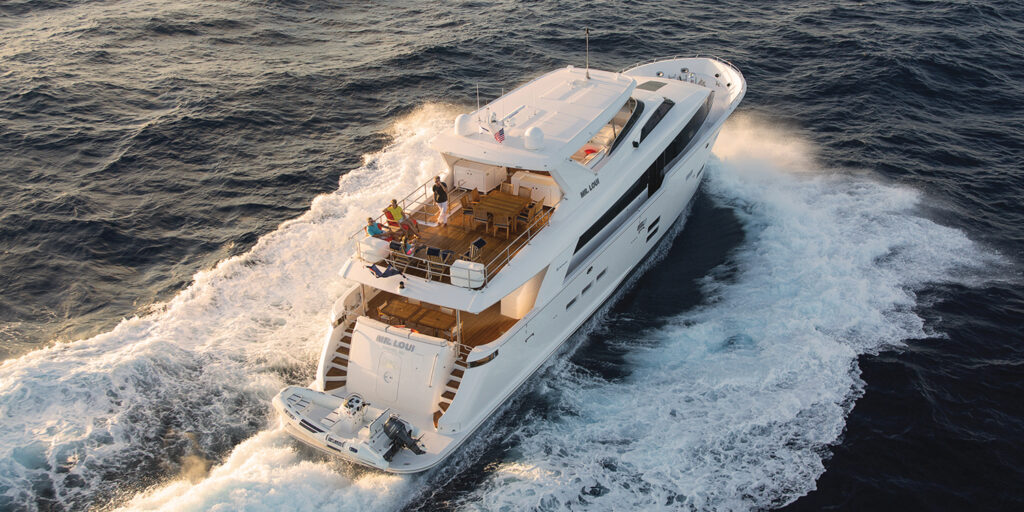 The Hatteras 100-foot motor yacht with raised pilot house is the top-of-the-line flagship design for the next generation of motor yachts built in New Bern, North Carolina. Courtesy of Hatteras Yachts

Originally published in the May 2015 issue of  Wrightsville Beach Magazine.

Early on, boats were built on and near Roanoke Island for sport fishing off the North Carolina Outer Banks, and their designs were honed through trial and error. These boats had to  navigate the chop of the bank’s Oregon Inlet and cut through the ocean swell to reach the Gulf Stream, where marlin and other gamefish were most likely to be found. Warren O’Neal designed a deep-V fishing boat in 1959, and those who learned from him, including Omie Tillett, Sheldon Midgett and Buddy Davis, began building boats in earnest in the ’60s.

The state’s biggest yacht builder Hatteras Yachts got its start in an unlikely place — hours from the ocean. Its boats were built to fish. The first Hatteras, a 41-footer named Knit Wits, was designed in 1959 and launched in Morehead in 1960 by Willis Slane. He figured the reduced overhead from not being on waterfront property, along with the ready availability of talented woodworking craftsmen from the furniture industry, would offset the cost of transporting finished boats to the coast, says his son, Tom Slane.

“They had to take out a wall to get that first boat out of the building,” Slane says. “My mom was there in Morehead to break the bottle of champagne over the bow.”

Slane was only 10 when his father passed, and Hatteras Yachts was sold soon after. But years later, after he restored an older Hatteras for himself, another owner of the same model was impressed enough to order his own restoration. Hatteras took note as well, and featured Slane’s projects in its newsletter, which generated more restoration work.

Through decades of rebuilding classic yachts, designing and building a boat of his own was always a thought in the back of his mind, Slane Marine began using space in the High Point facilities used by Hatteras until 1998, when it consolidated its operations into its New Bern headquarters.

Jarrett Bay’s Randy Ramsey has a similar story about the origins of his business. He was charter fishing in the 1980s when he set out to build a boat of his own.

“I always knew that I wanted to do something different, something a little more stylish, and what I thought would be better in the ocean for charter fishing,” he says. “I turned to a guy I’d fished with named Omie Tillett. Like me, he was a charter captain who made his living on the ocean, and he was always trying to change his boats and make them a little better. So when I got ready to build my first boat, I reached out to him to try to build a boat that was very similar to the one that he was running. We built Sensation, which was our first boat, and is still operating on the Morehead City waterfront, charter fishing every day. He helped us and made a big impact on how our boats are.”

While building Sensation, another charter captain asked Ramsey to build a second boat. He agreed to work on that next boat — when he wasn’t fishing. Those two led to more orders, and by the early ’90s, he had to drop charter fishing and focus full-time on boat building to keep up.

When Gunboat founder and CEO Peter Johnstone was looking for a place to build boats, North Carolina’s central location on the Atlantic coast, the availability of facilities suitable for large yacht production, and a labor force with a history of boat building and woodworking were major factors in the company’s move to Wanchese in 2012. The state provided an incentive package that included rehabilitation of the former Buddy Davis Boatworks and the construction of an access ramp wide enough to accommodate the company’s catamarans.

“We have some incredibly talented woodworkers here, some with long boat building backgrounds, some with custom furniture backgrounds, who bring some unique and varied skillsets on the woodworking side,” Brodie says.

One trend that stands out is yachts are getting bigger, and each builder has larger offerings than ever before. As customers demand more accommodations, more speed and more range, hull lengths that were once unheard of are continually more common. It wasn’t long ago that the ideal length for a cruising sailboat, motor yacht or sport fisher was in the mid-30-foot range.

“When I was charter boating back in the ’80s, people used to say the ideal sized boat was a 37-footer,” Ramsey says. “You could get around it, fish better, handle better, and anything larger than that was difficult. And at that point that probably was the case. But now we’re seeing boats that, with the advent of additional horsepower, are very efficient, and handle really well. At that point there were 250-horsepower gasoline motors in the boats, and now we’re seeing boats with 2,600 horsepower per side. So that, along with the bow thrusters, make the boats very nimble in larger sizes. Having boats in those larger sizes makes the world smaller and allows us to go and do really cool stuff.”

During and following the recession, Brodie adds, the larger boats have been the market segment that still showed growth, which led Pacific Seacraft to expand its size range upward.

With longer hulls, better navigation technology and weather forecasting, and more reliable propulsion systems, yachts are traveling farther, and customers from around the globe are seeking out those built in North Carolina.

“When you go to marinas, you just see numerous examples of the past,” Angel says. “You see 53 motor yachts, you see the 90 convertible. I got to see the 125-foot triple screw boat that we built. Our exposure is worldwide — we’ve got lots of boats in Australia, Japan and the Mediterranean. It’s a humbling experience, and it makes you very proud to see these products that are out there and still floating.”

With yachts built in North Carolina floating in ports around the world, the state’s boat builders have a strong legacy to build upon, and a high bar for which to strive. To continue to survive, they will have to continue to adapt and innovate; seeking ever more efficient designs, systems and construction techniques, as the level of competition constantly rises. Above all else, they must build boats that can withstand the whims of the cruelest mistress, the sea.