Sounding and charting the Atlantic coastline 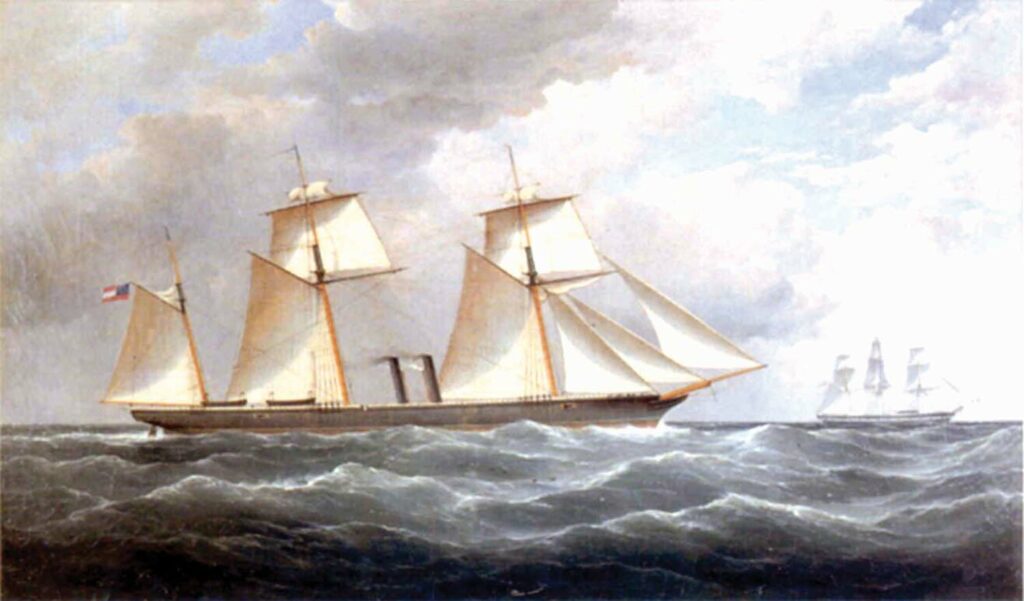 Capt. John Newland Maffitt is best known as commander of the Confederate commerce raider Florida during its first and most successful cruise in 1863.

Originally published in the February 2009 issue of Wrightsville Beach Magazine.

If John Newland Maffitt did not have saltwater in his veins, he should have. Born at sea, he spent much of his life on the ocean as an officer in both the United States Navy and the Confederate States Navy, and as a successful blockade running captain in the Civil War. His life and adventures are the stuff of legends.

Ann Carnick was more than eight months pregnant when she and her husband, Rev. John Newland Maffitt Sr., a Methodist minister, embarked from Ireland, bound for America in the winter of 1819. She gave birth to a boy, whom they named for his father, in the middle of the Atlantic Ocean on February 22. Later in life, Maffitt, with his usual knack for wit and humor, claimed that the exact location of his birth was 40 degrees west longitude, and 50 degrees north latitude.

Soon after making landfall in New York, the Maffitts moved to New England, where young John lived the first five years of his life. But he spent several happy boyhood years at Ellerslie, the plantation home of an uncle, Dr. William Maffitt, near Fayetteville, North Carolina, as well. It was a Southern exposure that would greatly influence his life.

Dr. Maffitt, who had accompanied his brother’s family to America in 1819, adopted young John when his mother and father separated in 1824. Maffitt’s friendliness and kindness led him to establish lifelong friendships while growing up in Southeastern North Carolina, including those of future Confederate naval officers James W. Cooke and James Iredell Waddell. Maffitt’s boyhood companions considered him a natural born leader.

Maffitt was sent to school at White Plains Academy in New York for a few years, but accepted President Andrew Jackson’s appointment as a midshipman in the U.S. Navy in 1832. He was just 13 when he was assigned to the sloop-of-war St. Louis, which saw duty in the Caribbean. Maffitt then served on board the famed War of 1812 frigate USS Constitution, popularly known as Old Ironsides. The Constitution’s new assignment was an extended cruise of more than three years as the flagship of the U.S. Navy’s Mediterranean Squadron. During a stopover in Athens in 1837, Midshipman Maffitt was assigned the duty of escorting King Otho and Queen Amalie of Greece on board the ship, and even danced with the young queen on the quarterdeck during the captain’s ball.

From 1842 until 1858, Maffitt, now promoted to lieutenant, helped sound and chart the Atlantic coastline and harbor entrances from Massachusetts to Florida for the U.S. Coast Survey. He chiefly surveyed Nantucket, Massachusetts, Wilmington, Charleston and Savannah, establishing himself as an excellent, indispensable naval officer.

“He is not only a thorough seaman and game to the backbone, but a man of superior intellect, a humorist of rare excellence, and one of the most delightful companions,” stated A.D. Bache, superintendent of the U.S. Coast Survey. “There is no position in his profession which Maffitt is not capable of filling with honor and distinction.” A channel in Charleston’s harbor still bears Maffitt’s name.

It was during his service with the  Coast Survey that Maffitt became acquainted with the Lower Cape Fear.  In the early 1850s, Maffitt and his hydrographic party of the USS Gallatin were headquartered at Fort Johnston in  Smithville (now Southport), near the mouth of the Cape Fear River. Smithville, a pleasant fishing village and summer resort for wealthy residents of Wilmington, 26 miles upriver, provided Maffitt with many pleasurable experiences.

Extremely popular wherever he went, Maffitt was a frequent guest at parties, picnics and cotillions. He was often entertained at Orton Plantation, Dr. Frederick J. Hill’s palatial rice plantation 11 miles from Smithville on the Cape Fear River. Maffitt also organized a theater troupe in Smithville, and produced and performed in plays.

While temporarily stationed in Charleston in the summer of 1852, Maffitt met and married Caroline Laurens Read, from a prominent Palmetto State family. It was the second union for each of them. Caroline was the widow of the late James W. Read of the U.S. Navy. Maffitt’s first marriage to Mary Florence Murrell of Mobile, Alabama, in 1840, had ended unhappily and mysteriously, after only four years. Nevertheless, the unfortunate relationship produced two children: Mary Florence, whom Maffitt endearingly called “Florie,” and Eugene Anderson.

Maffitt was consoled, at least in part, by a sailor’s alluring mistress — the sea. From 1858 to 1861, Maffitt held two commands — the USS Dolphin and USS Crusader — searching for slave smugglers in the West Indies. The United States had outlawed international slave trading in 1808.

With the outbreak of the Civil War in mid-April 1861, Maffitt, like all Southern born or bred U.S. military personnel, faced a dilemma: Should he remain in service to the United States or return to the South, where his family and his heart resided? As did most Southerners at the time, Maffitt identified himself with his home region. He agonizingly made the decision to go south, submitting his letter of resignation to the U.S. Navy Department on April 28, 1861, which was officially accepted four days later. Fearing that he might be arrested for treason, however, Maffitt slipped out of Washington D.C. — leaving his property and possessions behind — and headed for Montgomery, Alabama, the first capital of the nascent Confederate States of America.

The Confederate government appointed Maffitt a lieutenant in the Confederate States Navy, effective May 8, 1861. One of his first duties was as the naval aide to General Robert E. Lee, preparing defenses and water obstructions in the Department of South Carolina, Georgia, and Florida.

Promoted to captain in early January 1862, Maffitt was placed in command of the steamship Cecile with instructions to smuggle European supplies through the Union naval blockade of Southern seaports. Captain Maffitt made several runs from Nassau to Wilmington on board the Cecile and then the blockade runner Nassau, bringing in vital military arms and equipment for the Confederacy in 1862.

Due to his success as a blockade running sea captain, the Confederate navy offered Maffitt a command opportunity that would ultimately secure his place in the annals of naval history. On August 17, 1862, he became the first commander of the famed commerce raider CSS Florida.The ironhulled, sloop-rigged, two-funneled, 191-foot long steamer of 700 tons was built as the Oreto by William C. Miller & Sons of Liverpool, England, ostensibly as an Italian merchantman. She was eventually purchased by the Confederate government to serve as a commerce raider.Lacking a conventional navy, the Confederacy deployed commerce raiders to prey on Union merchant vessels on the high seas. The most famous Confederate raider was the CSS Alabama, which captured 67 prize vessels valued at more than $6 million — more than $80 million today — before being sunk in a dramatic sea battle against the USS Kearsarge off Cherbourg, France in June 1864.

The second most successful Confederate commerce raider during the war was the CSS Florida.

As Maffitt outfitted his new command, yellow fever raged on board, reducing the effective crew to only a few sailors. The virus even struck Captain Maffitt. In his fevered condition, and against all odds, the intrepid seaman successfully ran the Florida through a hail of cannon fire from Union blockading gunboats at Mobile in early September 1862, a feat that earned him great praise and admiration throughout the Confederacy.

Maffitt and his crewmen spent the next several months in Mobile, recovering from their illnesses and taking on additional sailors, artillery and provisions. Finally, in mid-January 1863, Maffitt, with the Florida, escaped through the blockade to sea. In the following six months, the raider created havoc for Union commerce, taking 22 prizes in the West Indies and North Atlantic. For “gallant and meritorious conduct in command of the steam sloop Florida,” the Confederate Navy Department promoted Maffitt to commander in May 1863.

All the while, Federal gunboats pursued but failed to catch Maffitt and the Florida. In late August 1863, Maffitt put into Brest, France to make repairs on his ship. His health compromised by the lingering effects of yellow fever, however, Maffitt relinquished command of the Florida and repaired to England. The Florida subsequently embarked on a second, less successful cruise that ended with her capture by a Union warship off Brazil in early October 1864.

In the autumn of 1863, Maffitt assumed command of the blockade runner Florie, named for his adventurous daughter. Early the following year, he took command of the blockade runner Lilian (sometimes referred to as the Lillian), operating between Wilmington and Bermuda. Then, in late June 1864, the Confederate navy sent Maffitt to command the CSS Albemarle, the famous ironclad titan that guarded Plymouth, North Carolina, on the Roanoke River.

Commander Maffitt spent the last six months of the war in command of the blockade runner Owl, based out of Wilmington, the Confederacy’s last major seaport open to trade with the outside world. The Owl was the last blockade runner to escape Federal forces that captured Fort Fisher and the Cape Fear estuary in mid-January 1865. Unwilling to surrender his last command at war’s end, however, Maffitt sailed the Owl to Liverpool, where she had been built. There he dismissed his crew from duty in late July 1865, four months after the Civil War ended.

In the fall of 1865, Maffitt accepted command of the British merchant vessel Widgeon, on which he served for 18 months. At the urging of his family, he resigned his commission in 1867 and returned to Wilmington. Using money he earned in the British merchant marine, Maffitt bought a 212-acre farm, which he named the “Moorings,” along Bradley Creek near Wrightsville Sound. Widowed from his second wife since before the war, Maffitt married Emma Martin of Wilmington in November 1870. Strangely, two years earlier, Maffitt’s son, Eugene Anderson Maffitt, had married Kate Martin, Emma’s sister, now making father and son also brothers-in-law.

John Newland Maffitt spent most of his final years at the Moorings as a family man and gentleman farmer, and writing about his seafaring adventures. He died on May 15, 1886.

“Of Captain [Maffitt] himself,” wrote an English reporter who visited on board the CSS Florida in 1863, “I may say that he is a slight, middle-sized, well-knit man, a merry looking man with a ready, determined air, full of life and business — apparently the sort of man who is equally ready for a fight or a jollification, and whose preference for the latter would by no means interfere with his credible conduct for the former.”