The Jeremy Owens Training Facility is dedicated in Wrightsville Beach 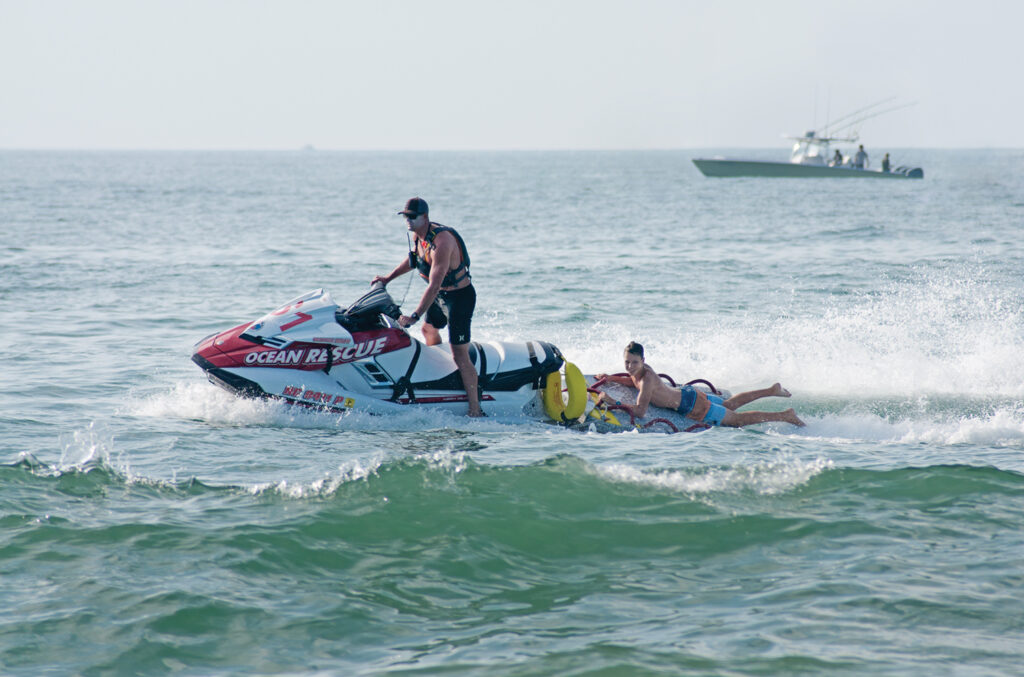 The gym was begun in 2020 after Owens’ passing and dedicated in 2022 to his memory and for his 17 years of service to the community.

One often repeated story occurred in 2010 on a weekend when there was a hurricane swell offshore. Twenty-one swimmers were caught in the treacherous rip current spawned by the storm. As they were pulled out to sea, Ocean Rescue guards swam to the outskirts of the rip. Owens, on a Jet Ski, grabbed those 21 swimmers one by one and spun them off to the nearest guard who brought them back to shore.

It is an epic day in guard history.

“Two hundred and twelve people [rescued] in one day, with one rip pulling 21. No loss of life,” says Ocean Rescue Director Dave Baker.

The dedication ceremony recognized and thanked everyone involved in helping bring the public safety gym to fruition.

“As a family, we are all very excited by the dedication,” says Debbie Owens, Jeremy’s mother.

Owens was known as a true waterman — a sailor, surfer, swimmer, diver and lifeguard. His parents met on Wrightsville Beach and also worked as lifeguards. He was a big brother not only to his two siblings but inarguably to the entire town. It is widely believed Owens’s 6-foot-4, 220-pound stature correlated with the size of his heart.

Owens created the wildly popular Junior Lifeguard program, developed techniques and protocols that saved lives, and broke his own Fireman’s Challenge record. He received the U.S. Lifeguard Association’s national award for commitment and dedication to public safety and education. In addition, he founded Evolution Mixed Martial Arts, where he trained Ultimate Fighting Championship fighter Derek Brunson. He also worked as a film stuntman.

The training facility serves as a joint fitness facility for all Wrightsville Beach public safety employees.

“The Captain Jeremy Owens Public Safety Training Facility was created in honor of Jeremy and his love of fitness,” says Ocean Rescue Captain, paramedic and firefighter Sam Proffitt (also Jeremy’s best friend). “The project was led by Dr. Wayland Tseh and his team from University of North Carolina at Wilmington. Funding was obtained by donations to a GoFundMe site created [June 2021] by Dr. Tseh, grants obtained by UNCW, and donations from the community.”

Owens’s family says funding was also raised by individuals, family members and fire departments from around the country, and donations to the volunteer firefighters association earmarked to the Owens memorial.  A not-for-profit WB Foundation casino night in March 2022 raised money. A live auction at Jimmy’s on the night of his paddle-out in June 2021 raised $25,000. At that time Owens’s Ocean Rescue number 81 was retired and lifeguard stand no. 8 dedicated in his honor.

“There needs to be more awareness of mental health, and PTSD,” his mother says. “Healthy brains and healthy bodies lead to wellness. Our focus needs to be on mental wellness, as well as providing a space that they can think of as a safe space to continue to work on their physical wellness, their mental wellness, and to be able to talk about many of their struggles without any judgments or stigma attached to it.”

She says her son didn’t feel he could reach out to get help. She hopes part of his legacy is that it is okay to talk about things and get well.

“He would want people to know they should go and talk about it,” she says. “He didn’t feel like he could talk about it. I hope the goal will be to provide a venue for first responders to be able to continue to work on their wellness.”

“The things we hear when we’re working on people — screaming and yelling and crying — those things carry with you,” he says. “Jeremy and I made some really gnarly recoveries over the years I would never want anyone else to experience. Those things compile. Some take forever to get over.”

To Write Love on Her Arms

(locals meeting by Zoom once a month) www.touchedbysuicidenc.weebly.com

See the January 2018 issue of Wrightsville Beach Magazine for an in-depth roundtable discussion of how suicide has touched our community.