John Carey Awarded The Order of the Long Leaf Pine 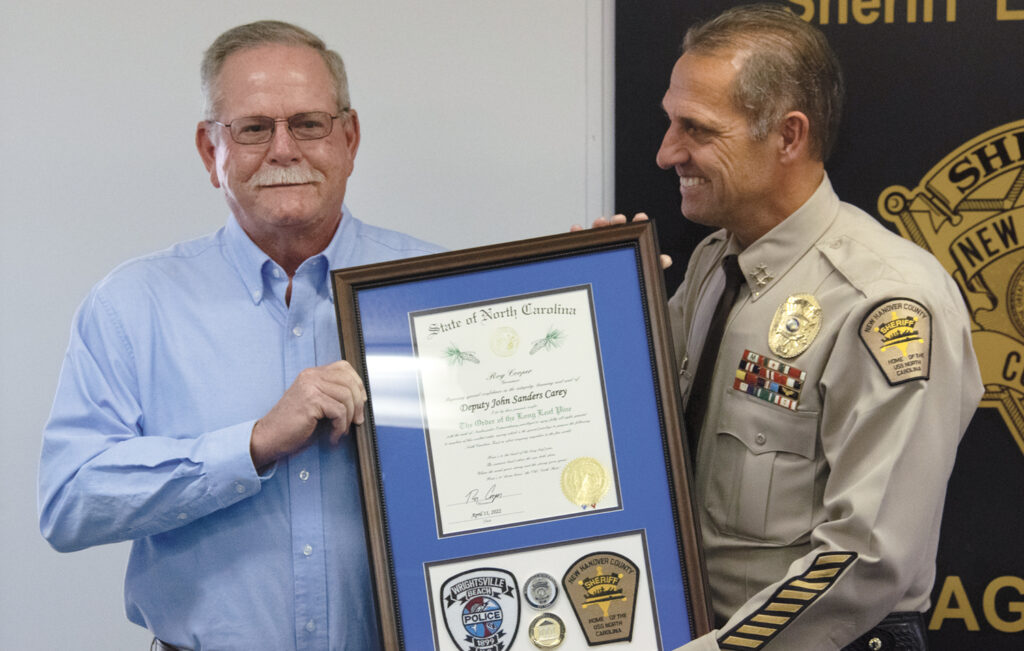 The Office of the Governor grants awards to individuals or groups in North Carolina to recognize exemplary service. The Order of the Long Leaf Pine, created in 1963, is the highest award granted for state service.

The award was unexpected. “When I received it, it was a complete surprise,” he says.

Carey retired in March 2011 after 30 years at the Wrightsville Beach Police Department. An avid marksman, he began to earnestly teach firearms training at that time, although he had conducted classes since the 1980s. Carey joined the New Hanover County Sheriff’s Office as a special deputy in 2013, working as a firearms instructor for the sheriff’s office and Cape Fear Community College Basic Law Enforcement training at the Alvin Page Range, off US 421N in Wilmington.

Carey and Lt. Lloyd R. Narramore served as acting Wrightsville Beach co-chiefs between 2000 and 2001 while the selection process for a new chief was conducted. Carey, who was hired as a police officer in 1982, won appointment to the chief’s position in 2001.

The Wrightsville Beach Police Department credits Carey as being instrumental in several initiatives, including a leading role in the town’s planning and development of the Public Safety Complex completed in the summer of 2010. He was responsible for transitioning the department from an in-house emergency dispatch system to New Hanover County 911 Central Dispatch and 800 MHz radio system. He implemented the first mobile data terminals in the town’s police cars, as well as in-car video systems and interfaced radar units. He conducted initial testing and evaluation with personal body cameras and implemented the department’s use of Electronic Controlled Weapons (stun guns).

He was pivotal in the move of ocean rescue from the police department into the fire department where they could expand their rescue capabilities. Carey was the first to authorize a police marine vessel to patrol the waters around Wrightsville Beach.

“I was fortunate enough to be hired to be the chief at the time to make those changes. I always felt like when I presented my case and had the facts to support it, they said yes. We had good boards, good mayors who were receptive to making the changes,” Carey says.

All North Carolinians, including state employees with 30 or more years of service, are eligible for the award.

According to the society’s website, “the honoree receives a certificate by which the Governor confers upon the recipient … the rank of Ambassador Extraordinary privileged to enjoy fully all rights granted to members of this exalted order, among which is the special privilege to propose the following North Carolina Toast in select company anywhere in the free world:

‘Here’s to the land of the long leaf pine, The summer land where the sun doth shine, Where the weak grow strong and the strong grow great, Here’s to “down home”, The Old North State!”