Return of the Carolina Cougar

Is the big cat extinct? Not according to reported local sightings. 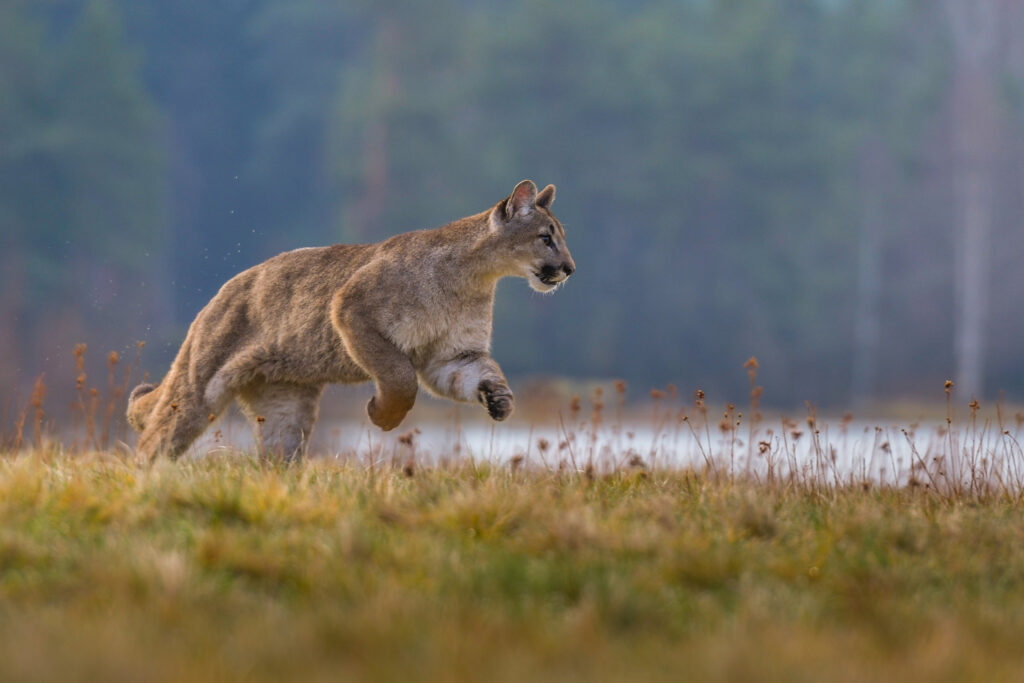 It was just another day for Don Cook and Steve Parrish, scientists at the Brunswick Nuclear Plant’s biology lab near Southport. They were in a company truck, returning from the boat harbor with marine samples, when suddenly they were met with something entirely unexpected. From the dense forest ahead, a huge cat streaked from the wood’s edge and leaped in one great stride across the road in front of their truck.

“It was a large, tan cat with a long tail, crouched low as if stalking, crossing the road from left to right just in front of us,” Cook says. “I distinctly remember seeing the shoulder muscles ripple as it leapt off toward the discharge canal of the plant. I’ve seen plenty of bobcats, deer, bear, and coyotes, but what we saw that afternoon was a cougar.”

They’re called panthers, pumas, painters and cougars depending on who you talk to, and they are extinct in North Carolina. But wait, are they really gone? Not according to a number of North Carolina veteran outdoorsmen, like Cook and Parrish, who each year attest to seeing the big cats.

Wildlife biologists say that these reports can be attributed to mistaken identity — someone perhaps seeing a large bobcat. Just a minute, say people who have seen a cougar. Unlike our native bobcats that on average weigh 20 pounds and have short “bobbed” tails, adult cougars are unmistakably large cats some 6 feet in length and weighing up to 200 pounds. Outdoorsmen like Cook say it would be impossible to mistake a panther for a bobcat or other animal because its tail and elongated body make it radically different in appearance.

In his book Panthers of the Coastal Plains, published in 1994, Charles R. “Buster” Humphries recorded 167 sighting of panthers in a 40-mile range of Wilmington. Could 167 people all be mistaken?

Still, biologists say sightings of the Eastern cougar, known locally as the Carolina Cougar, have not been officially documented in more than 100 years. As a result, the U.S. Fish and Wildlife Service declared it extinct. And so, the native big cat that once roamed North Carolina is no more, right? Well, not exactly.

It is true that while reports of large cats across North Carolina are common each year, little physical evidence exists to confirm most of the accounts.

That all changed some years ago when Dr. Ben Smith Sr., noted Wilmington dentist, oral surgeon, and veteran outdoorsman, not only saw a cougar on his farm in a remote area of Leland near the Cape Fear River, but then made an impression of its pugmark (in this case its rear paw print) to prove what he saw was real. For the first time there was credible, reliable, physical evidence that at least one big cat was back.

How do skeptical biologists explain away the pugmark? They can’t. What they say is there can be no survivors of the original Carolina Cougar, but they do at least buy into the idea that big cats could roam into North Carolina from a neighboring state.

Since September 2015, the Tennessee Wildlife Resources Agency has multiple sightings of cougars listed on its website. Each is vetted and confirmed with a trail camera photo.

In Virginia, there were so many cougar sightings that citizens started a research site, Cougar Quest Virginia, to document sightings with observations, research and photos. The published findings led them to believe that cougars live in and traverse though Virginia and nearby states.

In a recent report, South Carolina resident and historian Dr. Tom Horton, while driving along U.S. 341 an hour before sunset near the intersection of Winterhaven Road one mile east of Kershaw, saw what he described as a large cat crossing the road. The head was round and large, the color was mottled brown, and the tail was long and very thick. A panther no doubt.

Horton’s encounter is far from rare. From Blacksburg to McClellanville, sightings of panthers are so common that the Internet has become a bulletin board for South Carolina panther reports, some with accompanying photos.

It’s 130 miles from McClellanville to the Leland site where Smith cast the pugmark – much of that route through the notoriously impenetrable Green Swamp, beloved of all things wild. A cougar could make that trip before lunch.

As a result of so many sightings, and in view of recent research, wildlife biologists now agree that it is possible through what they call genetic exchange that a new strain of big cats unrelated to the extinct Carolina Cougar species could enter the state from somewhere else. Sightings confirm the theory, and each has three compelling similarities: large-bodied cat, tawny-brown color, and a long tail. Those are not descriptions that fit a bobcat, wild pig or bear.

It certainly makes sense that if our neighboring states have panthers, then surely we could have them here. But if we do, why hasn’t one been photographed, trapped, killed on a North Carolina highway, or shot by a hunter?

There are good reasons. For one thing, cougars are endangered and federally protected so if a hunter were to shoot one and be apprehended there could be a $10,000 fine and other penalties including jail time. No reasonable hunter would take that chance.

Cougars are stealthy, people-shy, solitary, cautious hunters rarely seen by humans even where they are known to exist, like in Florida’s Everglades Swamp where they flourish. Do we have similar swamps?

Home to every creeping, crawling, death-dealing creature imaginable, three of the darkest, most treacherous, most formidable swamps in all the South lie along the North Carolina coastal plain — the Great Dismal Swamp, Angola Bay, and the Green Swamp — each similar to the Everglades and perfect panther lairs. The phenomenal resurgence in those places of whitetail deer, a cougar’s favorite prey, makes the habitat ideal.

The Angola, in Pender and Duplin Counties, encompasses 34,000 acres, most of it virtually inaccessible and some of it so desolate toward the interior that it has not been seen by man in a century. All signs of civilization literally disappear in such places, much to a panther’s preference.

Kit Taylor, Charles Wells and Tripp Pippin, all veteran deer and bear hunters, report seeing a large cat on the edge of the Angola while checking roads during a winter ice storm.

“It was late in the deer season, and we were checking downed trees that may have blocked our access roads,” Taylor says. “Suddenly, this big cat with a long tail leaped out of the forest into the middle of the road, stretched out, and in one leap, crossed the road and into the adjacent forest wall. All three of us yelled ‘cougar’ at the same time. Cougars may well be living undisturbed in the Angola, where deer, their favorite quarry are plentiful. It’s such a secretive, secluded place that most hunters and woodsmen may never see a cougar … but we did! We’ve seen bears, bobcats and coyotes there for many years, and we don’t mistake them for a cougar. What we saw was a cougar, plain and simple, probably 100 pounds, tawny brown with a long tail.”

Russ Lane, another native North Carolinian, veteran woodsman and hunter, tells of seeing a cougar while deer hunting in the Goshen Swamp in Duplin County.

“I was hunting from a deer stand in the Goshen, and a panther came out at 125 yards and stayed in my scope for several minutes, hunting with its nose on the ground,” he says. “It was brown, maybe four feet long, and looked to weigh at least 125 pounds. I clearly saw a dark tip on its tail. Later that day I talked to members of a hunt club in the area who use hounds to flush game from impassable swamp areas. They said they have seen panthers both in the Goshen and the Angola. You can believe it or not, but they’re here with us.”

Well suited for swamp life, the cougar is an excellent hunter in all weather conditions. An expert swimmer and skilled climber, it has agility, perseverance, a rather grim set of fangs fore and aft, and they can sprint up to 50 mph! Cougars hunt by sight and scent and prefer deer, but will eat mice, game birds, fish, slugs, grasshoppers, skunks, raccoons, foxes, goats and horses. Interspersed with deep guttural growls and sharp hisses, they emit a terrifying scream much like the shriek of our native barn owl.

Do the regularity of sightings, the documented pugmarks, and the personal encounters confirm the cougar’s return to Eastern North Carolina? Biologists say the panther is gone for good, but a growing group of convincing locals say otherwise, and so the debate continues.

With all the evidence, it’s easy to believe the cougar has once again come to call in our Southern haunts. After all, it seems the big cats are quite literally at home in the deep forests, bays and swamps of our coastal plain, which contain all of their necessities and so few of man’s.

So next time you’ve escaped to a lovely rural area for a bit of peaceful relaxation, and from the nearby woods you happen to hear the chilling scream of a barn owl, relax. It’s probably just a panther.