At Home on the Water

After growing up in a family of watermen, a Wilmington man retires to a trawler 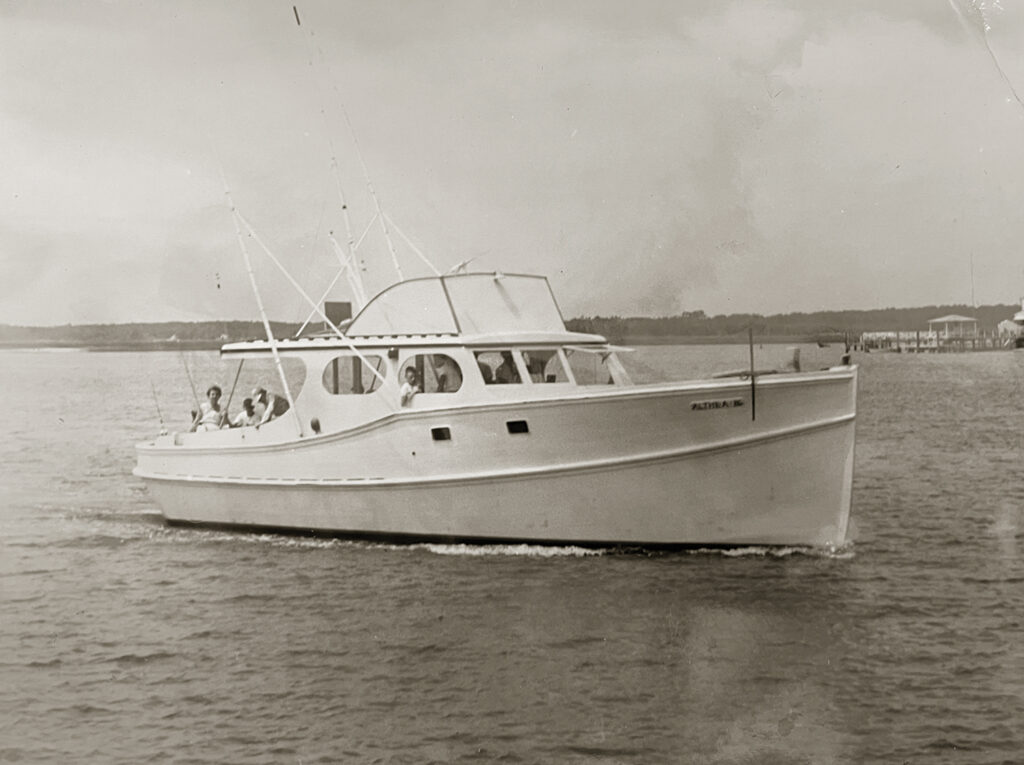 A young boy, most likely Drew, Frank’s grandson, catches a breeze from the window during a charter on Althea B. Historic Photos Courtesy of Drew Brown

For more than 100 years, Drew Brown and his family have been working watermen from the community of Seagate. For 200 years before that they were from farther up the coast in Onslow County. The creeks, sounds and open ocean from the New River tidal estuary to Cape Fear have been an integral part of their lives.

Drew grew up working on his grandfather and father’s charter boats. He has strong memories and respect for the hard work and camaraderie found aboard sport fishing vessels, but his math and science strengths led him to a degree in civil engineering. He chose NC State not only because of its excellent reputation, but as Drew says, “It was close enough so I could be home to help Dad on the weekends with charters.”

The water kept drawing him back. After earning his degree, Drew returned to Wilmington and established a construction company. He might have been out there swinging a hammer and successfully running the company, but he always seized the chance to be out on the water and, when possible, fishing.

In May, he retired to a trawler with his wife of 37 years, Barbara. Drew is now living his dream, bringing full circle his love of the water and his family’s deep history along this stretch of coastal North Carolina.

Drew has done some genealogical work that has shown how deep his roots are in the area.

“I found that Seagate was the relocation destination for a lot of Onslow County residents that lived along the New River in an area known as Stones Bay,” he says. “Many were farmers, fishermen and boat builders.”

The Stones Bay community lies along a little bay within the tidal estuary that sits at the mouth of the New River, just north of Sneads Ferry. By the late 1600s/early 1700s, his Aman side of the family settled there and by 1795 his Brown ancestors had joined the community.

In 1918 Drew’s grandfather moved south, joining others from Onslow County by settling in Seagate, the community between Wrightsville Beach and Wilmington surrounding the area where Greenville Loop and Oleander cross.

In Seagate, Stones Bay natives found themselves in a terrain that was familiar and among people with whom they had a common background. The move kept them close to the ocean and marshes where many plied their trades, and closer to resources that Wilmington could provide.

“Grandaddy and I would walk along the beach together while he told me about old Wrightsville Beach,” reminisces Drew.

His grandfather, Captain Frank Brown, recounted stories of the old fishing fleet that berthed in Banks Channel on the north side of the current Causeway Drive bridge in front of where Tower 7 is today, and of times before the bridge replaced the trolley trestle and the big hotel was the Tarrymoore — later the Oceanic — at the corner of Stone Street and North Lumina Avenue.

The hotels had docks for the fishing fleet and as early as 1905 there were oceangoing charters to take beach visitors out for the day. Captain Frank also told him about the Great Fire of 1934 that destroyed the Oceanic, the docks, and 100 buildings from Stone Street north.

By 1935 Lester Newell and other beach businessmen, seeing the value of the fleet in drawing tourists, spearheaded the establishment of the Wrightsville Beach Municipal Docks on the south side of the bridge. According to the Star-News, in 1935 the fishing fleet captains were Walter Stokely, Willie Moore, S.R. Robinson, Bill Wells, W.M. Wells, Frank Brown, and his cousin, Milton Brown.

The Althea B was launched the same year the Municipal Docks opened. Althea B, captained by Frank Brown and later by Rock Brown, Drew’s father, is one of the legendary vessels in the annals of Wrightsville Beach. In 1935, Frank Brown and 14-year-old Rock built the 45-foot trawler in six months together in their Seagate backyard.

“My great-grandfather would sail/row down from the New River near Jacksonville to help build her,” Drew says.

At the time, many boats were built behind houses, sometimes in a shed, but often in the open yard. You often hear tales of tribulation in moving boats from sheds or yards to the water. Althea B has a story, too. When it came time to launch her, they couldn’t make the turn out of the backyard and had to cut off a corner of the house. And then they had to haul her to the Seagate landing, about where Bradley Creek Marina is today.

As Rock told the Star-News 20 years later, “Had a heck of a time getting it to the water three miles away.”

Named for Frank’s youngest child and Rock’s little sister, Althea Virginia, known fondly as Mickey, the Althea B could carry 20 passengers, handled well in all weathers, was a Hurricane Hazel survivor, and had a 671-hp diesel that could power her all the way to Florida. Frank captained the Althea for 10 years and then handed her over to Rock when he was only 24 as Frank went on to captain the Ruby Lee.

The Municipal Docks became the center of charter fishing at Wrightsville Beach. There was a solidarity among the captains as the sport fishing industry grew and formalized. They went together to present to the Board of Aldermen to make sure their voices were heard. They lobbied the legislature when they felt the restrictions needed adjusting.

In the ’50s and ’60s, the fleet averaged only six boats. Rock Brown captained along with Eddy Haneman, Linwood Roberts and Willie Moore. Drew repeats the observation heard from many, that when he was growing up there were far fewer boats at Wrightsville Beach. There were a handful of commercial or charter boats, but vastly fewer recreational boats. Anyone who crosses the Heide Trask drawbridge today sees boats lining the Intracoastal, filling docks to capacity. The time that Drew remembers is hard to imagine.

Charter fishing was often a family affair. Many wives, having grown up in fishing communities themselves, knew their way around a boat and sometimes served as valued mates. Kids grew up helping out.

“When I was 12 years old, I finally got my Mom to let me mate for Daddy on the charter boat even though it would mean missing school every now and then,” Drew says. “She told me that I could, as long as I maintained my grades. On our first trip of the season in the spring of  ’75 we had a family party from West Virginia. We caught 108 kings and two bonito in less than two hours and were back at the dock by 10. The fish were still biting when we left but the party was too tired to pull any more in. I sliced my knuckle to the bone and have the scar still today. When I threw the fish on the municipal dock for pictures, Captain Eddy [Haneman] told me that was a pretty good morning’s work. Even though I was young and had a cut open finger, I had been accepted as a first mate in the fleet. Finger didn’t hurt a bit.”

High praise from the respected Captain Eddy. What an initiation.

Over the years navigation improved. Before GPS and after compasses and dead reckoning, there was Loran-C, radio direction devices, and still relying on a compass and listening to a boat’s rpm.

The Gulf Stream, where you would go for the big fish, was often as far as 65 miles out but, even if the fishing destination was only 10 or 15 miles, navigation was tricky. Put a storm in the mix, and the difficulty increased exponentially.

Charter boats were known to head out at midnight to be at the fishing grounds by daybreak, returning on the second day. A normal day was to head out at 5 a.m. and return just after dark. Twenty-hour days were not uncommon at the height of the summer season. Although most charter fishermen would do some commercial fishing in the off season, it was not nearly as profitable as chartering.

“It’s mostly sleep all winter, and no sleep all summer,” Rock Brown said in a Star-News interview.

Drew says he had thought about finding a way to live aboard a boat ever since he left for NC State and found himself missing the water. Barbara, a registered nurse at New Hanover Regional Medical Center, realized early on that this was a dream of Drew’s, and it would someday mean finding a way to make it happen.

Barbara is also from Wilmington, having gone to Hoggard High School when Drew was at New Hanover. While Drew was at State and Barbara was at East Carolina, they met at a football game between the two schools. They married in 1984, had twin girls in 1986, and a son in 1991. Drew and Barbara moved aboard their 52-foot 2005 Seahorse Trawler named Traveller, which Drew purchased last fall from a gentleman who kept her in Boyne City, Michigan.

Delivery was from Lake Charlevoix, Michigan to Masonboro. The trip took Traveller through the Great Lakes, Canada, the Erie Canal, the Hudson River, the Atlantic Ocean, the Delaware River, C and D Canal, Chesapeake Bay, and the Intracoastal Waterway, including the Albemarle and Pamlico rivers.

Drew’s high school and college friend, Jim Craig, went with him the whole way. “We added one more adventure to a long list of adventures we have had together,” Drew says.

They unexpectedly spent a week in Little Falls, New York, while an Erie Canal lock malfunctioned. The broken mechanism from the historic canal was circa-19th century and had to be designed and custom fabricated.

The Seahorse 2005 is well-outfitted for a retired couple to live aboard and cruise to near and far. Although Drew’s favorite thing is to anchor in Banks Channel and watch the sunset, his plans include some adventurous travels. Seaworthy and comfortable, Traveller promises to be a well-thought-out retirement refuge and a perfect cruiser to other ports to see other sunsets.