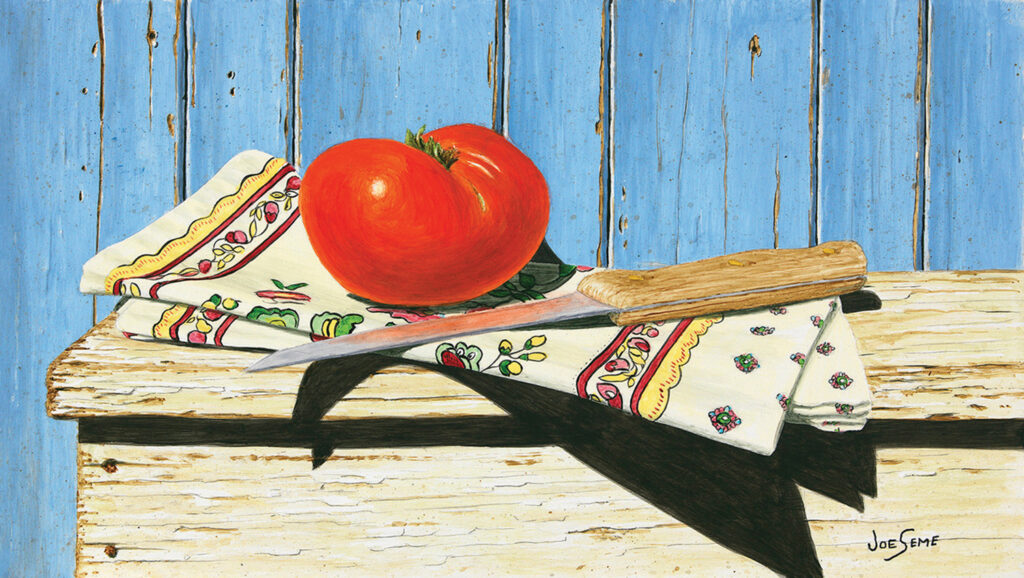 One Tomato, 5.5 x 10 inches, acrylic on board. The napkin featured was purchased by the artist’s wife, Sam Waite, in Bayeux, Normandy.

When Joe Seme’s wife, Sharon (Sam) Waite, passed away in 2019, her bountiful garden produced only a single tomato due to heavy rains. Always an artist but deep down a storyteller, Seme spent hours dutifully painting each line, curve and shadow the fruit exuded while propped against a backdrop in his studio.

One Tomato became a catharsis of remembrance.

“I like to think that Sam is wandering around a garden somewhere now with Claude Monet, whose garden we visited in Giverny,” he wrote on his website. “She’s probably smiling about the tomato painting and would have wanted me to share it, so here it is.”

Holding an English degree with a focus on creative writing, Seme’s life equates to a leatherbound story. As the co-owner of the long ago Hub Pub Club near Sugar Mountain, North Carolina, he had a chance encounter with former New York Times’ art critic John Canaday. Another chance encounter in Aspen, Colorado, found him talking creative legacies with singer John Denver.

Seme, who served in the Marine Corps, started painting seriously after the ski slopes and encouraging art critics. He began with barns or landscapes inspired by winter drives up snow-covered peaks, and the way the sun beamed through icicles midday.

“I paint what I know and what I really love; it has to be an emotional connection for me,” he says. “I used to drive the mountain roads after a snowstorm and see the icicles dripping off the barn and it would make the hair on my arm stand up.”

His sportsman nature resulted in international hunting trips, painting commissioned portraits for outfitter-turned-apparel brand Abercrombie and Fitch. Realistic acrylics of stately dogs and all their quirks took shape alongside his love of creating and collecting decoys.

Today, one of his root head decoys floats in the marsh behind his Wilmington home. The rich garden he’s preserved since Sam’s passing holds memories of two pet ducklings, Aflac and Quigley. A happy story — they became best friends with his retriever and even landed a sleeping spot in the house.

Much like the oyster cans, button hooks and wayward surfboards in his home, an array of the past and its memorable subjects hold dominance when it comes time to create.

“Early on, in an interview with a magazine I said I saw myself as a sort of historian trying to capture these barns and mills before they’re gone,” Seme says. “I did paintings of old mountain people like an old moonshiner, and I sat with him on his porch. He told me all of these stories about running moonshine and being chased by sheriff deputies. It was just wonderful. That’s what I’m about, I’m always looking.”

During a two-week trip to Europe in 2013, Seme and Sam purposely got lost in the French countryside. There were sun-drenched antique stores painted in accents of classic blue, later displayed in Bayeux Antiquities. Two flowerpots with bright red blooms first made the perfect photograph for Sam to capture, and later a Christmas gift to her in Seme’s Trente-Huit. While his recent work seeks to recreate those memories in vivid detail, Madelaine Francois’ Favorite Chair stands out.

“Sam and I were wandering around the French countryside and drove through this courtyard and there were these two huge barns full of antiques and a 17th-century manor, a typical French three-story stone house,” he says. “The proprietor came out, I spoke a little French, she spoke a little English. At the end of the conversation, Sam bought a button hook and I a corkscrew. She invited us inside her home; I had always wanted to go into a French manor house. Sam was sitting there taking pictures and in this hallway was her favorite chair.”

Usually referencing a photograph, Seme recreates imagined worlds of meticulous landscapes with artistic license, sometimes moving a building or two closer to the water like seen in Southport Geraniums. For Bay Rider, his friend provided the sprawling green lawn and water view of the Chesapeake Bay, but Seme’s love for antiques inspired a new narrative, featuring the Uncle Sam weathervane in the American Museum of Folk Art.

“I photographed his view from his den window then I pulled up the photos of the weathervane and painted it as if it were in his yard,” Seme recalls.

Hyperrealism features work in vivid, sometimes excruciating detail. He notes Sam was a gifted photographer, and much like how the eye sees light and shadows, Seme’s realistic scope is required while not declaring fact.

“I’ve always liked things that have a story,” he says. “Like my painting Iron Sam. I look at that and wonder how many hands have squeezed it.”

Iron Sam, painted in “trompe l’oeil” (deceive the eye) style, lent its own anecdote after gallery viewers tried to scrape off a painted piece of dust.

Seme laughs, “In the early days I had to put glass on everything because people couldn’t keep their fingers off.”

Seme’s awards include the Duck’s Unlimited Artist of the Year, and his work has been showcased at Winston-Salem’s Southeastern Center for Contemporary Art’s Realist Invitational. But his favorite work is Simple Tastes, a painting featuring wine labels and antique corkscrews, which he calls his labor of love.

“This is probably the best painting I’ve done,” he says. “My friend was a wine connoisseur and had a collection of all of these great labels. The corkscrews are all flea market finds but the wines are great.”

Seme recalls the encounter-turned-ski outing with John Denver many years ago. The two rode on a chairlift high above the Rocky Mountains.

“I hope Country Roads is still being sung and played 100 years from now,” Denver told him. “People won’t remember who I was, but they’ll remember the song and you’re the same way, Joe. We’re leaving something behind that’s tangible.”

After selling his first painting for $40 dollars, he left a handwritten note thanking the buyer for adding it to their home.

“I still do that, so many people write back to me,” he says.

Today, Seme is now receiving notes from people requesting signed copies of his book, A Short Season with Ernie. The memoir is about his grandfather, former major-leaguer Ernie Padgett.

Seme loves to tell the tales of others, or how someone else’s story impacted him to paint, yet he is also sharing his own tales. One tomato, growing up the grandson of an MLB player, even ducks floating in the marsh are the tangible and handwritten mementos that will one day become his 100-year stamp.