Don’t throw away that banana peel. Put it to use! 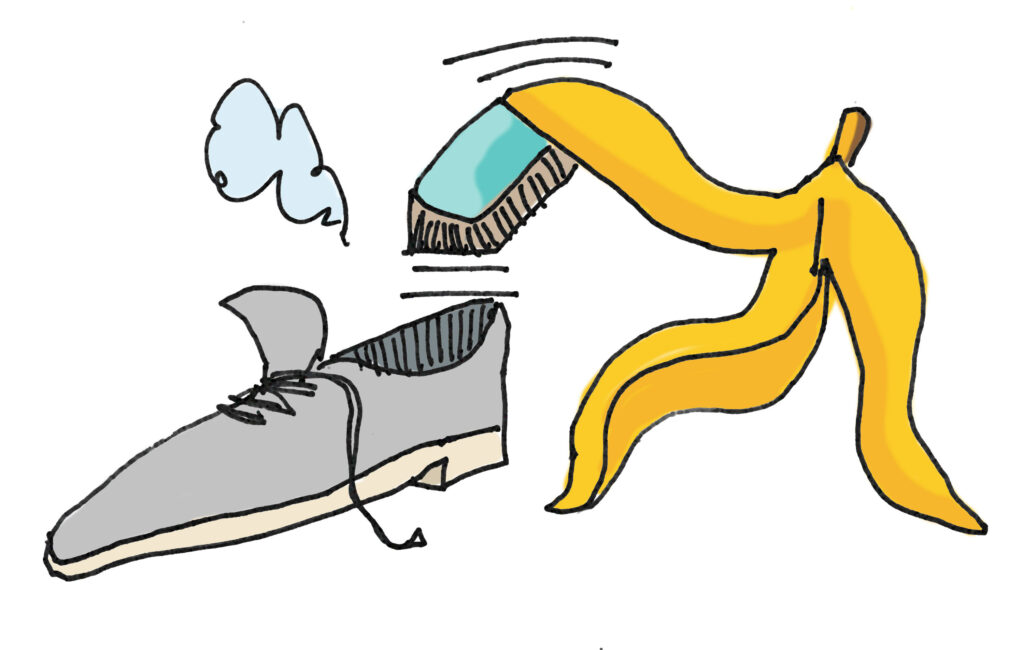 Illustration by Will Jones

Banana peel has a wide variety of uses, from brightening skin and teeth to being cooked and eaten as a bacon replacement. There are even some “out there” claims about the wonders of the peel that include removing wood splinters, eliminating warts, treating acne and shining shoes.

Peels have more uses than just adding them to the compost heap. They contain nutrients that include vitamins B6 and B12, magnesium, potassium, fiber, protein, and cancer-fighting antioxidants.

The inner part of the peel contains polysaccharides, which have been reported to stop the itch of mosquito bites. Others claim it aids in relief of psoriasis and cuts, and reduces swelling from acne. Reports suggest the moisture-packed peel can draw out wood splinters if taped to the area for about 30 minutes. A longer, daily process is suggested for healing warts. Attach the inside of a green or slightly yellow banana peel to the wart at night for a few weeks to make it shrink away.

The fleshy peel can be used to polish leather shoes. The potassium seeps into the leather and heals or fills the scuff marks, leaving shoes looking new after a buff with a clean, soft rag.

Plant growers may already be making fertilizer with peel and water but might not be aware that the mix also deters aphids and ants, which don’t like the high potassium. Another use is to polish the leaves of indoor plants. A banana peel can gently remove dust and add a shine.

At-home beauty articles tout using peel to whiten teeth and tighten skin. Rub the inside of the peel on teeth and let it sit for about 10 minutes, then brush as usual. Doing this daily for one to two weeks can whiten teeth, and the antioxidants in the peel may also help fight gum diseases.

For tighter, brighter skin, place banana peel insides on skin, across the eyes, under eyes and on cheekbones for about 10 minutes, then wash away the residue and moisturize.

Of course, the primary use of a banana is to eat it, so why should it be different for the peel?

Like all edible fruit peelings, the banana peel will need a good, gentle scrubbing and air dry before use. Then it can be boiled to make sleep-enhancing tea or used uncooked as a smoothie ingredient.

But one of the most alluring ideas, especially for anyone trying to eat less meat, is to fry up some like bacon.

Peel bacon looks a lot like the real thing and the taste is similar to pork bacon, but it will likely take some experimenting to achieve a close faux bacon product. One popular recipe calls for a soy sauce marinade, but that can make it too salty. Suggestions would be to use a low-sodium blend, maybe watered down, or use coconut aminos as advised in a peel bacon recipe available at GirlsWhoEat.com.

It is important to have the skillet or air fryer warmed up before cooking. Peel bacon cooks extremely fast, in about two minutes, so it should be tended. It is done when it starts to bubble.

Many other uses can be found online. Cooks sometimes wrap drier meats, like chicken, in banana peel to help retain juices. The Food Network lists a banana peel cake recipe. And someone found and reported in Prevention Magazine that rubbing peel on a CD or DVD and then using a glass cleaner can fix a skip.