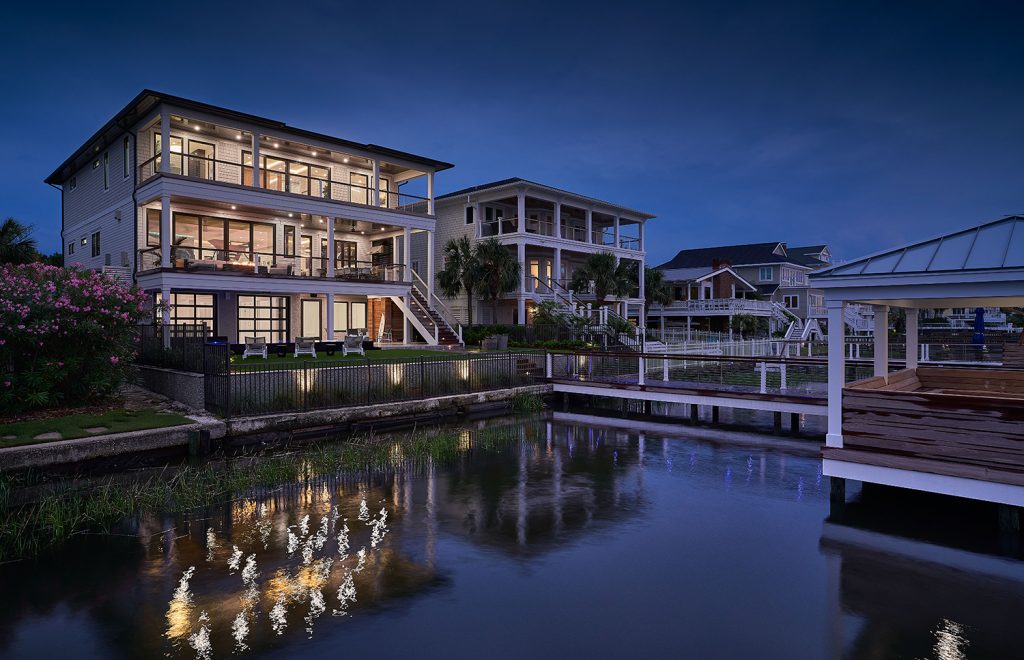 The vintage Pelican Drive home was modest by Wrightsville Beach standards, about 2,300 square feet. Built in 1967, it had been improved over time and palm trees planted long ago had matured, adding a layer of privacy to the two-story dwelling.

“I had planned to live in the house for a couple years,” reminisces the buyer.

The massive storm made landfall at Wrightsville Beach on Sept. 14, 2018, and hovered. Faced with mandatory evacuation, the homeowner had retreated to the St. Regis Aspen Resort, Colorado until Wrightsville officials opened the town back up to residents.When the storm damages were assessed 2 to 3 feet of water had entered the ground floor and the house was condemned by Town of Wrightsville Beach planning and zoning officials. The structure was razed, and the process was begun for a new home, beginning with lot improvements. The homeowner added over 20 loads of dirt and a second retaining wall to protect against that type of water inundation ever happening again.

The architectural plan started out simple, then morphed into something bigger.

growing renaissance of vintage Pelican Drive properties, initiated in 2012, was a contributing influence.

With the set of plans drawn by Goodrich for the 4550sf home, the homeowner turned to interior designer Bridget Mazer, who had appointed an uncle and aunt’s Landfall home.

Several factors influenced his choices, including a fondness for fine Italian yacht designs and the desire to incorporate exquisite woods and artfully crafted cabinetry into his home’s interior. A nautical contemporary Carolina Beach canal-front home, another Mazer interior design, also echoed his lifestyle.

Blending all these ideals into one cohesive design approach was Mazer’s challenge, yet her client was decisive when presented with choices. With a mandate for modern plus masculine, the result is, well, pretty sexy by Wrightsville Beach standards.

Mazer’s first mission was the home’s curb appeal. She selected a glazed French door for the front entry, and specified where the builder would use shingles versus siding.

Goodrich says that the homeowner knew exactly what he wanted.

“Originally, it had columns on all the bearing points,” he says. “He got rid of the first column, then another and another. We put an I-beam in and took the columns out.”

The single I-beam — to support the staircase — allows the foyer to flow into the open great room and prevents the obstruction of the view by the columns. In addition, doors and

windows slide and fold open, accordion-style, from end-to-end along the east/west axis, maximizing the stellar views.

From this vantage point overlooking Lees Cut, all eyes are focused on the water. The landmark Palm Tree Island appears in the near view. Summer Rest Road to the west and a tree line edging Landfall’s point all sweep into sight across miles of savannah marsh and hummocks that characterize this barrier island.The floorplan allows for ground-level garages and outdoor recreating. The second level is for entertaining — living, dining and cooking indoors and out.

“I really focused the build of this toward the outdoor aspect, being that it backs up to the sound. All the doors/windows on the rear open up to bring the outdoors inside,” the homeowner says.

His friends have boats and Jet Skis and are frequently pulling in to hang out.

“My favorite part of the house is the outdoor living aspect. I find myself more often than you would

believe, using the outdoor kitchen, sitting by the fireplace, in the pool/hot tub, or on the dock,” he says.

From a plush, icy blue leather and shimmery silver interior, where there is seating for 12 at the waterfall-edge island and formal dining table, into the high contrast shade of a tone-on-tone natural wood glade, the engaged porch hosts a custom-designed outdoor kitchen equipped with fire and water stations.

An architect-designed collection of classic Brown Jordan outdoor furniture pairs dining table and chairs with seating for eight, and four bar stools line the counter beneath the pass-through window.

For the homeowner, hanging out may mean plunging into the black granite infinity pool, grilling out and dining al fresco, or igniting the linear gas fire pit for gathering ’round and stargazing.

For a weekend gathering, “Everybody brings a side and one of us will run out to the store to grab something to grill,” he says.

If the crew launches a golden hour sunset cruise around Harbor Island, they will find a glittering beacon of light awaiting upon return to the home to the dock, or under the dock house drawn on a scrap of paper for builder Dennis Moeller to construct.

“When you are cruising by on boats at night, it’s really spectacular,” Mazer says.

Part of the home’s interior allure may be attributed to a 15-foot by 10-foot glass-on-acrylic mural by Alex Turco, the living room backdrop that welcomes the homeowner and guests.

On a trip to Florida, the homeowner visited the artist’s Miami Beach studio and personally selected the piece, along with a secondary one installed in the master bath/shower.

The effects are much like an immersion beneath Wrightsville’s surf; clear water, head-high barrels. Mazer placed a downlight on the living room panels to add more drama.

Exciting lighting throughout is another focal point.

Three large LED halo pendants shine above the kitchen island. The array is enhanced with recessed can lights and toe kick accents beneath the counters.

A trio of whimsical fixtures placed above an elk head trophy — bagged on a Colorado hunting expedition — mounted in the stair landing cascades light into the foyer and leads guests to the top floor where in addition to the master suite are three additional guest rooms, all with en suite baths and walk-in closets.

Goodrich designed the master bedroom suite to look straight out the windows to water.

During the length of the design project that began in December 2018 and wrapped Labor Day weekend 2019, Mazer squired her client around the High Point Furniture Market. She laughs, saying she spent a week there, and her homeowner spent three hours.

“I wanted him to sit on some things at the market. He noticed the brands he liked the best. Most pieces are made in North Carolina, almost 90 percent,” she says.

Where she could, Mazer worked in organic elements to satisfy her client’s craving for solid woods. Washed white oak floors reveal the inherent movement in the wood, while creating an organic, sand-colored template to mirror the outdoor environment.

But when it comes to the lawn? The homeowner says his Labrador retriever and his German shepherd have torn up the sod, so the last punch list item is the most recent addition: artificial turf.

There is so much of everything to be shared with family and friends.