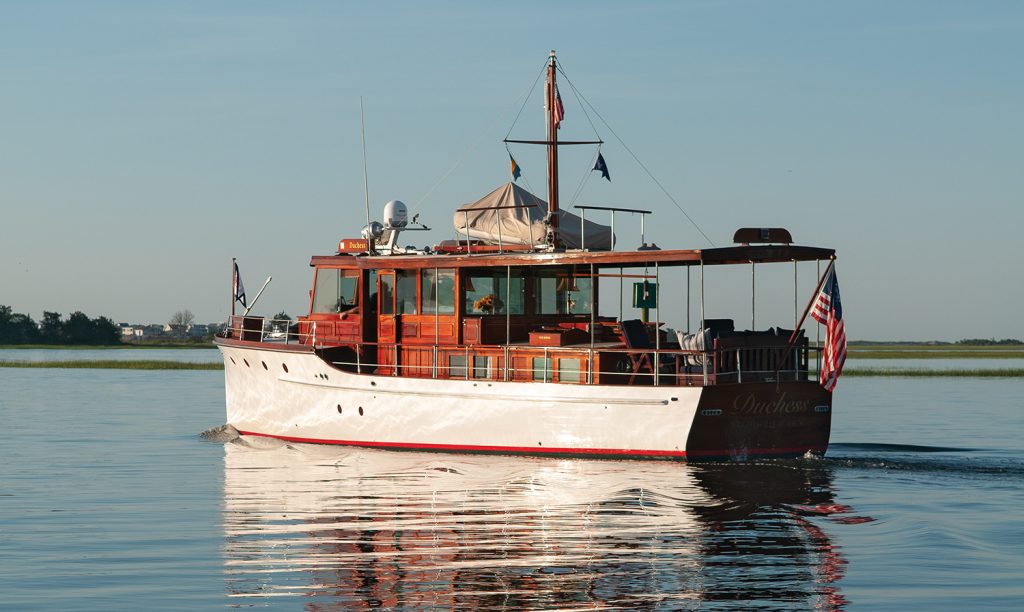 Her classic shape and beautifully varnished mahogany make Duchess a unique sight around Wrightsville Beach amid all the fiberglass fishing and pleasure boats. Allison Potter.

John Tinney was enamored by wooden boats from an early age. His foray from aficionado to collector began with a 1943 Elco rounded stern Core Sounder named Karen.

Now Tinney cruises the waterways with his 45-foot Elco motor yacht, the Duchess, built in 1930 and powered by twin diesels. The elegant classic boat garners more than its fair share of looks.

“People are always wanting to get a closer look and give you a thumbs up as they pass by,” Tinney says.

Duchess needed extensive repairs about five years ago, and when it looked like she was headed to the junkyard the owners chose instead to completely overhaul her with modern equipment. They kept the boat a year before donating her to the Block Island Maritime Fund. Then the antique craft was purchased by Tinney.

“In this boat, you’ve got the best of both worlds, in that it has the old look to it but everything in it is brand new: state-of-the-art electronics, depth sounders, three air conditioners, auto steer and GPS,” he says.

With berths for five, Duchess has cruised from Tinney’s home port of Wilmington as far south as Georgetown, South Carolina, and as far north as the Chesapeake Bay.

Drawing 4 feet, Duchess has a fairly shallow draft but Tinney says the local waters are becoming more difficult to navigate as the Intracoastal Waterway has not been dredged in some time.

“You have to watch out,” says Tinney, who attends shows with other owners of classic wooden boats, including Jerry Pope and Tom Morrow.

Nostalgia is a driving factor for those who enjoy classic wooden boats, but Tinney says the boat’s ride is a big part of the appeal.

“The boat has a solid wooden ride to it when it slices through the water that the modern conventional hulls just don’t have,” he says. “It’s also nice that it has a classic look to it.”

We previously featured another classic Elco in our pages: Rebel, a 50-footer built in 1928 in the Elco yard at Bayonne, New Jersey. Rebel is an Elco Flat Top Motor Yacht, also called an Elco Commuter Yacht because 19th-century tycoons used them to get to Wall Street from Long Island.

The boat received a complete overhaul including electrical, plumbing, mechanical and the engine at Bennett Brothers Yachts dock at Cape Fear Marina, north of the Isabel Holmes Bridge. Craftsman David Flagler made the structural repairs, replacing pieces that had been subject to wear and tear over nearly 90 years, repairing collision damage and sprucing up the interior.

As part of that feature we also told you the story of the Sylvia II, a 1934 Core Sound fishing boat built in Morehead City. The Sylvia II is said to be the oldest commercial and charter fishing boat left in North Carolina. In addition, we told the story of the Ada Mae, a skipjack built in 1915 in Rose Bay, North Carolina. You can read about these boats and a few more in our virtual archives by going to our website to read Floating Masterpieces by Simon Gonzalez, September of 2016.