The Island That Won’t Be Tamed 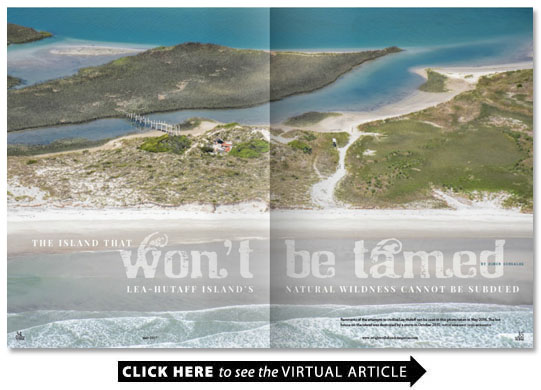 Evidence of man’s domestication of once-wild barrier islands can be seen up and down the coast: Wrightsville Beach. Figure Eight Island. Topsail Island.

These strips of dunes and sand between the ocean and the sound were once habitat to only shorebirds sea turtles and other wildlife. But then came the humans with bridges and building materials constructing houses restaurants and businesses. They became destinations for those who wanted to live or play at the beach.

Such was the plan for Lea Island. But nature had other ideas.

Technically Lea Island is no longer an island. It joined with Hutaff Island during a hurricane in 1998 when Old Topsail Inlet (Elmore’s Inlet) filled in creating one nearly 4-mile-long stretch of island between Figure Eight and Topsail Island now called Lea-Hutaff.

Whatever the name it remains one of North Carolina’s few remaining pristine barrier islands with more than 5 600 acres of undeveloped land.

The island with the Atlantic to the east and the Intracoastal Waterway to the west New Topsail Inlet to the north and Rich Inlet to the south is accessible only by boat.People come to enjoy the beach to fish to camp. But then they depart leaving it to the thousands of shorebirds wading birds waterfowl and marsh birds that live there during nesting migration and wintering seasons.

Lea-Hutaff has been designated by the Audubon Society as one of 96 important bird areas in North Carolina. During the spring and summer months Wilson’s plover American oystercatcher black skimmer least tern and the federally threatened piping plover nest and raise their young on the island. The island represents the southernmost regular breeding site for piping plover.

“It’s a significantly important area ” says Walker Golder director of Audubon North Carolina’s Wilmington office. “It’s a vital nesting site for many species of birds that are listed as endangered or threatened. It’s an important migration stopover for shorebirds many of them coming from the Arctic and heading to South America. Because it’s a natural beach it’s quite important to sea turtles. It has ideal habitats for birds and other wildlife. It’s a great scientific laboratory for the study of coastal birds.”

That’s fine with the namesake family that still owns Hutaff on the south end. George Hutaff originally purchased the land in 1925 from W.H. and J.H. Lea. A story in the Wilmington News Dispatch that year reports that he bought it as an investment hoping to develop it later.

“There is not much marsh between this beach and the mainland and it would not be difficult to construct a road from it to the land ” he told the newspaper.

But his descendants say he mostly wanted nothing more than an occasional getaway to enjoy his favorite hobby. He quickly constructed a fishing shack on the island and announced that he did not intend to stop anybody else from enjoying the sport on his beaches. He also noted the promise of a good duck hunting season on the island.

“He loved to fish and was a big drum fisherman so word was he decided to buy the island out of his love for fishing ” says Wilmington real estate agent Henry McEachern grandson of Tabitha Hutaff McEachern George Hutaff’s daughter. “Over the years we have been approached by people wanting to buy it to potentially develop it but we have not pursued that nor intend to.”

Lea Island on the other hand was supposed to be a community by now.

Joseph Hampton Lea owner of J.H. Lea and Sons Seafood in Hampstead purchased the island from the North Carolina Board of Education in the early 1950s as documented by “A History of Hampstead” author and historian Jack Howard. The Lea family sold it in the 1980s to a Virginia developer who divided the island into 30-40 1- to 2-acre lots stretching from the ocean to the sound.

“He sold to people all over the East Coast ” says Camilla Herlevich executive director of the North Carolina Coastal Land Trust. “It might not have ever been as densely developed as Wrightsville Beach but a lot of these folks would have liked to have had homes there at some point.”

Herlevich helped found the Wilmington-based conservation land trust in 1992 with the dream of saving and preserving lands in the North Carolina coastal plain. Lea Island was soon on the radar. The thought of keeping an ecologically important barrier island free from development was very appealing.

“Lea and Hutaff Island has always been a special area that if we had opportunity to put into conservation would be one of the most significant things we could do ” Herlevich says. “It’s a barrier island. They’re just not making those anymore. It is a place where wildlife can exist in areas where they used to exist before humans came on the scene. I’m not against development but how extraordinary to save a place that can be special forever.”

There had always been adventurers — campers fishermen — who stayed on the islands for short periods of time attracted by the solitude and isolation.

“It’s super cool ” says Nathan Henry archaeologist and conservator with the North Carolina Underwater Archaeology Branch. “We used to go camping there all the time. There was a creek that used to be nice and deep in the back and you could get pretty far back in there. You’d go in on a rising tide.”

It’s camping on the most primitive level with tents and sleeping bags. There are no facilities. Everything must be carried on and carried off. The fluctuation in tides can strand a boat even for accomplished captains.

“Camping here is a whole different matter ” says one old salt who prefers to remain anonymous and has been camping on the island for more than 20 years. “You are going to be somewhat stranded. But when you get a bunch of guys up in here frying fish telling lies with that fire blazing it’s awesome. There’s nothing like it.”

Adventurous outdoorsmen have been using the island for decades.

The history of it goes way back maybe to beyond the ’40s. There were fish shacks. People used to pull for mullet row boats out and set nets. There was plenty of duck hunting back then too.

Our old salt recalls the Hutaff fishing shack at the south end of Hutaff Island with a working hand pump and a floating dock with a passageway from the beach to the island.

“It was open and fully provisioned ” he says. “They had signs that said if you get caught in a storm make yourself at home. It sat there for years. Those guys would bring little boats in there drink brown liquor fish and raise Cain. It was an awesome place. Fully provisioned. Coffee cooking oil skillets first aid kits everything.”

The floating dock tended to float away in storms and wash up in someone’s yard in Hampstead. After one such incident a homeowner filed a complaint and the floating dock was not replaced.

That was the fate of most of the temporary structures on Lea-Hutaff. They would be there awhile until the island rejected them. Birds turtles and wildlife were welcome to stay. People it seemed were supposed to be visitors.

But when the lots went up for sale it looked like the north half of the island would become dotted with houses.

The buyers were taking a gamble. There was no electricity or running water no simple way to get building materials to the island. Yet the attraction was easy to see. The parcels were selling for between $20 000-$50 000. If the infrastructure came about beachfront living at an affordable price was within reach.

Three houses were built. The first belonged to John and Irene Glump. The owner soon began to refer to it as “Glump’s folly.” News reports state that five or six lots separated his house from New Topsail Inlet. But barrier islands migrate and over the course of a few years Glump’s folly was at the northern tip of the island. The inlet eventually took it.

The 1 300-square-foot house was built in 1990 with materials ferried over by teams of boats. It was powered by a solar panel and propane. The family used it for summer weekends. They would load supplies on a boat and haul them by ATV to the house.

The house survived nine hurricanes over 25 years before it too succumbed to nature. Shifting sands and seas undermined the 20-foot pilings supporting the structure. In October 2015 an unnamed storm knocked the house down. In the battle between environment and development the collapse of the final house was symbolic of a last triumph for nature. But the fight to make sure it’s a lasting triumph and to keep Lea-Hutaff as close as possible to its historic ecological state goes back to 2000.

That’s when the North Carolina Coastal Land Trust began working with the Audubon Society and the state to preserve the natural habitat by purchasing lots from owners who realized their dreams of a seaside home were unlikely to be fulfilled.

“We got the ball rolling ” Herlevich says. “We picked up about 20 lots. One of the goals we had was to do the best we could so that development was not a viably economic alternative. Shorebirds can’t exist with development in many places. They have to have a wide swath of beach. If you’ve walked on those places without condos it’s just special.”

The Lea Island State Natural Area was established in 2003. Audubon acquired a 35.7-acre tract on Lea Island in 2010. The conservation groups now control about three-fourths of Lea Island.

“There are some holdouts ” Herlevich says. “We periodically send out letters asking if they are willing to sell but we’ve picked off most of the ones who are interested. There’s nothing that can justify building a bridge. There can never be a Wrightsville Beach development there.”

Audubon North Carolina posted signs informing visitors about the ecological importance of Lea-Hutaff and asking them to respect nesting sites and wildlife.

“The Hutaff family has been quite generous in letting us protect and monitor birds and sea turtles on their end of the island ” Golder says.

Audubon personnel talk with visitors about sharing the sand during the spring and summer. They monitor the island year-round.

“Our primary interest is in protecting the island so birds and sea turtles can survive ” Golder says. “Historically birds that depend on barrier islands once had free rein of the coast. Over many decades they have been squeezed into fewer and fewer habitats. Lea-Hutaff is a great resource. A naturally functioning barrier island also helps sustain the marsh behind it. The entire complex is special. We work with people on the island so they understand what is protected.”

If they respect nature visitors are still welcome to use the island. Campers still stay overnight or longer. But the island sends out ongoing reminders that Lea-Hutaff is not their habitat.

“It’s loaded up with raccoons rabbits owls ” the old salt says. “It’s got a population of little sea rats that look kind of like a gerbil. There are snakes here but I don’t think they’re poisonous. In the summer it’s completely uninhabitable. The bugs man. You won’t beat them back. Hornets biting flies deer flies no-see-ums mosquitoes.”

He remembers one overnight stay when he got stranded because the tide receded before he could get out.

“I didn’t have any gear ” he says. “I got stung by a wasp. It got cold. I wrapped up in an old tarp. A raccoon had got up in it and had pooped. I didn’t realize it until I was all cocooned up in it in the middle of the night. I was covered in raccoon poop freezing stung up. Finally the sun came up and I could get out of there.”

Once again Lea-Hutaff had triumphed.