Love Is Not Canceled

The pandemic can’t put the kibosh on these weddings 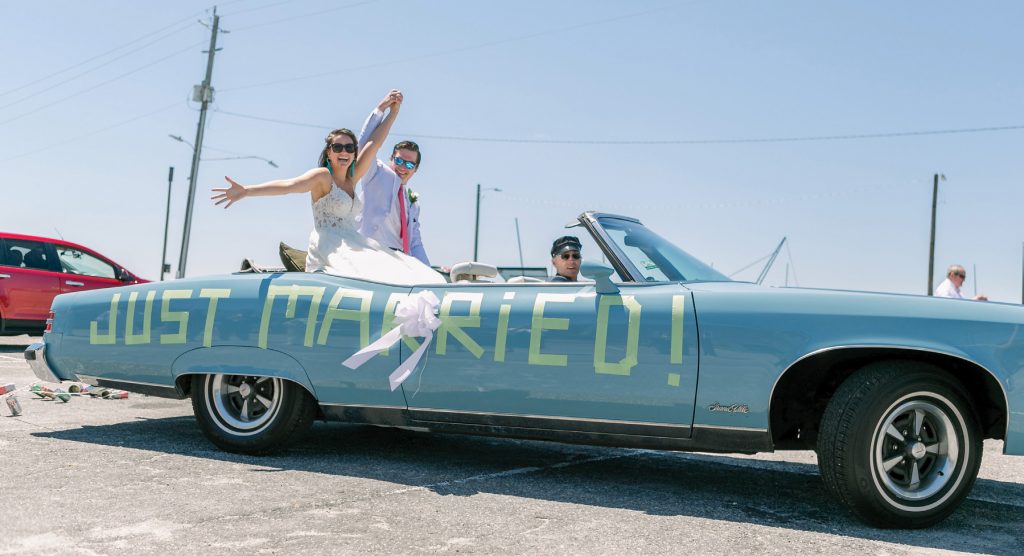 Planning a wedding is no easy feat. It can take months to put together. There are so many details that go into creating an unforgettable day that will propel a couple into their new life together.

But what happens when a pandemic jeopardizes that planning?

While many couples have opted to postpone their weddings, others did not let the coronavirus keep them from saying “I do” — even if that meant their big day wasn’t exactly what they envisioned.

We spoke with four beautiful Wrightsville Beach-area brides who continued with their nuptials despite this time of uneasiness and unpredictability.

Jackson Taylor and Grace Cahill of Charlotte began planning their wedding after getting engaged in July 2019. Jackson’s family has lived in the Wrightsville Beach area for five generations, and the couple eagerly anticipated a ceremony in downtown Wilmington. They made reservations to host about 200 family members and friends.

In mid-January 2020, the couple sent out save-the-dates for a September wedding.

“Never in my life did I think I would have to say to most of our guests that they couldn’t come anymore,” Grace says.

But that is exactly what she had to do.

In the early stages of the COVID-19 outbreak, September seemed so far away. Surely there would be no issue having their wedding. The lockdown wouldn’t last that long, would it? Despite their hopes, they quickly realized they would have to make some changes.

“Obviously, our first priority was being safe and responsible,” Grace says. “A wedding is only for one day and if it could potentially hurt someone it’s not worth it.”

With the state still under lockdown orders in early August, they got their deposit back from their original venue and began to make new plans.

Grace and Jackson never considered pushing back the date.

“We were already planning in case we had a hurricane and decided that we don’t care if it’s just us, we are not postponing,” Grace says. “For a lot of people, having a big wedding is so important, but for Jackson and I that wasn’t what was important.”

It was hard to decide who to include for the in-person festivities. They decided to keep the guest list strictly to immediate family members and their bridal party. Those who could not attend were asked to watch the ceremony virtually.

“We actually got a Zoom vendor which I thought was really incredible,” Grace recalls. “The quality was so much better than a live stream off an iPhone, which was my initial idea.”

The couple were joined by 20 of their closest friends and family members on the front steps of Mount Lebanon Chapel on the Airlie Gardens grounds to declare their love for one another. After the ceremony, they celebrated their new marriage at Jackson’s family’s beach house on Wrightsville Beach.

“It was so nice to still be able to get married even amid something so horrible,” Grace says, “A wedding is deeply personal and in the end, this small wedding felt just like the wedding we were always supposed to have.”

John Duffy Davenport popped the question to Sara Fagel in December 2018 and the couple took on the planning process throughout the following year. Duffy and Sara, who currently live in Raleigh, felt Wrightsville Beach would be the perfect place for the ceremony. Duffy’s family lives in the area, and it would be an ideal vacation destination for Sara’s Canada-based family.

“Wrightsville Beach is one of our favorite places,” Sara says, “We’re actually moving there in 2021!”

The pair organized a venue and a date — the Carolina Yacht Club in May. In March 2020, Sara and Duffy connected with their wedding coordinator for a final meeting.

“For the first time, it hit us that this was real,” Sara says. “We were getting married and we were so excited to talk about all the details.”

Little did the couple know, their plans were about to be turned upside down.

A week later, Sara received a call from their caterer. He wouldn’t be able to serve their wedding because of the impending lockdown. More bad news followed.

“After that phone call, the other calls started to trickle in,” Sara says. “Everything changed really quickly.”

The couple delayed making any decisions in the hopes that things would settle down in the upcoming weeks. They waited patiently, following the news of the pandemic closely and even watching their friends and family members postpone their own weddings.

Sara had dreamed that her family would fly down to Wrightsville Beach from Canada to meet her fiancé’s family and to join her on her special day. Unfortunately, as the lockdown pressed on, the U.S. borders were shut down and the realization that her family wouldn’t be able to join hit her.

Sara and Duffy decided to keep the original wedding date but were unsure of what the day would look like.

“I still held out hope that we would figure out a way to make this work,” she says. “But about a week before our wedding we realized it wasn’t going to work out as we planned.”

Sara and Duffy Davenport were married on May 2, 2020, at the Carolina Yacht Club. They were joined by 10 of their closest loved ones and streamed the wedding online.

“A lot of people actually dressed up and popped champagne on Zoom as if they were at the wedding, which was really cool,” Sara laughs. “I got ready with all of my bridesmaids on Zoom, Duffy’s mom really made the place look so beautiful, and one of our friends even decorated an old-school getaway car with cans attached to it. Everyone really made our day so beautiful and special, but I definitely missed everyone who couldn’t come.”

The couple plans to celebrate with all their friends and family members who were unable to join, as soon as it is safe to do so.

Getting married during the pandemic might strip away a lot of things that traditionally go along with weddings, but it all boils down to what is most meaningful.

“Just remember what is actually important,” Sara says, “It is so easy to get lost in all the planning that you can forget the only thing that matters is the person you are going to marry.”

Former Wrightsville Beach resident Tabitha Ledford says she has no regrets in the way she and her family chose to go forward with her October wedding to Chase Rouse of New Bern.

The couple had been together for six years when Chase proposed on Aug. 17, 2019, in the Bahamas with several of their friends looking on.

Like all brides this season, she could not have foreseen the events of 2020.

The couple’s venue, booked in 2019, would not issue a refund. Their save-the-date cards for October 10, 2020, went out a year in advance. The dress had arrived.

After discussion with both the bride and groom’s families, and not a little agonizing, they chose to stay the course.

“We stuck to the plan,” Tabitha says. “We wanted to get married regardless. We decided if people came, they came. If not, that was okay.”

They sent out 200 invitations and 160 came back with a yes, but ultimately just over 130 guests attended the picture-perfect formal wedding ceremony, held outside at a New Bern country club.

“Both families were missing some very important people, but we made the absolute best out of it,” Tabitha says.

The couple close on their home this month.

“I am living my dream,” Tabitha says.

Andrew Young and Kelsey Long of Supply were engaged five years ago on December 1. Kelsey was only 19 and wasn’t quite ready to get married, but after years of being engaged the couple decided they were finally ready to plan their wedding.

They tossed around the idea of getting married at the courthouse, but Kelsey opted for a real ceremony surrounded by her friends and family.

“I missed prom and homecoming, so I wanted to get dressed up and look pretty and have a bunch of people that I loved around,” she says. “I chose the date September 21st because of the Earth, Wind & Fire song, so every time we hear it, we can think of our wedding.” But it ended up being on the 20th because that was the Sunday.”

Kelsey and Andrew hoped the pandemic would be over by then and life would be back to normal. But as the date drew near, the couple realized they would have to make some major adjustments.

“We had already sent out save-the-dates and we waited almost six years to finally get married, so we figured if we didn’t do it now, we never would,” Kelsey says.

Their smaller, socially distanced wedding took place Sept. 20, 2020, in Kelsey’s Aunt Diann’s beautiful backyard on Stokley Drive, off Airlie Road. The couple recorded the ceremony and posted the video on YouTube for all of their loved ones. They have already started to make plans for an anniversary party in 2021 to celebrate with those who couldn’t be there.

“We never really wanted a big wedding,” Kelsey says. “The wedding we had was exactly what I wanted all my life.”

Some of Kelsey’s favorite parts of the day include being walked down the aisle by her Uncle Johnny, putting on her stunning wedding gown, and laughing with her family while wearing silly mustache face masks.

Kelsey offers a simple piece of advice to other couples seeking to get married during these trying times.

“Don’t stress it too much,” she says. “At the end of the day, it will end up perfect no matter what and will always be an amazing moment to look back on.”