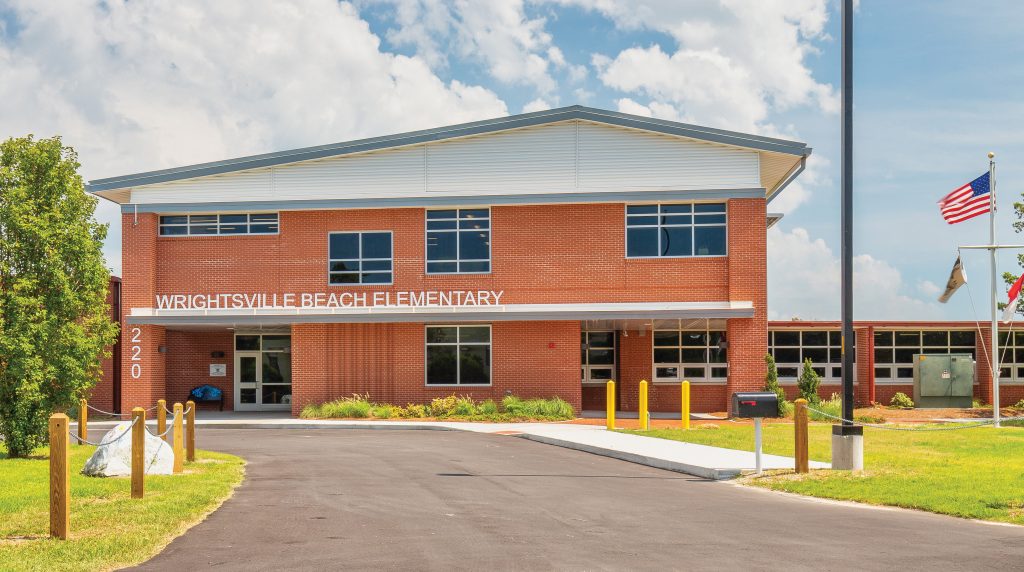 It’s a clear, November morning, a perfect day for admiring the view of the salt marsh from the fifth-grade classroom on Wrightsville Beach Elementary School’s new second floor. The $7 million renovation of the school’s original building and the addition of a second story, completed last summer, was the final project authorized by the 2014 New Hanover County school bond.

“We were very excited to be part of the bond. It was the smallest project on the bond, but arguably the most complex,” says Jackson Norvell, principal of the school located on North Harbor Island at 220 Coral Drive.

The second floor is constructed perpendicular across the top of the existing building, built in 1953. Modern metal and structural steel materials are paired with traditional school brick to blend old construction with new. Inside, a contemporary centerpiece staircase painted turquoise blue leads to the new media center and hallway lined with clerestory windows.

Fifth-grader Violet Uebele is the first to make it to the top of the stairs from P.E. and rounds the corner to the classroom.

Violet, a Wrightsville Beach Elementary student since kindergarten, is enjoying the movable desks, brightly colored chairs, 10 additional classrooms and her classroom with the million-dollar view. Before the renovation, the school was characterized by overcrowding, with some students forced to attend class in trailers or at Wrightsville Beach Baptist Church.

“For two years I had to be in a trailer; it’s cool I don’t have to be in a trailer anymore,” Violet says. “I love the chairs, I love the desks, and I love how there are a lot more windows. I also love that when you are in class you can look out the window. You weren’t really able to do that before, it was just one little square.”

“I think we had two windows in my mobile unit before with a view of another mobile unit,” he laughs. “Now, you look out at the grandeur of the marsh and watch it change as the seasons go by. It’s going to be great for the students.”

John Sawyer of Sawyer Sherwood & Associate Architecture was a student himself at Wrightsville Beach Elementary. Back then, in the early 1960s, there were only three classrooms. Sawyer remembers playing flag football at recess and exploring the marshes.

While walking the campus before designing his alma mater’s renovation, Sawyer noticed that, despite having borne the brunt of major hurricanes including Hazel, Fran and Florence, the school still had good bones. The roof overhangs, for example, were deeper on the south face than on the north, making good use of natural light and ventilation. Plus, its mid-century modern design was back in style.

“Building design has come full circle and now we are again concerned about daylight, energy conservation, and designing with locally sourced materials,” Sawyer says. “Very little renovation had been done since it was built in the ’50s. We found we could preserve the basics of the plan. We tend to, in our design, try to keep things fairly simple in appearance and kind of lean and that’s consistent with mid-century modern architecture.”

Rotating the second floor to step across the existing building was done to alleviate impact on the original one-story structure. It also maximized light and the sun’s solar energy. Roof overhangs, exterior sunshades and specialized glass were used to accomplish daylight without heat gain. The second-floor corridor is open and airy with exposed roof structure and clerestory windows bringing in sunlight. Structural steel beams elevate the second floor, creating an outdoor covered instructional area.

“By virtue of the second story built up on columns, there’s now an outdoor covered area that’s massive,” Norvell says. “Especially these days, wanting to be in open air as often as we can, we’re having some learning going on down there. It’s a very neat side effect of the design.”

Pictures of students holding fish and enjoying the estuaries via kayak decorate the hallways. The school has a marine science program and its own dock. Sawyer added storage units for kayaks, fishing gear and other outdoor learning tools.

“Now you can go to the shark tooth pit at recess,” Violet says. “Usually you could only go once every two weeks and so now that’s fun.”

The new construction will enable Wrightsville Beach Elementary School to weather any storm that comes its way with a stronger, more energy-conscious structure built with flood resistant walls.

“It will perform well with very little energy; that’s the big difference between a building from the 1950s that had no insulation,” Sawyer says.

Principal Norvell is happy to have his school complete.

“What’s been a dream is now a reality,” he says.

“My friends really seem amazed by the school, especially the new ones here,” she says. “They were like, ‘Whoa this is a really nice school.’ I was like, ‘Yeah, its new!’ and they said, ‘Yeah, I can sure see that!’ So, it’s pretty amazing here.”