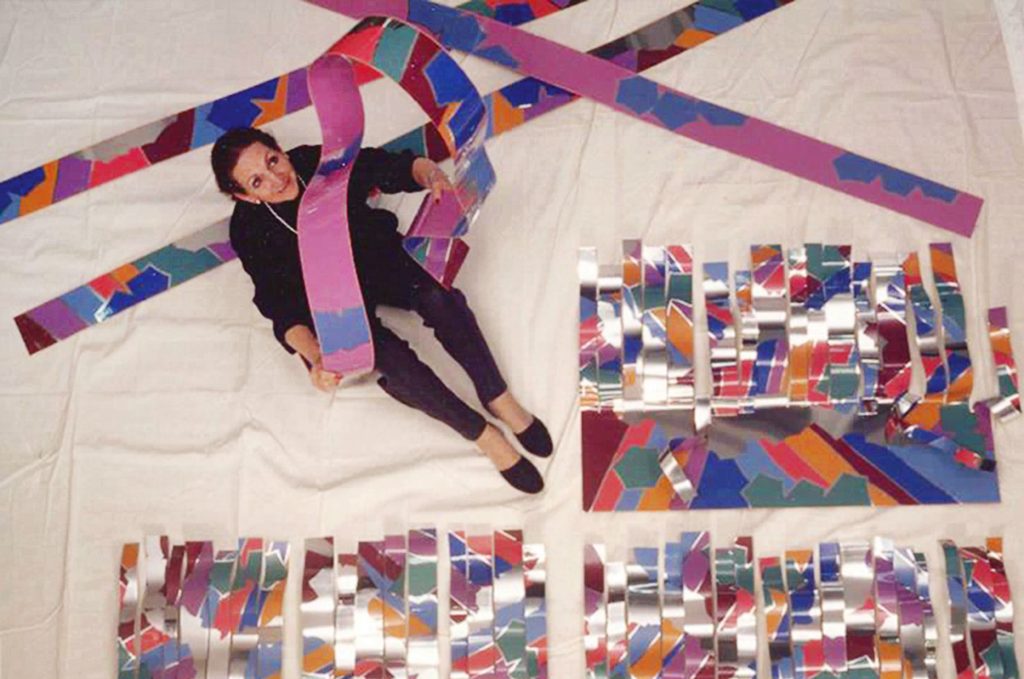 Standing in front of a Dorothy Gillespie piece brings to mind a wide variety of experiences, such as pulling the blade of a pair of scissors against a ribbon to create a loop, which magically seems to form the tendrils of a perfect bow. Or of rain parading down a steep brick wall, watching the droplets become characters of their own as they fall in a calculated motion.

These images are very different, and Gillespie wanted those who view her art to have those unique experiences as they spend time with her pieces.

“She never named her work specifically, she would call it something like Festival Two and Festival Three,” says her dear friend Tony Rivenbark. “She wanted it to speak to the person. If it looked like a quilt, if it looked like a field of flowers, that’s what it was.”

A native of Roanoke, Virginia, Gillespie earned a degree at the Maryland Institute College of Art before moving to New York City in 1943. She began to dabble in abstraction in the 1950s and ‘60s, later discovering her trademark medium — enamel-painted metal.

She was a pioneer in making her work accessible to more than art gallery patrons. She often installed her pieces in public places, including the 62-foot high “Celestial Joy” featuring 720 of her signature ‘bouquets’ in a parking garage in Orlando, Florida. From the Guggenheim to ballet stages, airports and Disney World’s Epcot Theme Park, Gillespie sought to enliven the experience of walking through a lobby or parking your car.

Gillespie’s son, Gary Gillespie Israel (president of the Dorothy M. Gillespie Foundation), wanted to celebrate what would have been his mother’s 100th year of life by placing her work in various locations across the U.S. where she had a connection. He reached out to Wilmington-based Frances Hawk, a longtime friend of Gillespie’s.

Hawk took on the role as organizer and involved like-minded community members in the process of bringing the celebration to Wilmington. Launched in June of 2020 and running through March, pieces from her 2003 Rockefeller Center Exhibit can be seen at the Cameron Art Museum (CAM), New Hanover County Arboretum, and the Wilson Center and Wilma W. Daniels Gallery at Cape Fear Community College. Her comprehensive traveling show is being installed at the Daniels Gallery in January 2021.

“What [Dale] Chihuly is to glass in terms of an art form, Dorothy was to metal,” Hawk says. “I just want people to appreciate what she wanted. She wanted people to feel happy.”

While predominantly based in New York City and Florida, Gillespie found ties to Wilmington through Rivenbark, the executive director of Thalian Hall. He worked at her New York studio in the 1970s, a time he describes as a transformative era. Then, having to fill the large student union at New York University on a very tight budget, she worked with paper.

“Paper takes on a mind of its own, it can cut you,” Rivenbark recalls Gillespie saying. “She did paintings on these giant rolls of paper. They’d come off the wall and they’d roll over. That was a very successful show. Because they were fragile, she began to think about how she could do the same effect. She began to experiment with different materials that led to the metalwork she did for 25 years.”

After Rivenbark relocated to Wilmington, he’d often host Gillespie as she traveled back and forth between her New York and Florida studios. Although artists of different mediums, Gillespie also formed a friendship with Wilmington painter Claude Howell.

In 1981, the former Deacon Gallery on Castle Street exhibited her work. The Wilmington-based St. Thomas Celebration of the Arts selected Gillespie as their featured artist in 1982. “Dorothy Gillespie: Reflections” was exhibited at CAM from 2005-06 and her piece “Beanstalk: Colorfalls I” is on permanent display at Thalian Hall.

Today, the CAM courtyard is dotted with towering totems painted in a vibrant base coat of turquoise and parakeet with calculated curls in geometric colors of fuchsia, red and azure. The smaller sunburst sculptures at the Arboretum seem to hover and grow from the pine straw. Gillespie’s work takes a traditional view of art into a three-dimensional body; even the paneled artwork possesses a cohesive personality all its own.

“It’s bright, colorful and playful,” says Heather Wilson, CAM’s deputy director of communications. “They bring a brightness of spirit to the museum, in the courtyard where they are displayed, but also inside the museum where you can see them through the windows in the café.”

Much like her work, a word frequently used to describe Gillespie is vibrant. Hawk recalls in the 1950s Gillespie and her husband, Bernard Israel, owned a nightclub that served as a gallery. Thinking of neon lights or the pulse of a beat then seeing Gillespie’s work seems to connect. There’s fun, and bursting patterns, but sometimes dark curves and mystery.

“Someone once said her art was like a lore in which no one got hurt,” Rivenbark says. “[There’s] such vibrancy, activity and energy.”

The sunbursts decorating the Arboretum might remind some of presents and bows twinkling among Christmas lights, one of the original places Gillespie found inspiration.

“What was influential to her as a child was looking at the Christmas tree, the lights, shininess, you can’t tell which is forward and which is backwards,” Rivenbark says. “Her work does the same thing, where you have all of these colors where one color is on top of the other and you don’t know which it is. That’s how she saw the world.”

Gillespie was born in 1920, the year the 19th Amendment passed, granting women the right to vote. In the 1970s, she was the artist in residence at the Women’s Interart Center in New York City. She found her voice by reforming the art world from within, helping women become more involved in the business of art, academia and management of galleries and museums.

As a central figure in the women’s art movement, she dedicated her time giving lectures and guest talks at institutions and universities across the U.S. She wanted to be seen as a serious artist and sought to inspire that same confidence in others.

While Gillespie’s work could be viewed as inherently feminine with bright colors and a sense of decor, there’s still a seriousness and stature. It’s a joyous way of interrupting a space that also says, “challenge me.”

To be both feminine yet imposing is intrinsically a female experience when one seeks to destabilize and reform societal norms and structure. It’s as if her pieces are not scared to take up space while maintaining an effervescence all their own.

One hundred years after her birth, Gillespie is still inspiring and teaching us today.