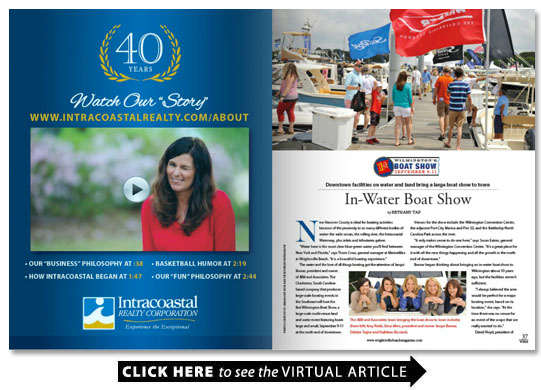 New Hanover County is ideal for boating activities because of the proximity to so many different bodies of water: the wide ocean the rolling river the Intracoastal Waterway plus inlets and tributaries galore.

“Water here is the most clear blue-green water you’ll find between New York and Florida ” says Thom Cross general manager at MarineMax in Wrightsville Beach. “It is a beautiful boating experience.”

The water and the love of all things boating got the attention of Jacqui Bomar president and owner of JBM and Associates. The Charleston South Carolina-based company that produces large-scale boating events in the Southeast will host the first Wilmington Boat Show a large-scale multi-venue land and water event featuring boats large and small September 9-11 at the north end of downtown.

Venues for the show include the Wilmington Convention Center the adjacent Port City Marina and Pier 33 and the Battleship North Carolina Park across the river.

“It only makes sense to do one here ” says Susan Eaton general manager of the Wilmington Convention Center. “It’s a great place for it with all the new things happening and all the growth in the north end of downtown.”

Bomar began thinking about bringing an in-water boat show to Wilmington about 10 years ago but the facilities weren’t sufficient.

“I always believed the area would be perfect for a major boating event based on its location ” she says. “At the time there was no venue for an event of the scope that we really wanted to do.”

David Floyd president of Wrightsville Beach-based Atlantic Marine says there used to be a show in Independence Mall “when everyone had small boats.” Dealers tried other venues when they outgrew the mall but were limited in size and facilities.

“If you look at the big international shows it’s a lot of boats and a lot of people ” says John Riggs of Bluewater Yacht Sales in Wrightsville Beach. “That’s what you have to orchestrate is the crowds.”

The opening of the Port City Marina in 2015 made it possible to attract a larger show. With 200 floating concrete wet-slips and the capability to accommodate boats up to 250 feet it was the ideal location for the in-water portion.

With the facilities in place the logistics were worked out and the dates set. The show will feature boats at the marina and boat displays marine industry exhibits and seminars within the Convention Center. Pier 33 and the Riverwalk will bustle with more than 70 vendors. Kids’ activities will be held at the Battleship North Carolina Park with Wilmington Water Tours taxiing attendees back and forth across the Cape Fear.

“You put so much money and time and energy and passion into creating something like this ” Bomar says. “It’s not just a one-day corporate event. You have to build trust with the vendors and attendees. It’s not just creating an event; you’re creating an experience.”

The experience includes live music food and water tours. But primarily it’s about the boats.

“Everyone in the area has been so excited about the show ” Bomar says. “The people in the industry have been talking about how they’ve wanted a show like this for years and years.”

Cross says MarineMax will have 14 boats on display.

“Our goal is to bring people in from all over the place who love boating and the coastal lifestyle ” he says.

“We’ll be in the water at the marina ” Floyd says. “That’s the exciting part of the show.”

Those in the industry generally agree that the biggest and best boat shows on the East Coast are in Florida at venues that have facilities indoors and on the water. Some suggest that the Wilmington Boat Show could rival those some day.

“As a dealer group we are excited about having this location to attract a group of people to look at our products ” Floyd says. “We hope it will continue to grow. It has the potential to be as big as the ones in Fort Lauderdale or Miami.”