Half a Century of Academic Excellence

BY Kamerin Roth and Simon Gonzalez 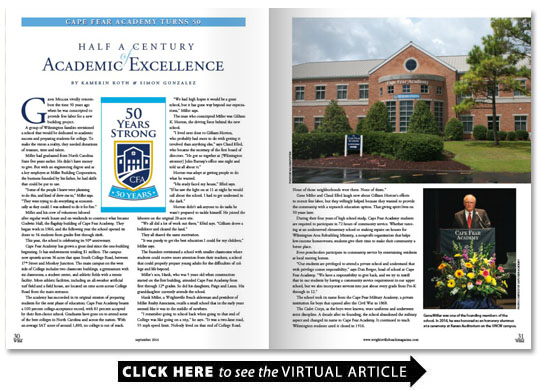 Gene Miller vividly remembers the time 50 years ago when he was conscripted to provide free labor for a new building project.

A group of Wilmington families envisioned a school that would be dedicated to academic success and preparing students for college. To make the vision a reality they needed donations of treasure time and talent.

Miller had graduated from North Carolina State five years earlier. He didn’t have money to give. But with an engineering degree and as a key employee at Miller Building Corporation the business founded by his father he had skills that could be put to use.

“Some of the people I knew were planning to do this and kind of drew me in ” Miller says. “They were trying to do everything as economically as they could. I was enlisted to do it for free.”

Miller and his crew of volunteers labored after regular work hours and on weekends to construct what became Godwin Hall the flagship building of Cape Fear Academy. They began work in 1966 and the following year the school opened its doors to 54 students from grades first through sixth.

This year the school is celebrating its 50th anniversary.

Cape Fear Academy has grown a great deal since the one-building beginning. It has endowments totaling $1 million. The campus now sprawls across 36 acres that span South College Road between 17th Street and Monkey Junction. The main campus on the west side of College includes two classroom buildings a gymnasium with six classrooms a student center and athletic fields with a tennis facility. More athletic facilities including an all-weather artificial turf field and a field house are located on nine acres across College Road from the main entrance.

The academy has succeeded in its original mission of preparing students for the next phase of education; Cape Fear Academy boasts a 100 percent college-acceptance record with 81 percent accepted by their first-choice school. Graduates have gone on to attend some of the best colleges in North Carolina and across the nation. With an average SAT score of around 1 800 no college is out of reach.

“We had high hopes it would be a great school but it has gone way beyond our expectations ” Miller says.

The man who conscripted Miller was Gilliam K. Horton the driving force behind the new school.

“I lived next door to Gilliam Horton who probably had more to do with getting it involved than anything else ” says Claud Efird who became the secretary of the first board of directors. “He got us together at [Wilmington attorney] John Burney’s office one night and told us all about it.”

Horton was adept at getting people to do what he wanted.

“His study faced my house ” Efird says. “If he saw the light on at 11 at night he would call about the school. I had to get undressed in the dark.”

Horton didn’t ask anyone to do tasks he wasn’t prepared to tackle himself. He joined the laborers on the original 20-acre site.

“We all did a lot of work out there ” Efrid says. “Gilliam drove a bulldozer and cleared the land.”

They all shared the same motivation.

“It was purely to get the best education I could for my children ” Miller says.

The founders envisioned a school with smaller classrooms where students could receive more attention from their teachers a school that could properly prepare young adults for the difficulties of college and life beyond.

Miller’s son Hank who was 5 years old when construction started on the first building attended Cape Fear Academy from first through 12th grades. So did his daughters Paige and Laura. His granddaughter currently attends the school.

Hank Miller a Wrightsville Beach alderman and president of Miller Realty Associates recalls a small school that in the early years seemed like it was in the middle of nowhere.

Gene Miller and Claud Efird laugh now about Gilliam Horton’s efforts to recruit free labor but they willingly helped because they wanted to provide the community with a topnotch education option. That giving spirit lives on 50 years later.

During their four years of high school study Cape Fear Academy students are required to participate in 72 hours of community service. Whether tutoring at an underserved elementary school or making repairs on houses for Wilmington Area RebuildingMinistry a nonprofit organization that helps low-income homeowners students give their time to make their community a better place.

Even preschoolers participate in community service by entertaining residents at local nursing homes.

“Our students are privileged to attend a private school and understand that with privilege comes responsibility ” says Don Berger head of school at Cape Fear Academy. “We have a responsibility to give back and we try to instill that in our students by having a community service requirement in our upper school but we also incorporate services into just about every grade from Pre-K through to 12.”

The school took its name from the Cape Fear Military Academy a private institution for boys that opened after the Civil War in 1868.

The Cadet Corps as the boys were known wore uniforms and underwent strict discipline. A decade after its founding the school abandoned the military aspect and changed its name to Cape Fear Academy. It continued to teach Wilmington students until it closed in 1916.

“Some of the founders for the new Cape Fear Academy are direct descendants of alumni from Cape Fear Military Academy ” says Susan Harrell the school’s director of communications. “Really the only link between the two schools is the name which was chosen to honor the families of the founders.”

Even as it has expanded over the past half century the school has stayed true to its original intentions with small classrooms and a 9- to-1 student-teacher ratio.

Academic success is just one component of how Cape Fear Academy defines its students’ achievements. Every pupil is involved in the fine and performing arts and 90 percent play at least one sport. Their championship athletic teams compete on both regional and national platforms and their award-winning theater department is the only high school program to perform at historic Thalian Hall.

School leaders cite trust and respect as the building blocks of their success. For 50 years they have nurtured individuality and talent in their students by giving them increased freedom and responsibility.

“We know that one of the hardest things for students to do is manage free time. And when they get to college they are submerged in more free time than maybe they have ever had before ” Harrell says. “So we let our students have unrestricted study hall time where they don’t have to sit down at a line of tables and report back to a teacher. It’s a lot of responsibility. They have to decide what to do with their free time and figure out how to balance play with hard work.”

The more than 1 430 CFA alumnus have proven themselves to be capable of just about anything.

Anna Echols who attended Cape Fear Academy for 14 years was a competitor on TLC’s Ultimate Cake Off. She now owns and operates One Belle Bakery in Wilmington.

“Cape Fear Academy taught me the value of building relationships with people ” Echols says. “At that time it meant relationships with fellow students and teachers. I carried that to college and made connections with students professors and other professionals. It wasn’t until college that I realized it was all networking. Once I decided what I wanted to do I felt like I had a huge support system behind me based on the relationships I had been building since my time in high school.”

While at CFA Echols was encouraged to explore her interests and started a baking club. She also was the vice president in charge of organizing community-service projects.

“I ended up continuing that when I got to college and became the president of the Meredith College Service Club ” Echols says. “At CFA I recall doing projects with the International Seaman’s Center Beach Sweep and Toys for Tots. Looking back on my experiences my favorite thing about CFA was the value they placed on not only education but also involvement in extracurricular activities from sports to theater to clubs. There was a big push to keep students active and gaining new experiences.”

Maddie Hasson is another graduate who turned an avocation she loved at the school into a profession. Hasson who spent her time at Cape Fear Academy on stage made her big debut as an actress in the Fox show “The Finder ” and costarred in the ABC Family series “Twisted.”

The alumni list also includes sons and daughters nieces and nephews and grandchildren of some of the original founders who take pride in the way the school has evolved.

“The growth has been phenomenal ” says Hank Miller who is a past president of the school’s board of directors. “The parents I know that have children are very satisfied with the education they’re getting there.”