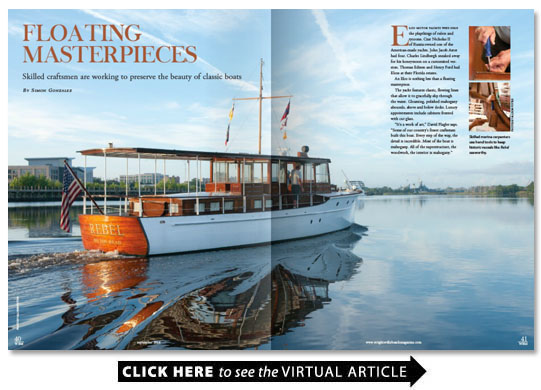 Elco motor yachts were once the playthings of rulers and tycoons. Czar Nicholas II of Russia owned one of the American-made yachts. John Jacob Astor had four. Charles Lindbergh sneaked away for his honeymoon on a customized version. Thomas Edison and Henry Ford had Elcos at their Florida estates.

An Elco is nothing less than a floating masterpiece.

The yacht features classic flowing lines that allow it to gracefully slip through the water. Gleaming polished mahogany abounds above and below decks. Luxury appointments include cabinets fronted with cut glass.

“It’s a work of art ” David Flagler says. “Some of our country’s finest craftsmen built this boat. Every step of the way the detail is incredible. Most of the boat is mahogany. All of the superstructure the woodwork the interior is mahogany.”

Flagler — former head of the Cape Fear Community College wooden boat building program — is a master craftsman with more than 30 years’ experience working on wooden boats. He was one of the co-builders of the Silver Chalice a reproduction of a 16th-century tender used by the original Roanoke Island colonists that is on display at Roanoke Island Festival Park in the Outer Banks. He was part of a team that built a customized boat for Walter Cronkite.

The 62-year-old is now in semi-retirement from boat carpentry concentrating instead on running his business which provides recycling systems to clean up wastewater from marinas and boatyards. But when a nearly 90-year-old Elco sailed into Wilmington he couldn’t pass up this chance to pick up his tools again.

“I just love working on these classic wooden boats ” Flagler says. “Boats are some of the most beautiful objects man has made. Part of it is that there’s nothing straight there’s nothing square. Even the tops of the doors are angled. Your eye picks up on these curves.”

The craft he’s working on is a 48-footer called Rebel which was built in 1928 at the Elco yard in Bayonne New Jersey. Jon and Andrea Hammond the South Carolina-based owners brought the vessel to Wilmington where it is berthed at the Bennett Brothers Yachts dock at Cape Fear Marina north of the Isabel Holmes Bridge.

“I’m the contractor on this boat ” Flagler says. “Bennett Brothers Yachts is going to work on the systems go through all the electrical and the plumbing the mechanical do the work on the engine. They will make sure that everything is up to snuff. I think it’s a feather in the cap of the marine trades in Wilmington that they could have it worked on anywhere and brought it up here.”

Flagler is replacing pieces that have been subject to wear and tear over nearly 90 years repairing collision damage and sprucing up the interior.

“It’s an honor ” Flagler says. “I want to do as good a job as the guys who originally built the boat. I want them to be smiling down on me not wanting to throw a lightning bolt down at me.”

The opportunity to work on classic wooden boats is what excites craftsmen like Flagler and Richard Reid.

Reid recently replaced the keel and the bottom timbers in the Sylvia II a 1934 Core Sound fishing boat built in Morehead City at his shop off Market Street in Wilmington. Sylvia II was then moved to a larger space to receive new planking stern and flooring.

Reid’s current project is a replica of a 1940s-era John Alden designed Indian sailboat. The bulk of the 21-foot boat is fiberglass made from a mold from an original wooden Indian that Reid owned with his father. Reid is adding teak sole and mahogany trim.

Reid who grew up sailing wooden boats in Massachusetts has been in the boat building and repair business for about 40 years. Creating a fiberglass replica helps pay the bills but it’s working with wood that gets him excited.

“It’s close to my heart ” Reid says. “A wooden boat captures the imagination. A lot of people think it’s charming. There’s a lot more beauty to a wooden boat.”

His passion is obvious when he goes into great detail to discuss the challenge and the reward of getting the angle just right on the mahogany trim.

“I think a source of interest in the wooden boats is getting back to the beauty of the wooden trim ” he says. “This is a perfect piece of mahogany. It’s going to be beautiful.”

One of his favorite projects is the Ada Mae a skipjack built in 1915 in Rose Bay North Carolina. Carolina Coastal Classrooms acquired the boat in 2003 for the nonprofit group’s sailing fishing and environmental education programs. Reid and coworker Tom Butler have been to New Bern a few times to make repairs including during the spring of 2015 when Coast Guard inspectors mandated major work.

“We worked on it for about five weeks rebuilding the centerboard ” Reid says. “I’m always glad to save a wooden boat like that.”

Saving or renewing the beauty of the wooden boats is an art form practiced by craftsmen who wield their tools like painters might use their brushes.

“It calls for a lot of traditional tools that not everybody knows ” Flagler says. “There’s not so many of them around anymore. Some of the tools are specialized to boats. The average carpenter wouldn’t have a spokeshave for instance. If you have a curved piece of wood you needed to straighten out you’d use a spokeshave.”

Original plans don’t exist for many of the older boats so the carpenters have to use their imagination and exercise creativity.

“This is more like industrial art ” says Adrian Dobson a graduate of the Cape Fear program. “A lot of it is using your eyes as you would with any kind of art. In painting or drawing you are using your eyes more than any other tool. You’ve got your medium your paint and your brushes whatever your tools are. For us our tools are chisels and planes and our eyes.”

Under the supervision of Mark Bayne the current head of the program at Cape Fear Dodson and fellow Cape Fear alumnus Chris Sargent have taken over the work on Sylvia II.

“There definitely is a sense of nostalgia ” Sargent says. “A lot of these parts have been on the boat for 80 years and have withstood everything this boat has been through. This boat has sunk it was in World War II it was in the postal service. There’s a lot of history with it.”

The Sylvia II was a functional fishing boat when it was built in 1934. Now it is viewed as a beautiful piece of history worthy of being saved. Owner Bob Graham a Bald Head Island resident says it is the oldest commercial and charter fishing boat left in North Carolina.

“It was built as a workboat and they threw it together as a workboat ” Dobson says. “But it’s stood the test of time. It’s worth reconstructing. You can get another 80 years out of this boat or more.”

Graham bought Sylvia II from former owner Bob Simpson who had unsuccessfully tried to place it in a museum.

“I said ‘I’ll restore it ‘” Graham says. “I had no idea the extent of work it needed. But once you’re into it you either finish it or you trash it.”

He didn’t just do it out of an altruistic impulse. Like the men who work on them Graham has had a long love affair with wooden craft.

“It’s just something I’ve been messing around with for years ” he says. “I’ve always been fascinated with wooden boats and the skills involved in maintaining them. I fell in love with Concordia yawls wooden sailboats. I was looking for one I could restore.”

He didn’t find a sailboat but he did find the oldest fishing boat on the North Carolina coast. Sylvia II has been a fixture up the coast from Wilmington. Graham calls her an icon in Morehead City and Sargent says she was the queen of the Beaufort wooden boat show for years.

Yet Graham brought her to the Port City for an overhaul.

“I thought they were going to hang me when I brought it to Wilmington ” he says.

One reason was the relatively short commute from Bald Head Island would allow him to check on the progress. Another was the presence of skilled craftsmen like Reid.

“There are very few people with that kind of knowledge and skills ” Graham says. “Finding someone like Richard Reid was not easy to do. Those folks are few and far between. It’s kind of a lost art.”

The number of craftsmen might be dwindling but the art is still alive because it is passed on from generation to generation.

Flagler learned the trade from Geoff Scofield a master boat builder from England who was teaching at the Hampton Marine Museum — the predecessor to the North Carolina Maritime Museum — in Beaufort.

Flagler in turn passed on the trade by running the boat building program at Cape Fear Community College for almost 10 years. He then became the director of a new marine education center at Honolulu Community College for six years and was a founding director and wrote the curriculum for the North Carolina Marine Training and Education Center in Morehead City.

The craft has been passed to people like Sargent and Dobson both Cape Fear graduates. As they work on Sylvia II there is an element of fighting to keep the old ways alive in a disposable society.

A quote from American poet Kenneth Rexroth prominently displayed in the shop sums up their philosophy: “Against the ruin of the world there is only one defense: the creative act.”

“There’s a lot of time and effort and passion and love that has to go into it to do it right ” Sargent says. “We’re trying not only to make sure it’s seaworthy and structural but to be true to what it was. There’s tons of things that we could do to kind of cheat. We could use modern techniques. But it wouldn’t be the same. We’re trying to keep the traditions alive.”