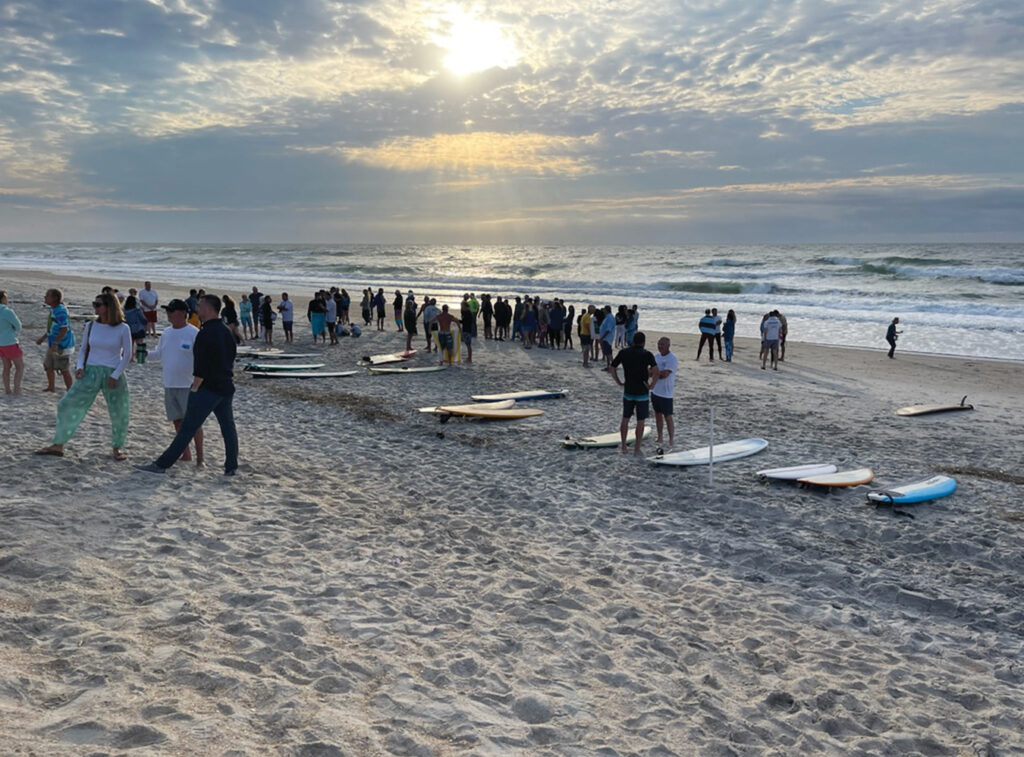 A paddle out to celebrate Kevin’s life was held on June 5, 2022 at sunrise in front of the Surf Club, Wrightsville Beach. An estimated 200 attended, including at least four of his TKE fraternity brothers. Approximately 40 participated in the paddle out itself. Photo by Pat Bradford

Kevin Walker, a beloved member of the Wrightsville Beach community, lost his courageous battle with prostate cancer on May 24, 2022. He was 66. He was born into a U.S. Marine family in Craven County, North Carolina, and made Wrightsville Beach his home since 1973.

His was a true entrepreneurial story.

At the University of North Carolina Wilmington, a member of the Tau Kappa Epsilon (TKE) fraternity studying marine biology, Kevin began working at Atlantic Diving & Demolition. On a job, he met a young man who was fresh out of high school. Mike McCarley would become his best friend and business partner for 48 years.

Kevin and Mike were captivated by marine construction and together took control of the company in 1978. The following year, they purchased a dive shop on Causeway Drive, Undersea Sales and Engineering, where they operated local dives off the coast.

In the early 1980s, they prepared and sunk two tugboats, the Socony 8 and the Stone Brothers, three miles off Wrightsville Beach that provided artificial reef sites for the N.C. Department of Marine Fisheries.

They changed the business name to Atlantic Diving & Marine Contractors in 1986, focusing solely on commercial projects. They welded bridges and did other underwater work while wearing commercial diving suits and being submerged for hours at a time, in sometimes freezing water and zero visibility.

Their burgeoning commercial marine construction business took them around the United States.

Success grew with a contract to rebuild 51 tank bridges for the military in Georgia.

Their first venture into the shipping business was berthing the Maritime Administration Ready Reserve Fleet on property they owned on the west bank of the Cape Fear River, just south of the Cape Fear Memorial Bridge.

In 1998, they began working on the Shell Island Dune reconstruction project, and when Hurricane Floyd hit in 1999 they were instrumental in the move to save the north end of Wrightsville Beach by installing a Geotube repair bag wall. Later they installed hundreds of feet of steel sheet metal pile in the construction and reopening of the newly dug, relocated Mason Inlet.

They moved into property investments, and purchased 19 acres on River Road, just south of the state port in Wilmington. In 2003, they created a privately owned port, Carolina Marine Terminal, on site.

In 2004, they extended the Banks Channel pier for the Wrightsville Beach U.S. Coast Guard Station and installed a floating dock. In 2013, they transported the historic Palmgren-O’Quinn house on a barge from Harbor Island en route to its home on the Wrightsville Beach Historic Square, where it would become the southeast office and education center for the N.C. Coastal Federation.

In 2016 Kevin was inducted into the Wrightsville Beach Waterman Hall of Fame as the Diving and Local Hero. In 2019 the Friends of Wrightsville Beach named Nov. 9 as Kevin Walker Appreciation Day. The partners sold Carolina Marine Terminal in May 2020.

Always an adventurer in life and business, Kevin was an avid motorcyclist and surfer, traveling the world with friends and family in pursuit of roads and waves less traveled.

His thirst for exceptional surf led him to Costa Rica in the early ’90s.  He fell in love with the country and people, building a second home in Nosara, where he and his wife, Tina, were married on Nov. 24, 2021.