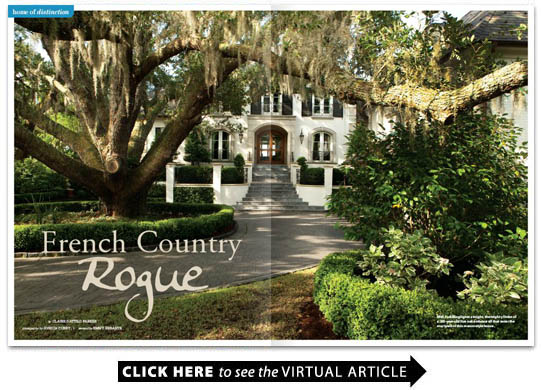 Marie Antoinette meets Ernest Hemingway in this stunning retreat where the gentle tides of Bradley Creek meet the Intracoastal Waterway in a perfect marriage of opulent femininity and masculine vigor. It is both a temple of hunt and sanctuary of style that took four years to complete yet it looks as though it has been gracefully aging as long as the 200-year-old oak that holds court in its garden.

“It truly is a magical home ” the owners say.

The French Country style manor was the vision of a couple with four children two still at home their residential designer Scott Sullivan and interior designer and friend Sherry Black.

The dcor is a balance of male and female energies in their boldest forms a giant moose head hangs above a tufted fringed ottoman where teenagers snack in front of a fireplace.

“We wanted French Country with a traditional Southern twist ” says the lady of the house which is why you will see Louis XIV furniture paired with a perfectly mounted wild turkey. Big African game water buffalo and zebras and American bears and waterfowl are literally nestled amid plaster ceilings and placed within the context of a gallery of artwork that ranges in style from pieces created by the couples children to originals by Wilmingtons famed outsider artist Minnie Evans to Cubist masters. The collection is a hobby that Black encourages her clients to embrace.

“The stairwell has become a gallery ” Black says and the owners plan to continue hanging art as the collection grows.

The overall effect is both robust and delicate. From the Habersham-inspired kitchen to the gentlemans bar and game room downstairs the interior does not feel off limits or untouchable. Instead it is warm inviting and familial as if it had evolved for generations.

“It lives very cozy ” the owner says “and that is what I am all about.”

First reclaimed woods salvaged and stored by the owners were repurposed in architectural details and cabinetry beams and bookcases that add a third dimension pulling the scale of the rooms into an intimate focus warmed with 100-year-old timbers hand hewn into arching beams wormy chestnut and solid walnut wall panels with two-inch solid walnut floors throughout. Artisan-designed ironwork is a decorative and functional element that links indoor stair rails to outdoor spaces patios and balconies.

“We got to do everything I ever dreamed of and they gave us that privilege to showcase impeccable workmanship ” Black says.

The collaboration of woodworkers lighting experts draftsman contractors engineers painters and a host of other professionals turned out a home that is not only gorgeous to look at but is also practical as sound as a hurricane shelter.

When building the foundation the pilings were driven 80 feet deep Black says so the ground floor main floor and upper levels are set on enough concrete to anchor a skyscraper. The stucco exterior slate roof and copper guttering encasing the house are timeless attributes that echo true construction.

Even the old live oak tree received the white glove treatment. It was the selling point for the owners and they took every step possible with a tree doctor on call to ensure its branches roots and life stayed strong in between those years of heavy construction. When the owners moved into the house two years ago Black had numerous boxes of lights strung around the old oak for a Christmas party. The lights remain on the tree today because as she says “it creates such a memory that you never forget.”

But its what lies beyond the tree the walls and the foundation that makes this house a home.

The master bedrooms his and her closets his with ample space for boots hats shirts and pants hers with more than ample space for four seasons worth of vanities; the master suite doorknobs engraved with the owners monogram; and the Jack-and-Jill bathrooms are individualized with sleek marble for him and quilted tiles a diamond-shaped toilet and a soaking tub for her.

Black says not one space was left untouched by someones opinion idea or creative concern. Unused storage space was revamped for a concession stand in the childrens game room; a guest bath includes a spa for out-of-towners and extensive back rooms on the ground floor were split into work areas for hunters fishermen boaters and of course the fun part entertaining.

The perimeter of the house is banked by rows of windows and doors open to the view and the entire south elevation overlooks the water. From here one can walk to the pool black with mother-of-pearl accents to mimic a true pond and beyond along the open-sided dock through the marsh grass to a seating area on the creek.

It is here looking back at the house that you realize the traditional elements of timeless design reign and think about having your cake and eating it too.

Resources Creating this home of Distinction