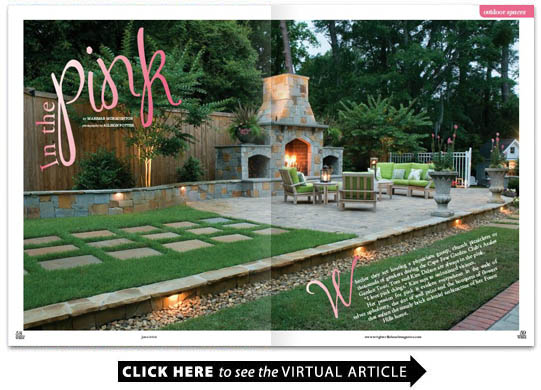 Whether they are hosting a physicians group church picnickers or thousands of gawkers during the Cape Fear Garden Clubs Azalea Garden Tour Tom and Kim Dalton are always in the pink.

Her passion for pink is evident everywhere: in the wale of velvet upholstery the tint of wall paint and the bouquets of flowers that soften the stately brick colonial architecture of her Forest Hills home.

Where the circular drive slopes to opposite sides of a rolling green lawn the man of the house comfortable amid this rash of pink pigment Tom Dalton welcomes guests.

“We want to make you smile ” he says.

Beyond him the columned portico leads to the interior entry hall and formal living room and rotunda providing a convenient way for guests to travel across the threshold back into the outdoors where the backyard beckons.

When the rotundas French doors fly open the crowd surges into an outdoor foyer. The sound of trickling water cascades over the rim of a tiered fountain that features three children skipping round a muse. The outdoor foyer flows toward an outdoor living room.

Tom stacks logs in the grate and quickly builds a fire with the built-in gas starter. Trailing across grassy paths stepping over stamped concrete or placed pavers guests spread in all directions into the outdoor living room toward a covered dining room the lap pool and the putting green.

When they are not entertaining Tom and Kim reserve the outdoor living room to enjoy what they call couch time a 15-minute ritual spent engaged in quiet conversation without the children.

This is a fitting place for Tom to say that he and Kim were high school sweethearts. Their courtship began in 5th grade when he asked her to go steady then marry him.

“Communication is a huge deal for us ” Tom says.

Following high school graduation in Springfield Missouri college and career scattered the couple to urban destinations like Boston where Tom an anesthesiologist interned at Massachusetts General Hospital then finally Seattle before the Daltons moved to Wilmington with the first two of their three children in 1996 and bought a house down the street.

But their dream house built in 1948 by Ivan Jones was only several blocks away. One of its prime selling points was a 2 000-square-foot indoor pool that later became obsolete. Besieged by hurricane rains after they bought the house in 1999 the pool and its moldy residue had to go.

The extensive backyard renovation began in 2002 with a demolition led by Jim Stone. Conducting the renovation in stages including Plantation Builders design and construction of a two-story addition that provides a second-floor master bedroom suite the pool was finally re-dug in 2004. For four years the Daltons stared into a muddy hole. The project was completed in 2010.

On the old pools footprint Kim chose the look she wanted for the lifestyle her growing family relished while Tom sought behind-the-scenes low-maintenance solutions to support it. The Daltons fed their ideas to Reid Kornegay of Kahili Pools Sheri Chisholm of Flora Landscaping and Mike Gray of Stoneworks.

A section of the original pools exterior brick wall also painted white is the backdrop for an array of tropicals Knock Out roses hibiscus and loquat trees. The loquat is a perfect choice for this setting Tom explains because it does not drop its leaves.

Along this hard edge water cascades from a low stone retaining wall from one of three fountains. The falling water creates textured patterns devised by Kornegay. If desired the pool water is heated and when storms are predicted the pools automated cover simultaneously shuts off the fountains.

Wire mesh lounge chairs tables and dining chairs are arranged around the pool. The crumbled shell concrete helps cool bare heels in the hottest of summer months. The pool is edged with removable stone pavers that ease debris removal once a year.

One of the projects biggest challenges was drainage Tom says.

“Water trapped in was filling up the backyard ” before they started.

But Chisholm built French drains around the pools periphery one of a web of onsite attempts to recycle water electronically or return it to the soil to percolate the landscape. By elevating the site three feet rainwater and runoff is forced to drain to other areas of the property. Planters and beds are automatically irrigated; every fountain is refilled from a reservoir. One is fed from the homes sump pump into which the air conditioning system drains.

On the south lawn the removal of some tall pines and a blanket of old-growth azaleas have been replaced by a glade of cedar trees. When mature the cedars will buffer the sound of passing traffic. The hush will fall over the synthetic turf putting green around which Chisholm arranged nightlights that pool in circles.

On the course Tom wagers the bedtime hour with younger son Miller.

“If he wins he stays up an hour later ” Tom says.

Tucked into the corner of the Daltons backyard is a two-story antebellum-style playhouse designed and built with his grandchildren by Kims father. Completed with window boxes the interior is swagged with pink gingham window treatments stitched by Kims mother.

Furnished with child-sized chairs and a table set for tea the playhouse loft is carpeted for sleepovers. With elder son Conner at Harvard and daughter Mackenzie a teenager preoccupied poolside Miller is heir to the playhouse. At 10 hes almost old enough to host a playhouse slumber party Kim says.

If hes a true blue Dalton man hell have to get used to pink walls and all.