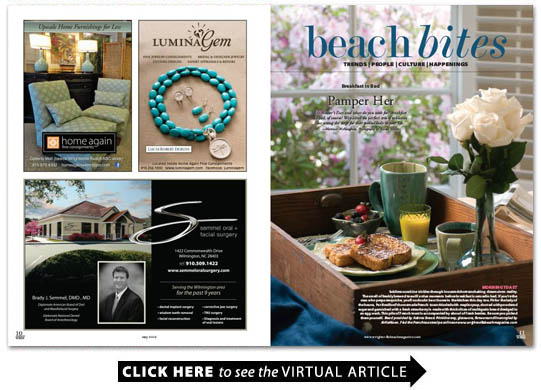 Breakfast In Bed: Pamper Her
Its Mothers Day and what do you wish for? Breakfast in bed of course! We paired the perfect trio of tableaux for setting the stage for that special lady in your life. Marimar McNaughton Photography by Allison Potter 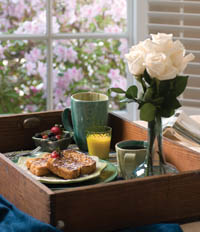 Morning Toast
Sublime sunshine trickles through louvered shutters shaking dreams into reality. The smell of freshly brewed tea will arrive moments before breakfast is served in bed. If youre the man who prepares quiche youll no doubt be at home in the kitchen this day too. Fit for the lady of the house Pat Bradfords homemade French toast drizzled with maple syrup dusted with powdered sugar and garnished with a fresh strawberry is made with thick slices of multigrain bread dredged in an egg wash. This pile of French toast is accompanied by a bowl of fresh berries. Be sure you picked them yourself. Bread provided by Atlanta Bread. Primitive tray glassware flatware and linen styled by Airlie Moon. Find the French toast recipe online on www.wrightsvillebeachmagazine.com 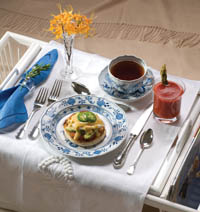 Boudoir Benedict
The romantic Romeo who wants to surprise his dear heart with breakfast in bed should consider this heart-smart version of the timeless classic eggs Benedict. This delish dish is a twisted jalapeno Benedict composed of toasted English muffins stacked with two traditional poached eggs on a bed of sliced fresh tomatoes and wedges of avocado smothered in jalapeno hollandaise. Garnished with slivers of crisp jalapeno peppers straight tomato juice with spears of asparagus are guaranteed to put the fire out. This is one morning of the year cheating is allowed. Eggs Benedict provided by Barista Caf and Bakery. Bed tray china glassware flatware linens and textiles styled by Protocol. 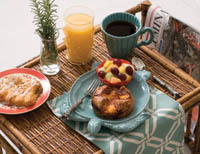 Family Feast
For the dad who doesnt cook consider sneaking the kids out of the house while Mom sleeps in. If the young ones do the choosing there is certain to be a gracious plenty for all to share. This breakfast in bed includes a four-cheese souffl fresh cut tropical fruit and a heavenly bear claw. When growling tummies crawl under mamma bears covers hoping for a bite of this hearty morning feast Mom wont mind will she? After all its the thought that counts. Pastry souffl and fruit provided by Panera Bread. Bed tray plateware pottery glassware flatware and linen styled by The Fishermans Wife.

It started in Charlotte North Carolina with 13 girls. Molly Barker created Girls on the Run in 1996. Her 10-week nonprofit after-school program teaches and inspires girls to be healthy and confident through running. Now 16 years later GOTR has expanded its reach to more than 174 locations in the U.S. and Canada.

This month girls and boys will be running and striding through midtown Wilmington during the annual OrthoWilmington 5k on Saturday May 19.

Coastal Carolina GOTR was established in 2003 and was initially funded by a grant through 2007. The Wilmington Family YMCA stepped in as an affiliate program partner in 2008 under the direction of Margie Butts who now serves as race day director.

When the Y first became an affiliate Butts says there were only three schools involved. This year the Coastal Carolina GOTR includes 14 counties within the Wilmington Family YMCA Harrison Family YMCA Goldsboro YMCA and YMCA of the Sandhills. Director Amber Rogers says program participation has doubled since last year. Now 128 teams strong with 15 girls each the program reaches 1 920 girls.

If your childs school does not have GOTR or STRIDE programs contact council director Amber Rogers by calling 910-251-9622 ext. 224 or emailing [email protected] Parents teachers and fellow runners who would like to learn about coaching donating or competing in the races should visit www.nckidsrun.org.

Local Voice: The key to success
Marva Mapson Robinson is on a mission to inspire others with music

Music is my main reason for being I know why Im here ” says Marva Mapson Robinson with a smile. Since retiring from teaching music in public schools she has not missed a beat. When it comes to the inspiration she radiates through her music. Robinson is a leader in many organizations: the DREAMS Center for Arts Education her sorority Delta Sigma Theta Sorority Inc. the local Wilmington chapter of the Links Inc. the Williston Alumni Community Choir and the Wilmington Symphony.

“I have always been impressed with Steven Errante and his ability to bring the community together ” Robinson says of the Wilmington Symphonys conductor. She aspires to do the same and uses her faith and love of music to help her on her mission.

Music has always played a large role in Robinsons life. She began piano lessons at age six and played at the church in the small town of Navassa a rite of passage she often mentions. Then in elementary school under the tutelage of Ms. Harris the director of rhythm band and glee club Robinson discovered that she was a powerful singer. She pursued her passion throughout middle and high school and went on to major in Music Education in college.

“The arts have a way of telling us we are all human ” Robinson says. “Be it music dancing singing painting drawing acting we are all children of God.”

Being able to utilize her gifts while teaching in public schools helped Robinson realize how much of an inspiration she could be. She once ran into a former student Alvin in the grocery store. Alvin she says had struggled through school but due to his immersion in music focused on the positive. When introducing her Alvin told his wife that Robinson saved his life.

“You never know the impact you have on people ” Robinson says. “How you live and having high expectations makes a huge difference in their lives.” Amanda Wager

Kristin Gibson fell in love with textiles during her first college art class and has been using color as her choice subject since. A sunny day in her backyard with a variety of household items and hardware store gadgets is all she needs to begin crafting her silk scarves.

“These scarves are kind of like my sketch book ” she says. “I study the colors.”

At a very young age she began taking art classes.

“My mother knew art was where I would excel ” Gibson explains.

She has been a painter her entire life and uses the same approach when it comes to her silks. She mixes a soy-wax resist that inhibits the fabric from absorbing the colored dye into her pigments to create a paint-like consistency allowing more control over how the color settles into the fabric.

On a piece of white silk that has been stretched between two sawhorses Gibson stamps the textile with a hand-carved wooden block coated with the resist leaving traces of patterns in the background of the silk. After the resist dries Gibson adds layers of color letting each layer dry before beginning the next.

“The interesting thing is getting all of the different layers and nuances as it dries ” she says.

She enjoys creating textures on her scarves by using different items like Styrofoam or large ice cream salt crystals to create patterns. The salt is reused multiple times absorbing colors and redistributing them in new ways.

After the process feels finished usually after three or four layers have been completed the scarf is left to dry. To set the color Gibson rolls the silk in newspaper and foil and steams it in her kitchen. After the silks are steamed they are washed and taken outside to dry. The final product is ironed before merchandised as a brilliantly colored wearable art statement. Amanda Wager