For the Love of Wilmington 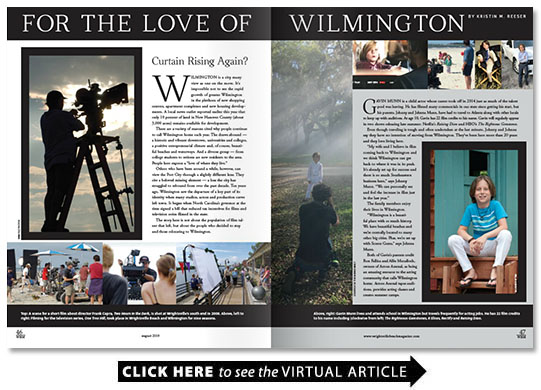 Wilmington is a city many view as one on the move. It’s impossible not to see the rapid growth of greater Wilmington in the plethora of new shopping centers apartment complexes and new housing developments. A local news outlet reported earlier this year that only 10 percent of land in New Hanover County (about 3 000 acres) remains available for development.

There are a variety of reasons cited why people continue to call Wilmington home each year. The draws abound — a historic and vibrant downtown universities and colleges a positive entrepreneurial climate and of course beautiful beaches and waterways. And a diverse group — from college students to retirees are new residents to the area. People here express a “love of where they live.”

Others who have been around a while however can view the Port City through a slightly different lens. They cite a beloved missing element — a loss the city has struggled to rebound from over the past decade. Ten years ago Wilmington saw the departure of a key part of its identity when many studios actors and production crews left town. It began when North Carolina’s governor at the time signed a bill that reduced tax incentives for films and television series filmed in the state.

The story here is not about the population of film talent that left but about the people who decided to stay and those relocating to Wilmington.

pool was leaving. He has filmed many commercials in our state since getting his start but his parents Johnny and Johnna Munn have had to travel to Atlanta along with other locals

to keep up with auditions. At age 10 Gavin has 22 film credits to his name. Gavin will regularly appear in two shows releasing late summer: Netflix’s Raising Dion and HBO’s The Righteous Gemstones.

Even though traveling is tough and often undertaken at the last minute Johnny and Johnna say they have no intention of moving from Wilmington. They’ve been here more than 20 years and they love living here.

“My wife and I believe in film coming back to Wilmington and we think Wilmington can get back to where it was in its peak. It’s already set up for success and there is so much Southeastern business here ” says Johnny Munn. “We can personally see and feel the increase in film just in the last year.”

The family members enjoy their lives in Wilmington.

“Wilmington is a beautiful place with so much history. We have beautiful beaches and we’re centrally located to many other big cities. Plus we’re set up with Screen Gems ” says Johnna Munn.

Myke Holmes is an American TV and film actor who has called Wilmington home for close to 20 years. Holmes had a role in numerous Wilmington projects when film was booming here including One Tree Hill Revolution Under the Dome Sleepy Hollow Secrets and Lies A Short History of Decay Adrenaline and Nicholas Sparks’sThe Longest Ride.

Since film moved away Holmes also has traveled to appear in The Walking Deadand the 2018 filmMile 22 and most recently the new Kendrick Brothers movie calledOvercomer which hits theaters Aug. 23.

Holmes has continued to keep his roots planted in Wilmington because he says he likes the great laid-back but energetic beach town lifestyle without the muck of a big city.

“Wilmington is an ideal place to raise a family and still be within 500 miles of Atlanta — the place where much of our film has relocated to in the last 10 years ” he says.

Holmes also teaches acting at the University of North Carolina Wilmington. He touts UNCW as a great resource for students looking to pursue acting. He said he’s constantly inspired by all the young eager artists he has the privilege to teach. Through his acting and teaching roles he says he hears whispers about more activity trickling back.

Perhaps the most telling tale of love for Wilmington is not from the people who have lived in the city for a long time or recently found residence but from those who have been employed in the industry and continually found their path bringing them back.

Charlotte Oden is a freelance artist and designer who graduated from the Savannah College of Art and Design in Georgia. She’s moved and worked between Savannah Wilmington and Greensboro. Oden got her start in Wilmington in 2014 as the art department production assistant on the Nicholas Sparks film The Longest Ride. Since then her livelihood has required her to travel but she keeps finding her way back to Wilmington. “I think more actors will continue to do the same as film continues to come back to the area ” said Oden.

She believes Wilmington is about to be busy again because people love to work in the area. She says Wilmington is close to a variety of shooting locations it has a friendly local environment a talented local crew and sound stages.

Most recently Oden’s career path brought her back to Wilmington as a set costumer for the production Uncle Henry’s.

Because of Wilmington’s growth as a city new actors are beginning to call Wilmington home as well.

Brian Durkin is an American TV and film actor. He and his family arrived in 2018 because his good friend raved about living in Wilmington and Durkin felt his family’s quality of life would be better in Wilmington than in Atlanta or Los Angeles.

He says he believesthe film industry is returning to Wilmington and that it will continue to do so. “I’ve actually already started seeing it ” he says.”In the past three months I’ve probably read for four projects being shot in and around Wilmington.”

He’s banking on film returning and he’s willing to do everything he can to play a part in it. Since moving here late last year he has started a Wilmington-based production company with Anthony Reynolds who is also a Wilmington actor.

Durkin has participated in more than 40 projects in the last eight years including working with five Oscar winners. Most recently he played a cop in John Lee Hancock’s Netflix film The Highwaymen. He also appeared as a police officer in the remake of the 2018 movie Superfly.

The curtain has yet to rise on what the next decade will bring to the local film industry but one thing seems sure: The talent pool’s love and commitment to Wilmington runs deep.