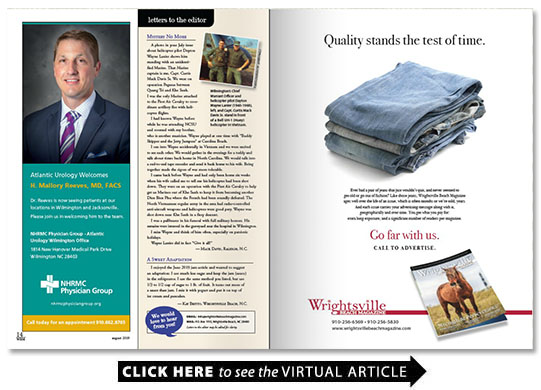 A photo in your July issue about helicopter pilot Dayton Wayne Lanier shows him standing with an unidentified Marine. That Marine captain is me Capt. Curtis Mack Davis Sr. We were on operation Pegasus between Quang Tri and Khe Sanh. I was the only Marine attached to the First Air Cavalry to coordinate artillery fire with helicopter flights.

I had known Wayne before while he was attending NCSU and roomed with my brother who is another musician. Wayne played at one time with “Buddy Skipper and the Jetty Jumpers” at Carolina Beach.

I ran into Wayne accidentally in Vietnam and we were excited to see each other. We would gather in the evenings for a toddy and talk about times back home in North Carolina. We would talk into a reel-to-reel tape recorder and send it back home to his wife. Being together made the rigors of war more tolerable.

I came back before Wayne and had only been home six weeks when his wife called me to tell me his helicopter had been shot down. They were on an operation with the First Air Cavalry to help get us Marines out of Khe Sanh to keep it from becoming another Dien Bien Phu where the French had been soundly defeated. The North Vietnamese regular army in the area had radar-controlled anti-aircraft weapons and helicopters were good prey. Wayne was shot down near Khe Sanh in a fiery descent.

I was a pallbearer in his funeral with full military honors. His remains were interred in the graveyard near the hospital in Wilmington.

I miss Wayne and think of him often especially on patriotic holidays.

Wayne Lanier did in fact “Give it all!”

I enjoyed the June 2019 jam article and wanted to suggest an adaptation: I use much less sugar and keep the jam (sauce) in the refrigerator. I use the same method you listed but use 1/3 to 1/2 cup of sugar to 1 lb. of fruit. It turns out more of a sauce than jam. I mix it with yogurt and put it on top of ice cream and pancakes.

We would love to hear from you:

Letters to the editor may be edited for clarity.