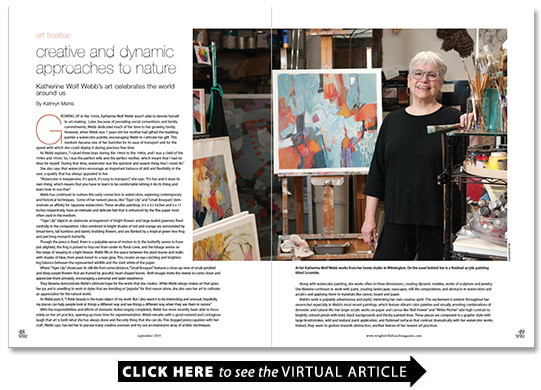 Katherine Wolf Webb’s art celebrates the world around us

Growing up in the 1950s Katherine Wolf Webb wasn’t able to devote herself to art-making. Later because of prevailing social conventions and family commitments Webb dedicated much of her time to her growing family. However when Webb was 7 years old her mother had gifted the budding painter a watercolor palette encouraging Webb to cultivate her gift. This medium became one of her favorites for its ease of transport and for the speed with which she could deploy it during precious free time.

As Webb explains “I raised three boys during the 1960s to the 1980s and I was a child of the 1940s and 1950s. So I was the perfect wife and the perfect mother which meant that I had no time for myself. During that time watercolor was the quickest and easiest thing that I could do.”

She also says that watercolors encourage an important balance of skill and flexibility in the user a quality that has always appealed to her.

“Watercolor is inexpensive it’s quick it’s easy to transport ” she says. “It’s fun and it does its own thing which means that you have to learn to be comfortable letting it do its thing and learn how to use that.”

Webb has continued to nurture this early connection to watercolors exploring contemporary and historical techniques. Some of her newest pieces like “Tiger Lily” and “Small Bouquet ” demonstrate an affinity for Japanese watercolors. These smaller paintings 9.5 x 9.5 inches and 6 x 11 inches respectively have an intimate and delicate feel that is enhanced by the fine paper most often used in the medium.

“Tiger Lily” depicts an elaborate arrangement of bright flowers and large-leafed greenery fixed centrally in the composition. Lilies rendered in bright shades of red and orange are surrounded by broad ferns tall bamboo and dainty budding flowers and are flanked by a tropical green tree frog and perching monarch butterfly.

Though the piece is fixed there is a palpable sense of motion to it; the butterfly seems to have just alighted the frog is poised to hop out from under its floral cover and the foliage seems on the verge of swaying in a light breeze. Webb fills in the space between the plant leaves and stalks with shades of blue from jewel-toned to a near-grey. This creates an eye-catching and brightening balance between the represented wildlife and the stark white of the paper.

Where “Tiger Lily” showcases its still-life from some distance “Small Bouquet” features a close-up view of small-petalled and deep purple flowers that are framed by graceful heart-shaped leaves. Both images invite the viewer to come closer and appreciate them privately encouraging a personal and quiet experience.

They likewise demonstrate Webb’s ultimate hope for the works that she creates. While Webb always makes art that gives her joy and is unwilling to work in styles that are trending or “popular” for that reason alone she also uses her art to cultivate an appreciation for the natural world.

With the responsibilities and efforts of domestic duties largely completed Webb has more recently been able to focus solely on her art practice opening up more time for experimentation. Webb remarks with a good-natured and contagious laugh that art is both what she has always done and the only thing that she can do. This dogged preoccupation with her craft Webb says has led her to pursue many creative avenues and try out an impressive array of artistic techniques.

Along with watercolor painting she works often in three dimensions creating dynamic mobiles works of sculpture and jewelry. She likewise continues to work with paint creating landscapes seascapes still-life compositions and abstracts in watercolors and acrylics and applying them to materials like canvas board and paper.

Webb’s work is palpably adventurous and joyful mimicking her own creative spirit. This excitement is evident throughout her oeuvre but especially in Webb’s most recent paintings which feature vibrant color palettes and visually arresting combinations of domestic and natural life. Her larger acrylic works on paper and canvas like “Bell Flower” and “White Pitcher” add high-contrast to brightly colored petals with bold black backgrounds and thickly painted lines. These pieces are composed in a graphic style with large brushstrokes wild and textural paint application and flattened surfaces that contrast dramatically with her watercolor works. Indeed they seem to gesture towards abstraction another feature of her newest art practices.

In more abstracted pieces like “Red Devil” and “Scramble ” both acrylic works on canvas Webb’s passion for color is on grand display. She describes the role of color theory in her practice: “Color influences me. I love the juxtaposition of opposites on the color wheel.”

“Red Devil” is primarily composed in opposing shades of an orangey-red and pale blue with complementary shades of purple and red. Webb includes many different line qualities and types of brushstrokes ranging from dotted paint and fine lines that appear to be made by a pencil or chalk pastel to broad swaths of paint applied with a palette knife or large brush or sponge.

Nature and the inherent variety of natural beauty is a primary motivator for Webb. Its influence appears across her practice and she says that the natural environment of coastal North Carolina is particularly appealing to her; inspiring landscapes seascapes and the manner of wildlife that appear in her representational work.

“The verdant growth here is just different from other places in the country ” she explains. “There is beauty everywhere here and you just have to open your eyes to see it.”

Perhaps the most unique way that the natural world finds its way into Webb’s work is in her wire mobiles. Inspired by the wire sculpture work of Alexander Calder pieces like “Flowers” and “Rectangles and Circles” depict nature in abstracted but dynamic form.

Calder moved in the French avant-garde circles of the 1940s and 1950s and it was his friend Marcel Duchamp who first used the term “mobile” — meaning both “motion” and “motive” in French — to describe Calder’s kinetic sculptures. At first Calder made figurative mobiles creating wire versions of his own drawings and then suspending them. But as his interest in the medium grew the pieces became more abstract and nature-focused resulting in iconic works like “Arc of Petals” (1941). Early versions of these included bits of scavenged glass and pottery where later ones featured flat metal shapes often painted in primary colors.

Webb’s kinetic sculptures are made of wire and paper rather than metal but like Calder’s are inspired by the idea that art and nature can actually interact in these pieces. Calder makes sense as one of many influences on Webb who like the avant-garde sculptor cannot be confined to a single movement or style of art. Also like Calder who received a degree in mechanical engineering before attending art school Webb describes herself as “part engineer.”

“I’ve always loved seeing the movement ” she says. The idea of using air to make something dance and sing visually makes me excited and happy — it’s an engineering thing. I think I am part engineer.”

The engineering part of Webb’s brain plays a prominent role in her work with fiber optics as well. Webb showed a piece incorporating fiber optics in the Cameron Art Museum’s lantern show last year and intends to push the role of fiber optics further in her submission this year. The show restricts all participants to the use of a single LED bulb and Webb says that this limitation helped inspire her to think innovatively.

As she states “I’m curious so I try different things. If they don’t work I either don’t talk about them or I keep trying to get them to work.” Merging both her artistic and engineering impulses this piece is sure to be a captivating stand-out.

Webb remarked often as we spoke about how happy art and the process of its creation makes her a truth that is abundantly clear in all of the diverse pieces that she creates. Reflecting her earnest and scientific curiosity about the world and a genuine joy in the beauty around her Webb’s work is exhilarating to see and fun to contemplate.