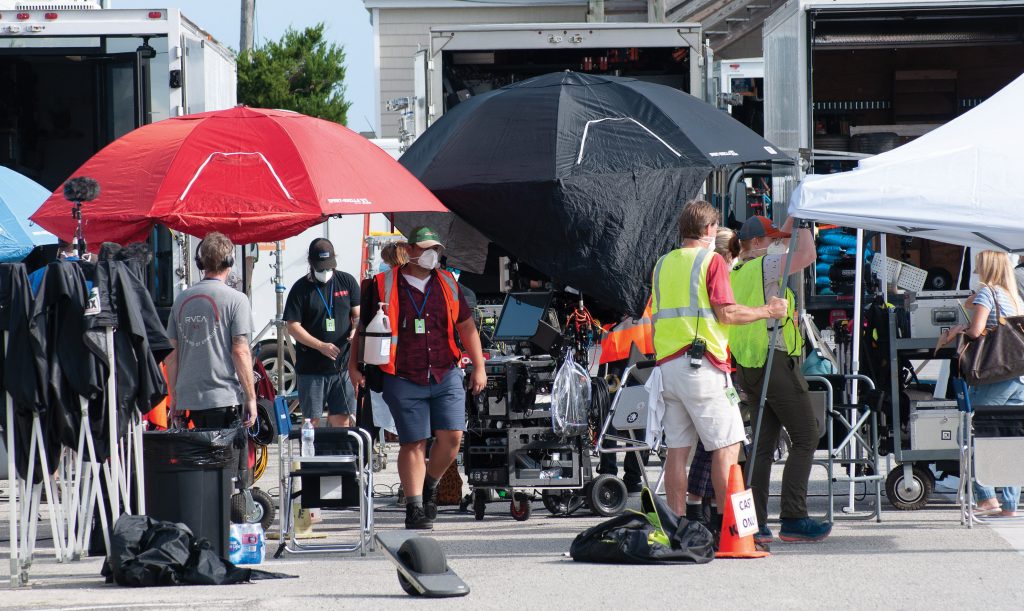 The cast and crew of the STARZ series Hightown filmed in Wrightsville Beach on October 23. Allison Potter

The year started off great for the local film industry and is finishing on a high note after a pandemic-related dip.

“2019 was the best year we had in five years. The momentum from that was strong through January and February, and then COVID hit and everything came to a grinding halt,” says Johnny Griffin, director of the Wilmington Regional Film Commission. “We didn’t have any work here for five or six months. We’ve come back and things are looking good for the end of the year. Even though filming is down overall in 2020, we will still probably do more business than we did in 2016, ’17 or ’18.”

Filming continued for the STARZ series Hightown in October at the Oceanic restaurant and Hanover Seaside Club in Wrightsville Beach. Griffin says there are a lot of inquiries regarding upcoming television series and feature films, but nothing new is confirmed for 2021.

A number of factors make Wilmington ideal for film: the weather, the combined experience of EUE/Screen Gems crew and other local industry professionals, and state film incentives.

“One of the things we have is an extensive local crew base,” Griffin says. “Most productions hire about 90 to 95 percent of crew from people who live here. So that is very important for us. Even though we have a full range of seasons, winter is relatively mild so productions can shoot here in the wintertime. And our history of being in business for 35-years plus. We’re an established industry with established vendors and crew who know how to make productions here.”

North Carolina offers a 25 percent rebate on qualifying expenses made by productions while in-state as its film incentive. The rebate is funded through the N.C. Film and Entertainment Grant.

Griffin says keeping film incentives is crucial to staying in business. He appeals to the public to thank elected officials for making that possible. “If you have a chance to interact with our local elected officials, let them know you appreciate what they have done for the film community.”

The only negative Griffin laughingly mentions is that clients would like to see direct flights from Los Angeles to ILM so they don’t have to change planes. But he’s quick to point out that the EUE/Screen Gems studio is less than 3 miles from the airport.

“What we tell them is you do have to take a connecting flight, but the experience you find when you land at this airport is going to be so much easier to navigate,” he says. “Once you land here, you can be in the studio at work in 10 to 15 minutes.”