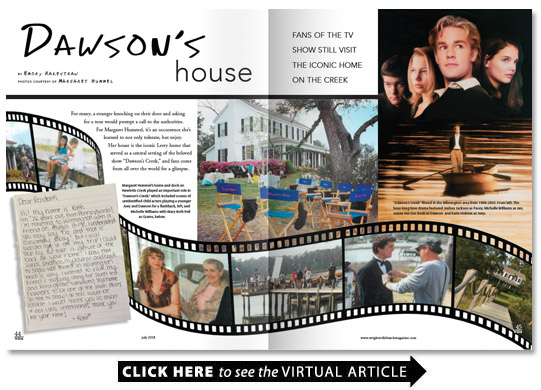 For many a stranger knocking on their door and asking for a tour would prompt a call to the authorities. For Margaret Hummel it’s an occurrence she’s learned to not only tolerate but enjoy. Her house is the iconic Leery home that served as a central setting of the beloved show “Dawson’s Creek ” and fans come from all over the world for a glimpse.

When we watch our favorite TV programs or movies it’s more than the characters and plot that resonate; the setting helps guide our emotional process. That’s certainly true for fans of the popular teen drama “Dawson’s Creek ” set in the coastal town of Capeside Massachusetts but actually filmed in and around Wilmington Wrightsville Beach and Southport.

The town’s idyllic places — creeks where teenagers row their boats to each other’s homes quaint downtown streets and gorgeous houses on the water — helped form a bond between viewer and character and remain popular with fans today 15 years after the show went off the air. Devotees still flock to the Port City to experience the locations firsthand.

For fans of “Dawson’s Creek ” nowhere is as iconic as Dawson Leery’s house. From the ladder Joey climbed to Dawson’s room to the dock where the friends met frequently it’s more than a physical place; it’s a metaphor for what the show means to devoted viewers who tuned in faithfully every Wednesday night.

For Margaret Hummel this means strangers strolling in her yard asking for one glimpse one picture one moment to relive the show.

In real life the Leery residence is the Hummel residence. Margaret’s grandfather built the house which sits on Hewletts Creek in 1880. She grew up here moved away for a time and eventually moved back. Today Margaret lives there with her husband Bill Hummel daughter Cissy Russell and Cissy’s partner Lance Bowser.

People come from all over the world — Brazil England Italy Japan — often bearing gifts. Some send handwritten letters asking permission first. Although the family prefers that they ask permission some just show up. The frequency of visitors can range from a few a week to three separate groups in a single day.

That often confuses first-time visitors. When arriving you expect to see Dawson’s house but only after walking around to the front and seeing the creek and dock do you feel as if you’re on set.

Visiting the house was a dream come true for Zoe Cittern. When she and her husband planned a holiday from England to Canada and the U.S. adding Wilmington to the itinerary was non-negotiable for the “Dawson’s Creek” fan.

“Anytime you see a filming location in real life it’s never quite as it appears in the television show. Especially since ‘Dawson’s Creek’ aired 20 years ago now so things don’t always look the same ” Cittern says. “However the house and the dock [are] so recognizable and the creek looks the same as it does in the show. It looked just as magical in real life. I always loved the small-town feel of ‘Dawson’s Creek’ and how Joey would row her boat to Dawson’s house and so it was amazing to see it in real life.”

The water is how the show’s crew first discovered the house while scouting for locations. They looked for two adjacent homes one to serve as Gram’s home and one to serve as the Leery residence. Hummel says they’d travel up the creek stopping to take pictures. Eventually they asked Margaret and Bill if they’d allow their home to be used in the show. They agreed not knowing the extent to which the show would eventually impact not only millions of fans but an entire generation.

“Dawson’s Creek” ran for six seasons from 1998 to 2003. It became the coming-of-age show for many teenagers growing up around the turn of the century.

The pilot starts with Joey telling Dawson it might be inappropriate to have sleepovers now that they’ve turned 15. The childhood best friends begin to experience their first crushes and feelings of romantic love. As the show continues they go through hardship family fights and divorce reconciliation the death of loved ones and characters moving away to craft their own destiny.

Devoted viewers grew up with the characters and in many ways found both an escape from and guidance for their own problems with adolescence.

“I think for a lot of people the teenage years are difficult and having a television show that they can escape to even just for an hour can help — especially when a show is so relevant to perhaps what they are going through in real life ” Cittern says. “I think ‘Dawson’s’ was also special because it was located in a small town it was so picturesque it revolved around real issues and it wasn’t trying to be TV’s newest glitzy teen soap. It pushed boundaries and it wasn’t condescending to teenagers. The way they spoke was new and refreshing.”

Most of the actors were unknowns embarking on their first big roles. Katie Holmes played the role of Joey Dawson’s best friend and eventual love interest. She spends large chunks of the series caught in a love triangle between Dawson played by James Van Der Beek and his friend Pacey portrayed by Joshua Jackson. Michelle Williams was cast in the role of bad-girl Jen from New York who becomes Dawson’s new next-door neighbor when she is sent to live with her grandmother played by Mary Beth Peil.

The filming crew was a mixture of out-of-towners and local pros who had moved to the area when Wilmington was known as the Hollywood of the East.

“Each filming season the whole crew would come to the house every couple of weeks for a day or two at a time and completely take over the yard ” Russell says. “They’d bring semi-trailers full of equipment and anywhere from 75 to 100 people — actors directors and crew. There was a table with every kind of snack you can imagine set up near the house and a food truck and tent at another house in the neighborhood for catered meals which we were invited to attend. I remember being really impressed with how efficient the whole operation was and how courteous they were to us. They would keep us in the loop by giving us copies of the script so we’d know what scene they were filming that day.”

“Dawson’s Creek” became the second mainstream TV show to shoot locally; “Matlock” filmed in Wilmington from 1993 through 1995. “Dawson’s” utilized locations in both New Hanover and Brunswick counties. Alderman Hall on the University of North Carolina Wilmington campus served as the exterior of Capeside High School. Elijah’s Restaurant on the Cape Fear River is Pacey’s restaurant in the final season. Various locations from Wilmington’s Riverwalk all the way to Southport’s waterfront are still visited by fans.

Yet for many nothing is more iconic than Dawson’s house on the creek.

“Some [fans] have waited years it’s a dream of a lifetime that’s what they say ” Bowser says. “It’s one of the best things that’s ever happened to them you can see it.”

Bowser has very much enjoyed the role of connecting with fans and scheduling their visits. Russell describes him as a sort of secretary and says it’s like being a celebrity on a small basis. The visitors are typically in their mid-30s like Stefanie Adams who grew up watching the show.

“I had always wanted to see Dawson’s house because it was the heart of the show ” she says. “On our annual trip to North Carolina [from Pennsylvania] I set out to find the house. I did some research and was able to find the address. My husband and I found the mailbox with the address and … a ‘no trespassing’ sign. My husband simply said ‘find another way ‘ and I did. I wrote a letter to the owners and asked to visit the next summer. I was beyond thrilled to receive an email welcoming us to visit anytime. I saved printed and framed that email!”

She says she will never forget the long winding unpaved road that leads to the house and the friendliness of Margaret and Bill.

Devoted fans like Adams and Cittern see the beauty of the creek the sweeping lawn leading to the water the dock and they imagine fictitious characters in a made-up town.

But for the family this is their home. It existed long before the show or characters. Unlike Dawson they really do live here. So far the fans have treated their property with the utmost respect and they hope visitors always remember that it’s a residence and not a set. They also hope visitors stay off their neighbors’ property which wasn’t part of the show.

As the characters often did the family sits on the wide screened-in porch. On a nice day the smell of saltwater flows through the air the sun sparkles against the water and for a moment the world is still and everything is in unison. It’s pure relaxation with a beautiful view to go with it.

Until that is some stranger strolls around the front camera in hand asking to see Dawson’s house.